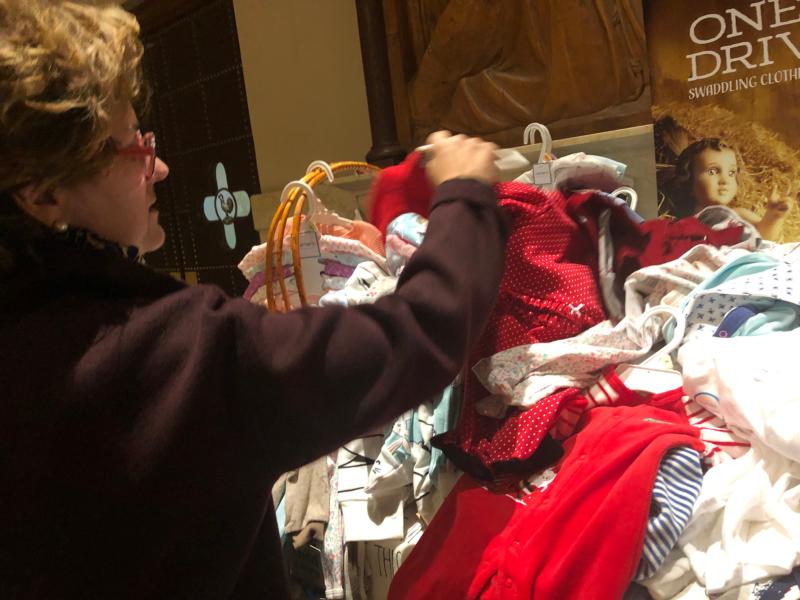 Michele Burke Bowe, president of the Holy Land Family Hospital of Bethlehem looks over some onesies at Washington's Franciscan Monastery of the Holy Land Dec. 13, 2019. She will take the donated clothes to Bethlehem in January. (CNS photo/Rhina Guidos)

The Gospel of Luke mentions, after all, that Mary wrapped the baby Jesus in “swaddling clothes and laid him in a manger, because there was no room for them in the inn.”

But the “swaddling clothes” of modern times come in the form of onesies, the one-piece clothing item for babies, and it’s the indispensable item the Holy Family Hospital of Bethlehem Foundation has been asking for as a gift to give to newborns in Christ’s birthplace.

Through a clothing drive at Washington’s Franciscan Monastery of the Holy Land in America, the hospital has collected a mound of them underneath an altar of St. Francis and the first nativity depiction.

“One of them had a note, ‘With love from Howard University,'” said Father Jim Gardiner, an Atonement friar, who blessed the items Dec. 13, recalling one of the messages left behind by a donor.

There’s something about clothing a baby in Bethlehem for Christmas, said Michele Burke Bowe, of the hospital’s Washington-based foundation, about the success of the clothing drive now in its fourth year. She takes the items to the hospital, operated by the Order of Malta, in January.

When Israel froze in February the tax revenues it collects on behalf of the Palestinian Authority, it caused an economic crisis for families living in the West Bank, where Bethlehem is located. Many families have been going without heat or water because of the crisis, so for new moms already feeling vulnerable to at least have an article of clothing, “it’s a blessing to have an outfit for their child,” when the baby is born, said Bowe.

The Catholic hospital expects its staff will deliver about 4,700 babies this year, including some in need of emergency intensive care and born to struggling families who may not otherwise be able to afford health care for their newborn, said Bowe.

Many Palestinian families living there also are limited by a barrier wall of some 258 miles that restricts movement and access to jobs and goods and to hospitals.

That sometimes also leads to loss of life. But the hospital is there because of one of the core teachings of Catholicism.

“As Catholics, we value life,” she told Catholic News Service.

At the hospital, families are helped regardless of creed or economic situation.

“They’re so grateful just to have something,” Bowe said.

Though the clothing drives ends in December, the foundation accepts donations for its other works, including a Neonatal Intensive Care Unit cares for critically ill newborns, at www.birthplaceofhope.org. 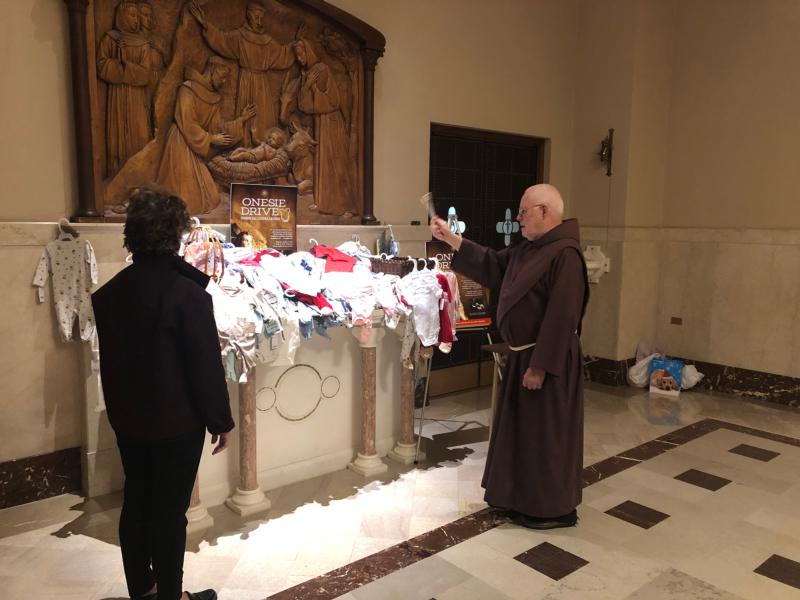 NEXT: ‘God has all of me:’ Crisis led woman to life as virgin