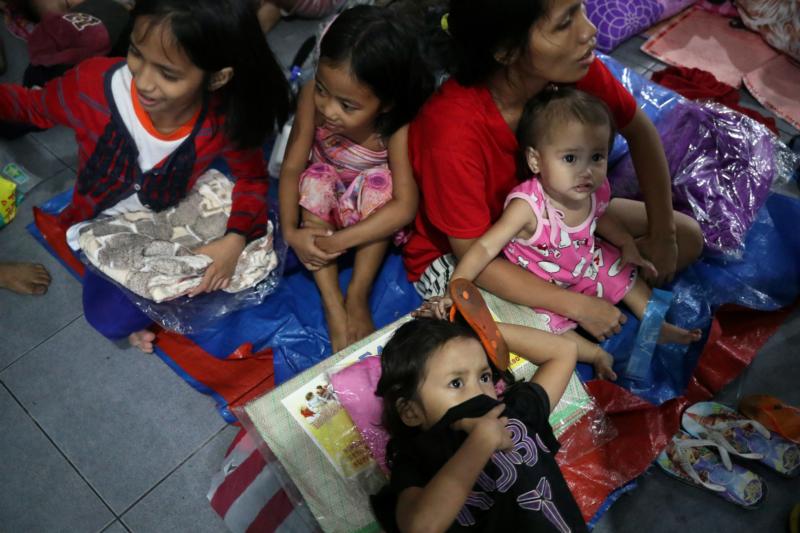 A displaced family gathers at an evacuation center in Manila, Philippines, Dec. 3, 2019, in the aftermath of Typhoon Kammuri. Kammuri left at least four people dead, and authorities estimated that about half a million people were displaced. (CNS photo/Ann Wang, Reuters)

Ucanews.org reported Manila’s international airport was shut down for 12 hours as Typhoon Kammuri barreled across the country, bringing with it powerful winds and heavy rain.

Authorities estimated that about half a million people were displaced; many of them were ordered to leave their homes hours before the typhoon struck.

In Legazpi Diocese, one of the worst-affected areas, Father Rex Arjona, the diocesan social action director, said his teams had assessed the immediate needs of people.

“The worst is over for us,” he said, adding that his office was still waiting for a complete picture of the situation. “We will go around as much as we can to get a more substantial assessment.”

In the Apostolic Vicariate of San Jose on Mindoro Island, the Catholic Church’s radio station stopped broadcasting after the station’s antenna was blown over by strong winds.

“Let us prepare whatever we have to help, especially since Christmas is near,” said the priest. “Let us give help to everyone, even those with different religions.”

Earlier, Gumaca Diocese had opened its churches and convents for people affected by the typhoon.

“We prepared our parishes,” said Bishop Victor Ocampo of Gumaca, adding that food and other relief items were distributed to disaster victims.

PREVIOUS: Governments urged to shed fear of working with churches on persecution

NEXT: Irish bishops: Christians must lead by example, welcome migrants