Governments urged to shed fear of working with churches on persecution 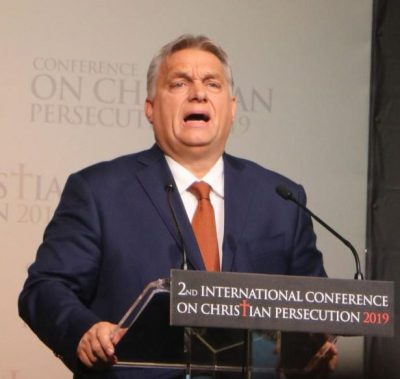 BUDAPEST, Hungary (CNS) — Speakers at the second International Conference on Christian Persecution called upon governments to shed the “fear of working with the churches.”

Setting the tone for the Nov. 26-28 conference, Tristan Azbej, secretary of the Hungarian government’s Aid for Persecuted Christians program, called for collaboration in responding to the plight of Christians whose religious rights are eroding worldwide.

“We are here because Christianity has a culture of action. It is time for action by working together with all for a historic change in fighting persecution,” Azbej said.

The Hungarian leader said his government is “convinced that the problems facing Christianity in Europe and the persecution of Christians in Africa and the Middle East cannot be separated.”

Rejecting migration as a solution to persecution, Orban cautioned against demographic changes in individual European nations and warned that members of the Islamic State group were infiltrating migrant communities.

“People must be encouraged to live and flourish in the lands in which their ancestors have lived for centuries. What we must help them to do is not to move away, but to stay in their homes,” Orban said.

Chaldean Archbishop Najib Mikhael Moussa of Mosul, Iraq, said a way to help persecuted Christians is to “teach them how to resist and defend their faith, their life, not by destructive weapons but by the art of using pencil and education to rebuild true human construction.”

The archbishop called for support for Christians who have begun returning to their native communities in northern Iraq years after they fled Islamic State forces in the region.

“We want to stay over there forever,” he told the conference.

Russian Orthodox Metropolitan Hilarion of Volokolamsk endorsed Archbishop Moussa’s plea, saying, “We have never heard from the leaders of the Middle Eastern churches any call to leave homeland. On the contrary, they say unanimously that Christians ought to remain in their homeland.”

“The world community need to hear the voices of Christian countries and clergy in defense of African Christians who are being exterminated before our eyes,” he added.

Emphasizing the need for interreligious approach to end persecution, Metropolitan Hilarion suggested a normal future for Christians is not possible without the development of relations with other religions.

Citing a series of diplomatic engagements by some of the European nations to counter perceptions since 2010, the Metropolitan noted that “if all these countries were to unite their efforts, it would be possible to achieve greater result.”

Andrew Walther, vice president for communications and strategic planning with the Knights of Columbus, told the conference on its final day that persecuted Christians could be assisted “first by providing direct humanitarian assistance or policy changes that help them, and second, by revealing and thus discrediting the horrific nature of ideologies that persecute.”

“Not only must those concerned about Christian persecution speak the truth, but we also must be well-enough informed to defend the truth from the biases or misunderstandings of those in our own countries,” Walther said.

In a message read by an American official to the conference, U.S. President Donald Trump noted that the conference served as a reminder to safeguard religious freedom.

The message said the U.S. is “spearheading the International Religious Freedom Alliance as part of our ongoing efforts to confront religious persecution around the world.”

NEXT: After typhoon, Philippine dioceses deploy teams to help displaced