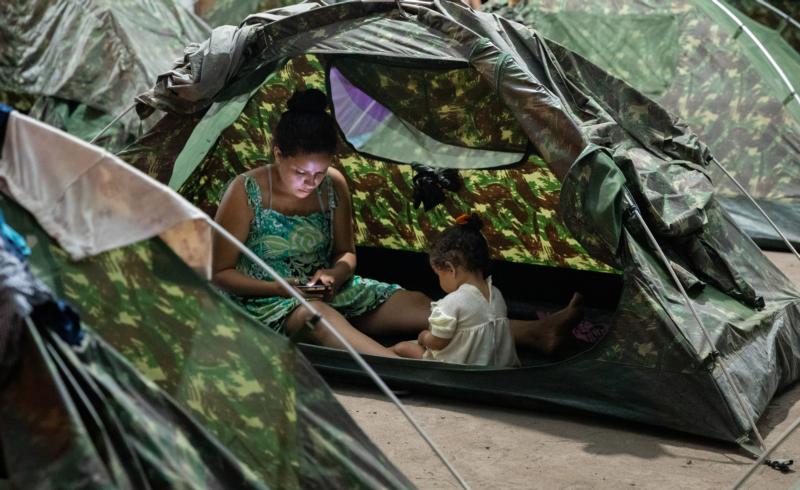 A woman and child are seen May 8, 2019, inside a tent in the bus station housing Venezuelan refugees in Boa Vista, Brazil. About 500 Venezuelans cross the border into Brazil daily basis, according to Catholic officials. (CNS photo/courtesy AVSI)

SALVADOR, Brazil (CNS) — While reports indicate that the migration of Venezuelan refugees into Brazil and Colombia has eased since the first half of 2019, aid workers in border communities said the influx of people has not slowed appreciably.

Mansur has determined that the situation at the border is deteriorating.

“The stronger (refugees) came first, in 2018 and at the beginning of the year. Now we are seeing more desperate, more vulnerable Venezuelans crossing, with little money and debilitating health,” Mansur said.

AVSI Brasil, part of Italy-based AVSI Foundation, and organizations linked to the Catholic Church, including Caritas Brazil and the Diocese of Roraima, have tried to make the lives of those crossing the border easier by supplying shelter, food and blankets.

Since July 2018, AVSI and UNCHR, the United Nations refugee agency, have worked in the border towns of Pacaraima and Boa Vista, Roraima’s state capital.

Lucas Matos is among the dozens of AVSI employees sent to the region.

Born in Guaruja, near Sao Paulo, Matos has been in Roraima for the 18 months assisting the Venezuelans. Although he majored in exact sciences at the university, Matos says he began volunteering at nongovernmental organizations like the Red Cross while working in the maritime industry in Manaus, Amazonas, and felt social work and helping others was his calling.

“I moved to Roraima the week after I got married,” he said lightheartedly in a telephone interview with Catholic News Service. After two months alone in the Amazon region, his wife, Tamara, joined him. Today both work for AVSI, but at different Boa Vista shelters.

Matos is in charge of the Rondon 1 shelter, which houses some of the most vulnerable refugees: those accompanying children.

“Most of the time it is the mother, but sometimes we get an uncle or an aunt or even a grandmother crossing the border with several minors. If we have room, this is where they stay,” he said.

The shelter can house 800 people and it is always filled.

“It is difficult to leave these shelters. These families often come separately and they don’t want to be relocated to a faraway place before they are reunited.”

Matos said that six months ago, the average refugee stayed at the shelters for three and a half months, but that the stay has extended to four to five months today.

For those who are not fortunate enough to land in a shelter, the solution is to sleep on park benches and doorways.

“In the early evening, approximately 1,000 people gather at the bus station, where the (Brazilian) armed forces puts up temporary tents for these people to sleep, or they would be sleeping on the streets,” Matos said.

The images of the children who pass through the shelter stay with Matos for a long time.

The memory of one little boy, in particular, continues. Keiniel Ramos, 7, crossed the border with his mother and two siblings early this year.

“He was my shadow. Everywhere I went, there he was following my footsteps. After a while, I would let him hold my clipboard as I made my rounds,” Matos said.

Ramos’ mother gave birth to another child while in the shelter. For security reasons, the family was transferred to another shelter. Soon, Matos said, they will be relocated to another Brazilian town. “Although he is no longer living here, he comes here almost every day to say ‘hello,'” Matos said of the boy.

Another refugee who Matos said he will remember is an elderly woman who crossed the border with her ill husband.

“The husband needed medical treatment so they came over the border and stayed in this shelter. They came with nothing; no documents … very few personal belongings,” he said.

“When the husband died, this little old lady, who is about my mother’s age, was left with nothing but a document which states where her husband is buried in Boa Vista. That is all she has … a piece of paper to tell her where they buried her husband of 25 years,” he said softly.

According to Matos, the elderly woman has no family and nowhere to go. “We will try to keep her here as long as possible. What else can we do?”

Working so closely with the refugees, shelter staff form bonds with many of the Venezuelans.

“We try to do our job with as little emotional attachment and involvement as possible, but I can tell you from experience, it is almost impossible to do that with some of the people here. We naturally become attached and when they leave we feel we are losing a friend,” Matos said.

“It is a stressful job. It takes its toll on you. I don’t know if I could have done it if my wife wasn’t with me here in Roraima. I know of many staff members that will work for a year, a year and a half, and then ask to leave … to go back to their families and homes. I don’t blame them,” he said.

“The staff needs to have a high emotional intelligence level to do this job. You just can’t be in Roraima for the money,” said Maria Laura Cassiano, AVSI’s refugee program manager.

Cassiano said the shelters are a temporary solution, a short-term emergency relief. She argued they are not sustainable for a longer period of time.

“I look at these people’s (refugees) faces and I see resilience,” she said. “What happens to these folks when the rest of the world forgets them? We need a plan for when the emergency is over.”

NEXT: Set up a Nativity scene, pray there before Christmas, pope suggests