Set up a Nativity scene, pray there before Christmas, pope suggests 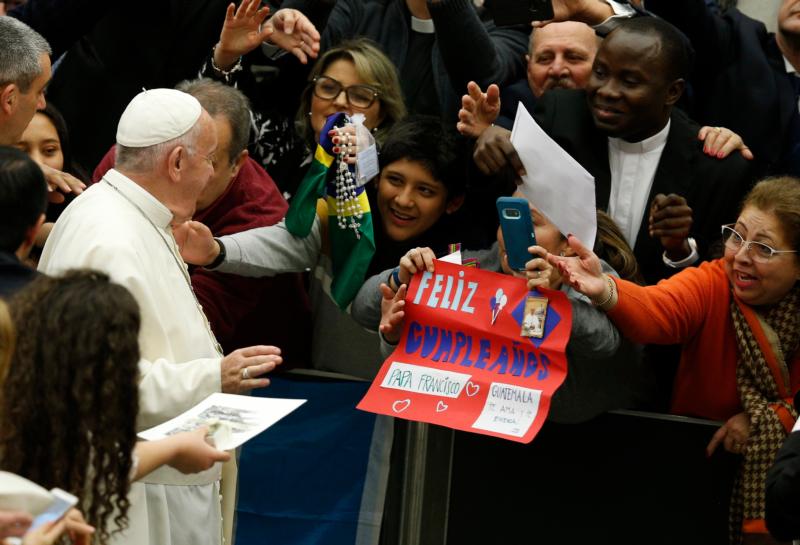 A woman holds a sign wishing Pope Francis a happy birthday as he arrives to lead his general audience in Paul VI hall at the Vatican Dec. 18, 2019. The pope celebrated his 83rd birthday Dec. 17. (CNS photo/Paul Haring)

VATICAN CITY (CNS) — Putting up a Nativity scene before Christmas is a reminder to stop and remember what Christmas is really about and to prepare one’s heart like a manger for the coming of Christ, Pope Francis said.

At his weekly general audience Dec. 18, the last audience before Christmas, Pope Francis dedicated his catechesis to the Nativity scene and to Jesus’ birth.

But before an aide could read the Gospel selection about Jesus’ birth, a group in the Vatican audience hall insisted on celebrating another birthday. Thousands joined in singing “Happy Birthday” to Pope Francis, who celebrated his 83rd birthday the previous day.

Picking up themes from his new apostolic letter on the meaning and importance of Nativity scenes, Pope Francis told the crowd that the creche is “like a living Gospel” and should be set up in “the places where we live,” including home, school, workplaces, hospitals, prisons and public squares.

In the midst of daily life, he said, the Nativity scene is a reminder “that God did not remain invisible in heaven, but came to earth, that he was made man, a baby. God always has been close to his people, but when he was incarnated and born, he became very close, super close, the closest.”

A Nativity scene, he said, “celebrates the closeness of God.”

Pope Francis said he likes how most Nativity scenes portray the baby Jesus with his arms open “to tell us that God came to embrace our humanity,” which helps people discover “the nearness of God. It is to rediscover that God is real, that God is concrete, that God is alive and vibrant. He’s not a far-off lord or detached judge, but he is humble love that came down to us.”

In the crazy days before Christmas, when there seems to be so much to do and so much noise, Pope Francis encouraged people to pause for a moment of silence in front of a Nativity scene “and confide to the Lord what’s going on in your life. Talk to him about the people and situations closest to your heart. With him, take stock of the year that is ending, sharing your hopes and worries.”

Nativity scenes can portray all sorts of activities and events of daily life and family life, too, he said. “Yesterday I was given a card of a special Nativity scene, a little one, that was called ‘We’ll Let Mom Sleep.’ And there was Mary sleeping and Joseph with the baby Jesus, trying to get him to sleep. How many of you husbands and wives have had to take turns in the night to care for the baby who was crying and crying and crying? Letting Mom rest — it’s the tenderness of a family, of a marriage.”

In the simplicity and poverty of the manger, he said, “the Nativity scene is an artisanal image of peace,” a reminder needed in a world where “every day many weapons are manufactured, and many violent images are put before our eyes and hearts.”

“While the ruin of humanity is everyone taking their own path, in the Nativity scene everyone moves toward Jesus, the prince of peace,” the pope said. “Around him, in that grotto lit by tenderness, harmony is rediscovered. There were find very different people gathered together — Magi and shepherds, kings and the poor, little ones and the elderly.”

Addressing Arab-speakers at the end of the audience, he said: “The manger Jesus longs for is your heart so that he can give you his unshakable peace and eternal life. This is what will change the world.”

And the pope told everyone, “I hope you will set up a Nativity scene at home because it is an occasion to invite Jesus into your life.

“Putting up a Nativity scene is like opening the door and saying, ‘Come in, Jesus,'” he said. “This invitation we make to Jesus to enter our lives makes his closeness concrete. Because if Jesus lives in us, we are reborn. And if we are reborn, it truly is Christmas.”

NEXT: Bishop, former chaplain to queen, to be received into Catholic Church