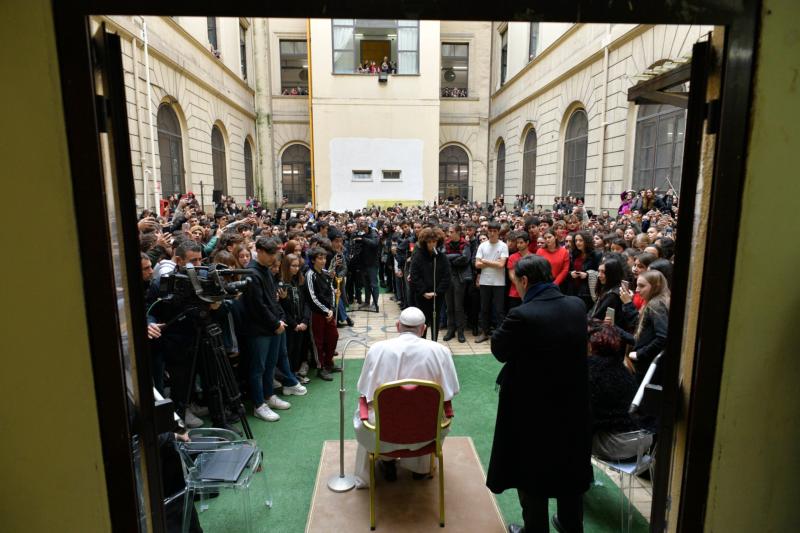 Pope Francis answers questions from students at Rome’s Pilo Albertelli High School Dec. 20, 2019. He made a surprise visit to the public school on the last day before Christmas vacation. (CNS photo/Vatican Media)

ROME (CNS) — On the last day of school before Christmas vacation, the students of Rome’s Pilo Albertelli High School were summoned to the school’s courtyard.

Some 800 students met Pope Francis there Dec. 20; he was ready to listen to their questions and offer his reflections.

The pope was accompanied by Andrea Monda, director of the Vatican newspaper, who until last year was a religion teacher at the public school near the Basilica of St. Mary Major.

The Vatican did not release a transcript of the encounter. According to L’Osservatore Romano, the Vatican newspaper, Pope Francis responded to a question on “the theme of solitude, which can grip you and throw you into melancholy,” but he also spoke of the importance of learning to be alone to think, to pray, to review one’s day and one’s actions.

He responded to a question about love and spoke about self-giving, which is something people need to learn as they mature. It’s a matter of “pruning,” he said, but it leads to real maturity.

As usual, the newspaper said, the pope used stories from his own teen and young adult years in Argentina to illustrate his points, including his insistence that living in a multicultural, multireligious society is a good thing and that, by their example, Christians can witness to their faith without “proselytizing.”

The Vatican newspaper reporter said everyone in the courtyard seemed shocked when the school bell rang, then they broke out in laughter.

“At that point, the pope stood up and wished everyone a merry Christmas,” but before leaving, he took another question, this one about war and peace, particularly about deterrence — threatening destruction to maintain peace.

Pope Francis told the students that he responded to that precise question in a video he had just recorded with Antonio Guterres, the U.N. secretary-general.