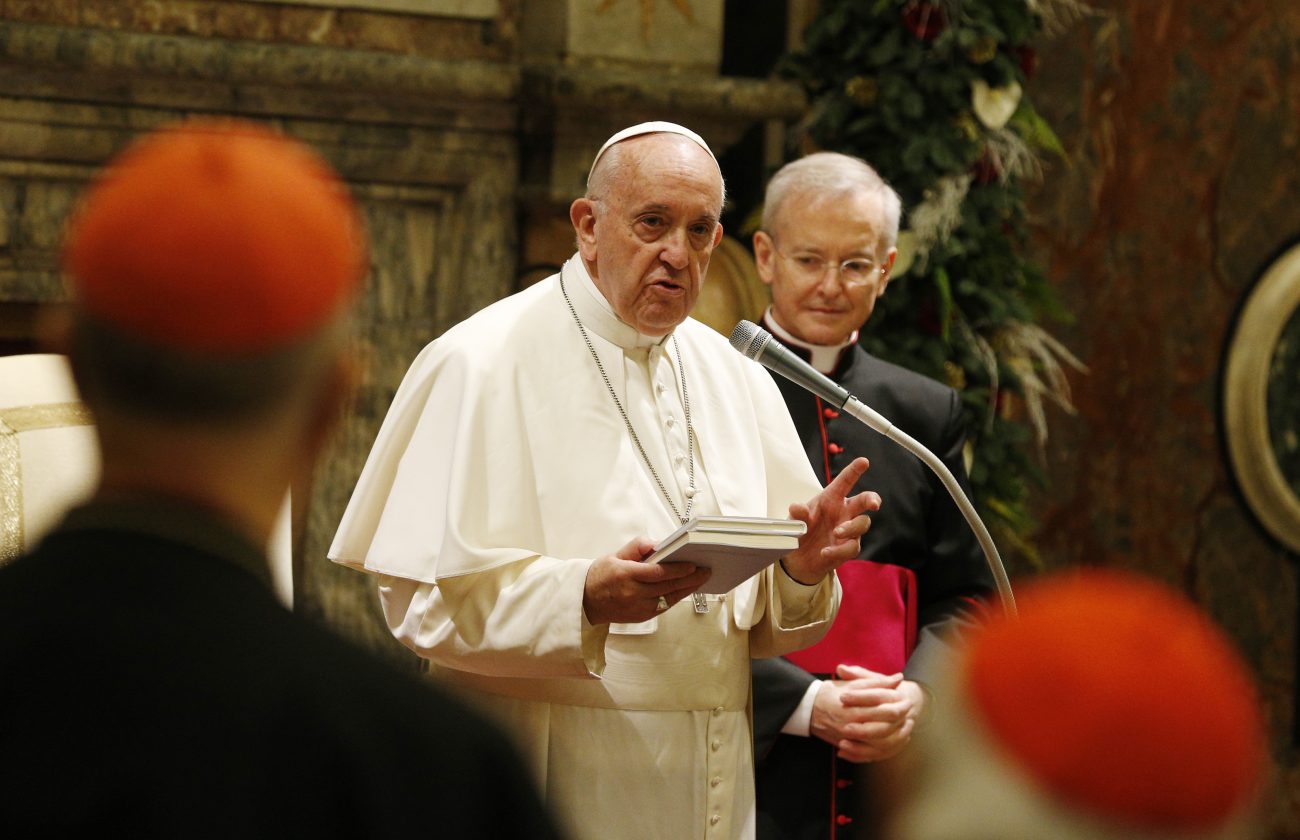 Pope Francis speaks during his annual audience to give Christmas greetings to members of the Roman Curia at the Vatican Dec. 21, 2019. (CNS photo/Paul Haring)

VATICAN CITY (CNS) — The ongoing reform of the Roman Curia is a necessary part of the Catholic Church’s fidelity to its mission to proclaim the Gospel, recognizing that very few countries today can be described as “Christian” and that new ways of evangelizing are necessary, Pope Francis said.

But attempts to meet the new challenges are threatened by “the temptation of assume an attitude of rigidity,” the pope said Dec. 21 during his traditional pre-Christmas meeting with cardinals and top officials of Vatican offices.

“Rigidity, which is born of the fear of change, ends up erecting fences and obstacles on the terrain of the common good, turning it into a minefield of incomprehension and of hatred,” the pope said. “And today this temptation of rigidity has become very evident.”

Pope Francis quoted from St. John Henry Newman, whom he canonized in October: “To live is to change, and to be perfect is to have changed often.”

“Obviously,” the pope said, “it’s not about seeking change for change’s sake or about following fashions, but of having the conviction that development and growth are characteristic of earthly and human life while, from a believer’s perspective, at the center of everything there is the stability of God.”

“For Newman,” he said, “change was conversion, that is, an interior transformation,” which clearly shows that the Christian life is a pilgrimage, a process of moving closer to God.

Conversion and transformation are part of an individual’s response to God’s call, but also must take place within the Curia, which is called to be at the service of the church in its efforts to share the Gospel, he said.

Looking specifically at the Curia reform process and the planned reorganization of Vatican offices according to the draft constitution, “Praedicate Evangelium,” (“Preach the Gospel”), Pope Francis addressed the question of merging the Congregation for the Evangelization of Peoples with the Pontifical Council for Promoting New Evangelization and placing the office ahead of the Congregation for the Doctrine of the Faith on the Vatican’s organizational chart.

But first he told the cardinals and top Curia officials that the church engages with the changing world “anchored principally on fidelity to the deposit of faith and tradition.”

The Curia reform project, he said, “has never had the presumption of acting as if nothing existed before; on the contrary, it focused on valuing what good was done” and on preserving its “roots” so that it can be fruitful.

“Invoking memory does not mean grasping on to self-preservation, but recalling the life and vitality of a process in continual development,” he said. “Memory is not static, it’s dynamic. By its nature it implies movement.”

As he has often done, Pope Francis quoted the 19th-century composer Gustav Mahler, who said, “Tradition is not the worship of ashes, but the preservation of fire.”

The pope discussed the changes proposed for the doctrinal congregation and the Congregation for the Evangelization of Peoples, the large Curia office that supports and oversees church efforts in lands traditionally known as “missionary territory” — like Africa and Asia.

The two congregations, he said, were instituted “in an age when it was easier to distinguish between two fairly well-defined shores: a Christian world on one side and a world still to be evangelized on the other.”

“This situation no longer exists,” the pope said.

“In fact,” he said, “the populations that still have not received the proclamation of the Gospel do not live only on non-Western continents, but live everywhere, especially in the large urban concentrations, which require their own specific pastoral work.”

“Christendom no longer exists,” he said. “Today we are not the only ones who produce culture, nor are we the first or the most listened to.”

Christianity, “especially in Europe, but also in a large part of the West, is no longer an obvious premise of our common life, but rather it is often denied, derided, marginalized or ridiculed.”

Evangelization and the “new evangelization” St. John Paul II called for are urgent needs, the pope said, which is why the Curia itself must change and adapt.

Pope Francis told the Curia officials there are and will be challenges and complications “for the simple fact that between a glorious past and a creative future on the move, we find the present in which there are people who necessarily need time to mature,” and there are “juridical and institutional questions that must be resolved gradually, without magic formulas or shortcuts.”

The pope also spoke about the Dicastery for Promoting Integral Human Development and why he merged into it the previously separate offices for justice and peace, charity, migrants and refugees and health care.

“In all its being and acting, the church is called to promote the integral development of the human person in the light of the Gospel,” he said.

The church does so, he continued, by “serving the weakest and most marginalized, in particularly forced migrants, who represent at this time a cry in the desert of our humanity” and are “the symbol of all those thrown away by our globalized society.”

The church, he said, “is called to testify that for God no one is a ‘stranger’ or ‘excluded.’ It is called to awaken consciences numbed by indifference to the reality of the Mediterranean Sea, which has become for many, too many, a cemetery.”

Christmas, he told his top aides, “is the feast of God’s love for us, the divine love that inspires, guides and corrects change, and overcomes the human fear of leaving behind ‘security’ in order once more to embrace the ‘mystery.'”

After meeting the officials, Pope Francis went to the Vatican audience hall to greet Vatican employees and their families.

In his short talk, he urged them to give a smile for Christmas and to let themselves experience the smile of the newborn baby Jesus in the manger.

“Jesus is God’s smile,” the pope said. “He came to reveal the love of the heavenly Father, his goodness, and the first way he did that was by smiling at his parents, like every newborn in this world.”

Pope Francis urged the employees to spend a bit of time looking at a Nativity scene; “look at the baby Jesus and feel God smile at you and at all the poor of the earth, all those who await salvation, those who hope for a more fraternal world where there is no longer war or violence, where every man and woman can live with their dignity as sons and daughters of God.”

NEXT: Pope sets term of office for dean of College of Cardinals