Bishop, former chaplain to queen, to be received into Catholic Church 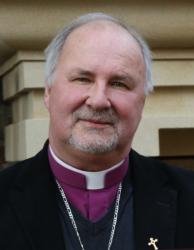 Bishop Gavin Ashenden of the Christian Episcopal Church will become a Catholic Dec. 22, 2019, at Shrewsbury Catholic cathedral in England. He is pictured in a Dec. 16 photo outside the cathedral. (CNS photo/courtesy Diocese of Shrewsbury)

SHREWSBURY, England (CNS) — A former chaplain to Queen Elizabeth II is to be received into the Catholic Church.

Bishop Gavin Ashenden of the Christian Episcopal Church will become a Catholic Dec. 22 in Shrewsbury cathedral. He said he had reached the conclusion that only the Roman Catholic and Orthodox churches “have the capacity to defend the faith” from the influence of secularism.

A Dec. 17 statement from the Diocese of Shrewsbury said Bishop Ashenden’s Anglican orders will be suspended and he will become a lay Catholic theologian.

In a Dec. 17 statement sent by email to Catholic News Service, the bishop said, “The claims and expression of the Catholic faith are the most profound and potent expression of apostolic and patristic belief” and that he now accepted the primacy of the pope.

Bishop Ashenden said he was grateful to Catholic Bishop Mark Davies of Shrewsbury and the Catholics of his diocese for the opportunity to “be reconciled to the church that gave birth to my earlier (Anglican) tradition.”

“I am especially grateful for the example and the prayers of St. John Henry Newman,” he said.

“He did his best to remain a faithful Anglican and renew his mother church with the vigor and integrity of the Catholic tradition,” he said. “Now, as then, however, his experience informs ours that the Church of England is inclined to be rooted in secularized culture rather than the integrity and insight of biblical, apostolic and patristic values.”

In a Dec. 17 statement, Bishop Davies said it was “very humbling to be able to receive a bishop of the Anglican tradition into full communion in the year of canonization of St. John Henry Newman.”

“I am conscious of the witness which Gavin Ashenden has given in the public square to the historic faith and values on which our society has been built,” he said. “I pray that this witness will continue to be an encouragement to many.”

Bishop Ashenden was a well-known figure in the Church of England and served as a chaplain to the queen from 2008 to 2017.

He resigned from his post, however, so he could publicly speak out against the reading of a chapter from the Quran at an interfaith service at St. Mary’s (Episcopal) Cathedral, Glasgow, Scotland. The passage explicitly denied the divinity of Jesus.

Soon afterward, he was ordained as missionary bishop for the U.K. and Europe by the Christian Episcopal Church, a traditionalist “continuing” Anglican jurisdiction founded in the United States in 1992.

Helen, his wife of 23 years, became a Catholic about two years ago.

PREVIOUS: Set up a Nativity scene, pray there before Christmas, pope suggests