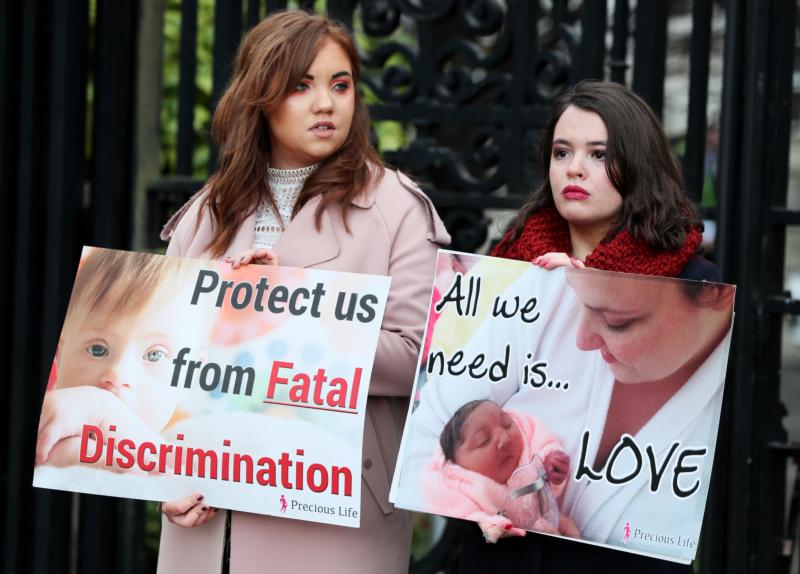 Pro-life supporters stand with signs outside the High Court in Belfast, Northern Ireland, Jan. 30, 2019. Britain’s bishops have made the right to life a priority for Catholics ahead of a general election in which two major political parties have promised to liberalize abortion laws. (CNS photo/Brian Lawless, Reuters)

MANCHESTER, England (CNS) — British bishops have made the right to life a priority for Catholics ahead of a general election in which two major political parties have promised to liberalize abortion laws.

A statement from the bishops of England and Wales, released Nov. 29, put the right to life at the top of a list of key issues they want Catholic voters to raise with parliamentary candidates ahead of the Dec. 12 election.

The bishops of Scotland also made abortion and euthanasia their primary concerns in a letter issued to voters Nov. 19.

Their statements came as the Labour Party and the Liberal Democrats, in their pre-election manifestoes, promised to reform abortion laws.

Labour has pledged to remove all criminal restrictions from the law, meaning abortion would be available on demand and up to the point of birth, a policy pro-life groups say would create one of the most extreme abortion regimes in the world.

The Liberal Democrats have said they would decriminalize abortion within the first 24 weeks of pregnancy and enforce exclusion zones around every abortion clinic to stop pro-life counseling and prayer vigils.

The ruling Conservative Party was silent about abortion in its election manifesto.

At present, under the 1967 Abortion Act, abortion is technically a crime in the U.K. unless certain conditions are met, such as two doctors declaring that there is a possible risk of injury to the mother’s mental and physical health if the abortion did not proceed. In practice it already is widely available simply on demand.

In their statement, the English and Welsh bishops asked Catholics to quiz candidates on how they would uphold “the innate dignity of every human being, defending both the child in the womb, the good of the mother and an understanding of the immeasurable good of a child not yet born.”

The Scottish bishops said Catholics “should urge candidates to recognize human life from the moment of conception until natural death and to legislate for its protection at every stage, including protecting the unborn child, ensuring that both mother and child are accepted and loved.”

“We should remind our politicians that abortion, assisted suicide and euthanasia are, as the church has consistently taught, always morally unacceptable,” they said. “Decriminalization of abortion unhappily paves the way toward a legal basis for abortion on demand, for any reason, up to birth, and politicians should be urged to resist it.”

The English and Welsh bishops also asked Catholics to find out how candidates stood on the legalization of assisted suicide and euthanasia and how they would respond to the needs of people “who are frequently neglected or discarded by society such as people with disabilities, Travelers, older people, those who are homeless, those in prison and those trapped in modern slavery.”

They sought assurances over the treatment of migrants, refugees and the poor, and said marriage, freedom of conscience, Catholic schools and the environment should be protected and cherished.

Many of their themes were shared by the Scottish bishops, who included the additional plea to scrap the U.K.’s nuclear arsenal.

At a Nov. 29 news conference in London, Archbishop John Wilson of Southwark said the bishops would not engage in party politics or discussion of individual politicians but were concerned solely with policies.

He did, however, express concerns about possible anti-Semitism within the Labour Party under Jeremy Corbyn, its hard-left leader.

Corbyn has been accused by Jews of not only failing to tackle endemic anti-Semitism, with 130 complaints not investigated, but also of showing personal sympathy for Islamists who have attacked Jewish and Israeli targets.

Ten Jewish members of Parliament have quit the party as a result and Ephraim Mirvis, Britain’s chief rabbi, said in a Nov. 25 article for the Times newspaper that the majority of Jews are “gripped by anxiety” at the prospect of a Labour victory.

Archbishop Wilson told the news conference the bishops were worried by the rabbi’s claims of Jews “frightened and scared in our countries today,” adding: “That, for us, is a real concern.”

The general election is the third in four years for the British public and was called after Prime Minister Boris Johnson failed to win support for a bill to deliver Brexit and take the U.K. out of the European Union following the referendum of 2016.

PREVIOUS: Evangelizers are like angels, bringing good news to the world, pope says

NEXT: Mideast Catholic leaders call for peace, stability in region