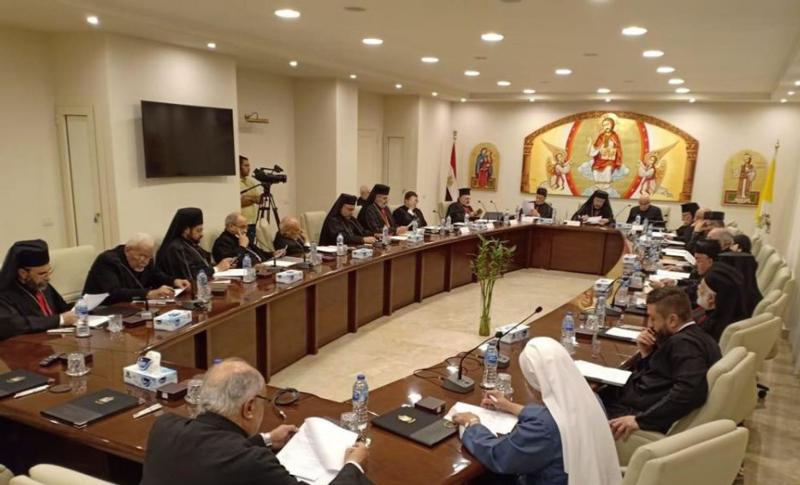 Patriarchs and others attend a meeting in Cairo Nov. 25-29, 2019. The Council of Catholic Patriarchs of the East called upon officials of their homelands to “ensure safety, peace and tranquility and stability for their citizens.” (CNS photo/Syriac Catholic Patriarchate)

CAIRO (CNS) — Amid deadly protests in Iraq, a people’s uprising in Lebanon and continued suffering in Syria, Catholic leaders of the Middle East called upon officials of their homelands to “ensure safety, peace and tranquility and stability for their citizens.”

Meeting in Cairo November 25-29, the Council of Catholic Patriarchs of the East addressed political, economic and social difficulties that many countries are suffering as a result of unrest, violence, extremism and terrorism as well as the situation of displaced people and the inevitability of returning to their villages and homes.

Massive demonstrations against the political ruling class have plagued Iraq since Oct. 1 and Lebanon since Oct. 17.

Despite some confrontations with security forces and supporters of established parties, protesters in Lebanon have largely been spared the violent crackdown seen in Iraq. There, about 400 people have died and thousands have been wounded in protests.

In their final statement, the patriarchs called on the political authority in Iraq “to take courageous action to get the country out of this great crisis so that the bloodshed will stop and life will return to normal by building a strong state on sound foundations, in which true democracy, justice and human dignity prevails, combating corruption.” They also called for “revealing who killed and kidnapped peaceful demonstrators” and asked authorities to hand the killers “over to the judiciary.”

The patriarchs appealed to all to work to “uproot the terrorist ideology of the Islamic State.” While acknowledging the “adversity and tribulation” in Iraq, the patriarchs encouraged Iraqi Christians “to take root in their land and preserve the heritage” of their ancestors.

Turning to Lebanon, the patriarchs said they “support the demands of the Lebanese people in general and the youth in particular, in their movement,” expressing their hope that peace and patriotism be maintained.

The Middle Eastern patriarchs urged Lebanon’s political authority to expedite the formation of a new government “whose first task will be to respond with the popular movement to find radical solutions to the current situation, by transcending personal and factional interests and working to achieve the common good, and freeing the national will from all outside interference.” The patriarchs also stressed the need for the return of refugees and displaced persons to their homelands. Lebanon is host to some 1 million Syrian refugees.

While council members said they “are optimistic about the stability achieved in Syria in most of the country,” they expressed their pain regarding human suffering and damage caused by bombings.

The patriarchs called on “all components of the Syrian people to join hands” to rebuild what is destroyed and to promote the economy.

They also called on “global decision-makers to stop interfering” in Syrian affairs and to help “all the good Syrians to work hard to recover Syria from its long-standing ordeal.”

The council expressed “full support for the Palestinian people tormented by the occupation.”

“We reiterate our call on the international community to recognize the Palestinian state, with Jerusalem as its capital, within the framework of the two states, and the return of Palestinian refugees to their homes,” the patriarchs said.

As for Egypt, the Catholic leaders commended the Egyptian state’s achievements “that have contributed effectively to improving the situation of Egyptians” at all levels, including “practical steps” in consolidating the foundations of citizenship and society.

During the meeting, the patriarchs met with Egyptian President Abdel Fattah el-Sissi and urged him to work toward reconciliation and dialogue in the countries of the Middle East, especially in Lebanon, Iraq and Syria.

NEXT: Defend dignity of persons with disabilities, pope says