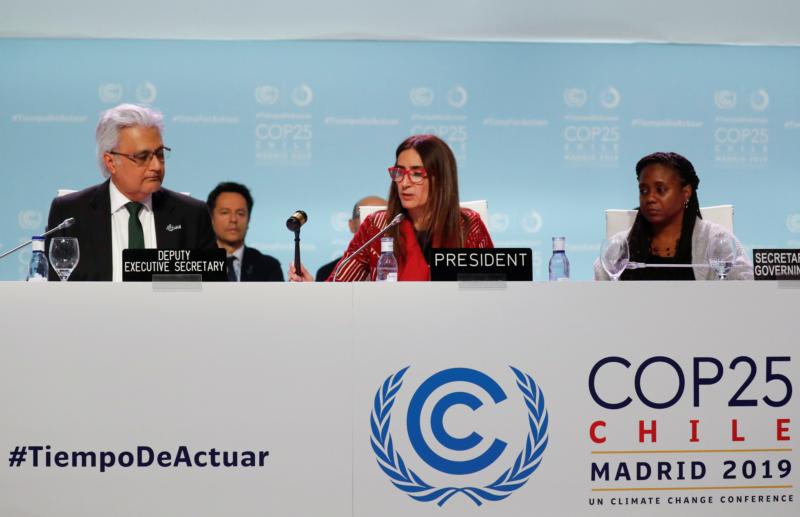 UPDATED – OXFORD, England (CNS) — Catholic campaigners voiced frustration over a lack of progress at U.N. climate talks in Spain, but vowed to step up demands for firmer international action.

“It’s disappointing there’s still a huge gap between what people on the streets are demanding and how governments are acting,” said Chiara Martinelli, senior adviser to CIDSE, a network of 17 Catholic development agencies in Europe and North America.

“We all arrived here with such hope and energy, encouraged by the great youth mobilization in recent months, but found everyone was just negotiating for their own interests. It’s not encouraging to see the obstacles presented by big players such as the U.S., China, Australia and Japan.”

Martinelli spoke to Catholic News Service Dec. 16, a day after as the 25th U.N. Climate Change Conference, COP25, ended in Madrid. It called for participating countries to make progress in climate targets but postponed key decisions.

She said Catholic groups had stood alongside the world’s “most vulnerable countries,” and ensured “human rights language” was included in negotiations. However, she added that CIDSE and other organizations would also re-examine their campaigning approach in light of COP25’s failure to secure firmer action.

Martinelli said that, during the conference, Catholic organizations had had to compete with commercial companies and other “very strong players speaking a completely different language,” adding that the “great challenge” for 2020 would be to persuade governments “to listen to the people, not the interest groups.”

“Of course, we can never be sure how much the governments are really hearing us anyway, but things would be much worse if we weren’t here,” she said. “Our work has now re-started to maintain pressure and raise ambitions before the next summit. People in the streets are already mobilized, and we need the institutional church to help push governments into making the right policy choices.”

Neil Thorns, a director of the London-based CAFOD, told CNS Pope Francis’ message to COP25, urging greater political will in line with climate science, had “set the tone for Catholic engagement,” but he said it was “depressing and indefensible” that world leaders had “got lost in technical details.”

“As Catholics, we have to ensure the poorest and most vulnerable are always at the heart of the discussions,” Thorns, CAFOD’s director for advocacy and education, told CNS.

“But while some countries act very positively, seeking alliances for the common good, others behave like saints in the plenaries when setting out their long-term goals, but quickly lose their halos when it comes to concrete action.”

The Vatican’s L’Osservatore Romano said in a Dec. 16 commentary the Madrid talks had failed to reach a “substantial agreement” and “not responded to expectations,” despite encouragement by Pope Francis in an early December message to participants.

In Madrid, where the Catholic Church co-sponsored campaigning around COP 25, Cardinal Lluis Martinez Sistach, retired archbishop of Barcelona, told a Dec. 16 meeting at Comillas Pontifical University that the talks had been a “great disappointment,” the La Vanguardia daily reported.

Speaking at the same meeting, Cardinal Carlos Osoro Sierra of Madrid said failure to protect human life was “an attack on integral ecology,” but added that active participation of Catholics at COP 25 suggested the outcome was “not a time for sadness.”

COP25, attended by 25,000 people from around 200 countries, sought effective strategies for implementing the Paris Agreement on climate change, adopted in December 2015, and was expected to secure stronger pledges to restrict emissions and temperature increases.

A Dec. 15 U.N. statement said 73 countries had committed to an enhanced climate action plan. It said there had been a “groundswell of ambition” for a cleaner economy at regional and local levels. However, throughout the conference, there was disagreement over market rules for trading carbon credits and how to finance adaptation by poorer countries.

Thorns said the Vatican’s 60-member delegation at COP25, headed by Archbishop Bernardito Auza, papal nuncio to Spain, had helped foster a “culture of encounter and solidarity” among different Catholic groups.

He added that CAFOD, CIDSE and other organizations now counted on national bishops’ conferences to “look beyond borders,” especially in countries with well-supported and influential Catholic churches.

“We can’t separate the climate crisis from worldwide poverty and inequality,” he said. “The pope has shown how everything is interconnected — the cry of the earth and cry of the poor have the same causes, and 2020 will be a key year for putting across this message of integral ecology.”

NEXT: Pope lifts secrecy obligation for those reporting sex abuse