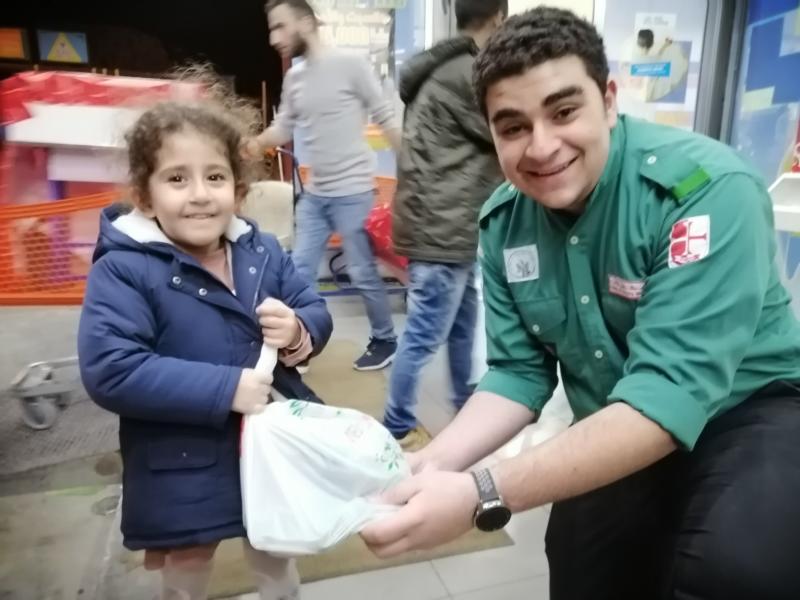 BEIRUT (CNS) — Four-year-old Celine Khater, encouraged by her father, proudly offered the scouts a heavy grocery bag containing rice, pasta and cookies. It was a teachable moment for children to help the needy, replicated outside grocery stores around the world, but in Lebanon, the situation is especially dire.

Since massive anti-government uprisings began two months ago, banks have imposed limits on withdrawals and transfers of money abroad, the value of the Lebanese pound against the dollar has devalued and a reported 160,000 jobs were cut or temporarily suspended. Lebanon has a citizen population of approximately 4 million people, of whom about 40 percent are Christian. Even before the most recent crisis, 30 percent of Lebanese residents lived below the poverty line.

Three people committed suicide in the first two weeks of December as Lebanon continues to descend into its worst financial and economic crisis.

In an effort to brighten an otherwise bleak Christmas, the Maronite Girl Guides and Boy Scouts of St. Joseph Maronite Catholic Parish in Mtaileb, north of Beirut, initiated a food drive for the needy.

“We want to help people feel the joy of Christmas,” Sabine Bou Serhal, 22, a chief for the group, told Catholic News Service. “More and more people are poor.”

The weekend of Dec. 14-15, the Guides and Scouts carried out their project at two supermarkets, greeting customers, asking if they might also purchase some basic food items to help people in need.

“When we decided on this initiative, we worried that people would be reluctant to give. But thank God, people are helping us,” Bou Serhal told CNS.

Donations from individuals and families ranged from a single item to a few grocery bags. One shopper even left the store greeting the scouts with an overflowing grocery cart.

Outside the supermarket, with a package of diapers for his baby boy and one small bag of groceries, Tony Freila quietly placed a six-pack of bottled water in the scouts’ grocery cart.

“Merry Christmas,” he said. The 53-year-old Catholic is unemployed; he lost his managerial position in September. “I like to give in these bad times, even if it’s a small amount. It’s so important to give whatever we can to help others, especially at Christmas.”

With a big smile, Tamar Cholakian, a 33-year-old English teacher at a private school, offered a bag of canned goods.

“This Christmas, because of the crisis, it’s more important than ever to help. Giving, helping, sharing: That’s the true spirit of Christmas,” Cholakian told CNS. “Many people don’t have enough money for food. People are desperate.”

In Cholakian’s profession, teachers are being let go or their salaries are slashed because parents are not able to pay tuition installments, so schools can’t pay the teachers.

“You need to have faith just to wake up in the morning, not knowing what is going to happen,” said Cholakian. “I hope things will be better and soon we will not have to worry about tomorrow.”

Maria Bou Serhal, a 12-year-old Girl Guide, shared with CNS that a lot of her classmates’ parents are losing their jobs.

“It’s sad. We have to keep praying. Only Jesus can help us. We should always pray and be thankful for what we have.”

Maronite Father Nayaf Zainaty, spiritual director for the two youth groups, explained: “This Advent, we’re trying, especially with the youth, to really feel the needs of others. They have the Christian formation, and this is a great way to put it into practice. We’re helping not only Christian families, but Muslims as well. Christmas is not just for Christians. Jesus was born for all people, everywhere.”

St. Joseph’s Parish, with the help of the Guides and Scouts, will host a luncheon Dec. 21 at the church hall for 120 poor people from two Beirut suburbs.

Visiting his homeland from Murcia, Spain, where he owns a Lebanese restaurant, Charlie Rizk accompanied his mother as they bought last-minute items ahead of their trip to Spain.

“I’m 28 years old. This is the first Christmas I feel sad, knowing there are people who are hungry here and can’t celebrate Christmas as before.” Of the ambiance in the supermarket, Rizk observed, “Everyone is looking carefully at the prices.”

Offering bags of groceries, Rizk said, “There are always people to bring hope, like the scouts.”