Venezuelan refugees finding jobs in Brazil, thanks to Catholics 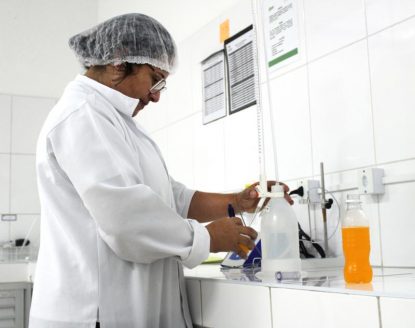 SALVADOR, Brazil (CNS) — Over the past few years, hundreds of thousands of Venezuelans have fled their economically stricken and politically volatile country. Many have crossed over the border into Brazil and Colombia seeking a better life.

“It wasn’t an easy decision. It is like throwing yourself in the ocean and hoping that you can survive by swimming away,” Dellana Maria Rodriguez, 43, told Catholic News Service with tears in her eyes. “I left my friends, my parents.”

Rodriguez, 43, used to live on the Venezuelan border with Brazil. She would come to Brazil to purchase supplies; one day, she decided to stay.

“I had a good job in Venezuela as a quality inspector at a factory, but life was getting too difficult,” she said. “Many people lost their jobs, and the unstable political situation was making me very nervous.”

But crossing the border, many Venezuelans found, was only the first step into settling into the new country. Thousands have huddled into makeshift refugee camps in Pacaraima and Boa Vista, both in Brazil’s northern state of Roraima. With few jobs in these two cities, tension mounts as Brazil’s government, along with nongovernmental organizations and international entities, are trying to settle these refugees in other parts of the country.

“In the last few months we found anguished Venezuelans in the shelters in Boa Vista,” said Fabricio Pellicelli, president-director of AVSI Brasil, part of the Italy-based AVSI Foundation.

“Something that was supposed to be temporary, only two to three months, is becoming more permanent, with people remaining eight, nine months, even a year in these makeshift shelters, with little perspective of improving their lives,” said Pellicelli.

AVSI Brasil, along with a number of other entities linked to the Catholic Church — such as the Scalabrinian institute for migrant human rights, Jesuit Refugee Service, the Catholic ministry to migrants of the Diocese of Roraima, and Caritas Brazil — work to help the Venezuelans inside and outside the camps.

Once over the border, Rodriguez headed to Boa Vista to look for a job and a place to live.

“I said to myself, ‘From now on, I will do anything and everything.’ At the first place I went looking for a job, they needed a seamstress, so I told the woman I was a seamstress,” she said with a wry smile.

“I never said no to work, no matter what it was,” she said, adding that she cleaned houses and ran errands to get by.

After a year doing odd jobs in Boa Vista, Rodriguez and seven other Venezuelans were chosen by executives of Goob Beverages to work in its factories in Alagoinhas, an hour-and-a-half from Bahia’s capital, Salvador.

“I told them I was a quality inspector back home, but had no way to prove it,” she said. “They believed me and took a chance on me anyway.”

“Brazil is a country that opened its arms and welcomed me and for that, I will be forever grateful,” said Rodriguez.

Her story is very similar to others heard by CNS: Venezuelans crossed the border with very few belongings, leaving behind their old lives and their jobs.

The increasing discontentment in the shelters run by AVSI in Pacaraima and Boa Vista led the organization to seek the help of private companies to employ these refugees and move them to other parts of the country.

“During a casual dinner engagement with a friend who works in a beverage company here in Bahia, I mentioned the problem, and he felt so moved he talked to his boss. The boss, a Peruvian immigrant himself, embraced the idea, and we three went to Boa Vista to interview the refugees,” said Pellicelli.

Goob Beverages has five distribution centers in Bahia, producing over 14 million liters of nonalcoholic beverages per month. It is one of the largest beverage manufacturers in Brazil’s Northeast.

After the first day of interviews, however, Eduardo Barrantes, general manager at Goob beverages, and the company’s CEO in Brazil, Jorge Hans Ananos Alcazar, noticed a big problem and concluded that they had to revise their idea of normal interviews.

“These people had no resumes, no way for us to verify their schooling or their experience. They came to Brazil with very few belongings. So, we had to trust our guts and rely on our instincts to see who would best fit into the available positions,” Barrantes said.

The lack of documents and diplomas is a recurring problem for those coming across the border.

“Some of these refugees are highly skilled, but have no way to prove it, and that is a big obstacle when searching for employment,” said Pellicelli.

Some of the Venezuelans hired by Goob, like Jesus Aldemir Medero and John Alexandre Perez, had jobs specifically created for them, said Barrantes.

“They had dramatic life stories, which we believed. We believed they would be an asset to our company,” said the manager.

“What we needed was a chance, a job. And we got that. Go back to Venezuela why? To what?” said Medero when asked if he would go back to his home country anytime soon.

While Goob provided employment for the workers, AVSI Brasil provided three months of rent for these eight workers and their families, along with help in finding schools for their children, obtaining documents and opening bank accounts.

After more than a year, all eight Venezuelan employees have thrived at the company, with all being promoted at least once during the past year and settling into their new lives.

This first project was so successful that AVSI announced earlier this year it had partnered with the Scalabrinian Sisters in Brazil and the U.S. State Department’s Bureau of Population, Refugees and Migration. The project calls for a total U.S. investment of $3.1 million during a two-year period in which 500 Venezuelan families will be relocated and integrated into the Brazilian labor force.

“With the investment by the U.S. we not want only to shelter these refugees, but to integrate them into Brazilian society through employment,” said Pellicelli

“The Venezuelan migration can be an opportunity for Brazil as well as the Venezuelans,” he added.

“These are fathers and mothers who once traveled around the world as businesspeople and now have no food to put on their family’s table. They have skills that can help Brazil grow,” he said.

NEXT: Iraqi patriarch appeals for aid to Christians in Ninevah Plain