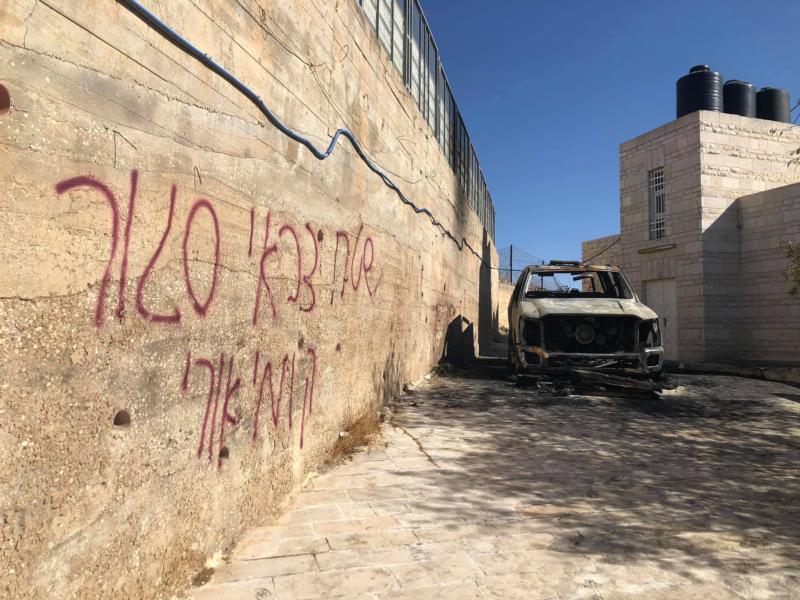 Graffiti is seen in Hebrew on a wall next to a car was burned in the Palestinian town of Taybeh, east of Ramallah, West Bank. The Assembly of Catholic Ordinaries of the Holy Land condemned vandalism attacks in two Arab villages and called on Israeli authorities to “investigate seriously” what they termed hate crimes. (CNS photo/Taybeh Municipality)

JERUSALEM (CNS) — The Assembly of Catholic Ordinaries of the Holy Land condemned vandalism attacks in two Arab villages and called on Israeli authorities to “investigate seriously” what they termed hate crimes.

In addition to dozens of cars damaged and anti-Arab Hebrew graffiti spray painted on walls in the Arab town of Jaljulia in central Israel, graffiti was scrawled in Hebrew on a wall and a car was burned in the Palestinian town of Taybeh, east of Ramallah.

“These two incidents follow many other similar incidents which have been committed recently, especially against Palestinian properties in the West Bank. We strongly condemn these racist acts of vandalism and urge the Israeli authorities to investigate seriously these apparent hate crimes and to bring those responsible for these crimes and those who incite for such crimes to justice as soon as possible,” the Assembly said in a Nov. 29 statement. The assembly includes bishops, patriarchs and others with jurisdiction over territory in the Holy Land.

Father Johnny Abu Khalil of Holy Redeemer Parish said the attack in Taybeh, north of Jerusalem, took place in the early morning of Nov. 29, when the car belonging to a young family from his parish was set afire. The car was parked in the private parking area of the family’s home at the edge of town. Some young men from the parish who were out driving noticed the flames and alerted the authorities, he said.

“Usually Taybeh is a very quiet and peaceful village. It was very scary. The car was very close to the house, and just a bit more and the house could have caught on fire, too,” Father Abu Khalil told CNS in a phone conversation Dec. 1. He said he went to meet with the family early Nov. 29. “They are still a bit anxious and worried it could happen again.”

The graffiti on the inner wall of the parking area proclaimed the area a “closed military zone,” a term used by the Israeli Defense Forces in areas to prevent Palestinians from entering.

Though representatives of the Israeli army came to the village to investigate, the priest said he is doubtful any perpetrators will be arrested as there are many incidents of vandalism believed to be carried out by a group of extremist young settlers known as the “hilltop youth,” who seem to be acting outside of the norms of most settlers.

“The soldiers said they couldn’t do anything against them and that they come against (the soldiers) too,” said Father Abu Khalil.

However, he said, there had been a more disturbing incident a few weeks earlier when several French nuns who have established a convent in Taybeh went for a walk a bit away from the village toward Jericho. They were verbally accosted by a group of settlers, one of whom undressed in front of them in order to humiliate the nuns.

“There are fanatic extremist settlers near Taybeh. The nuns didn’t even tell us where they were going; they thought they could walk around like in France,” said Father Abu Khalil. “They went back to Paris after that, and now they are back but they are afraid to go anywhere outside the village.”

At Mass Dec. 1, Father Abu Khalil reminded his parishioners that they are all waiting for the king of peace and they should maintain hope that peace and justice will reign over all the Holy Land.

“Christmas is coming and every year we pray for this peace and justice and a reconciliation of hearts that every person can see the image of God in the other,” he said.

NEXT: From abuse to ‘nones,’ U.S. bishops share concerns with pope