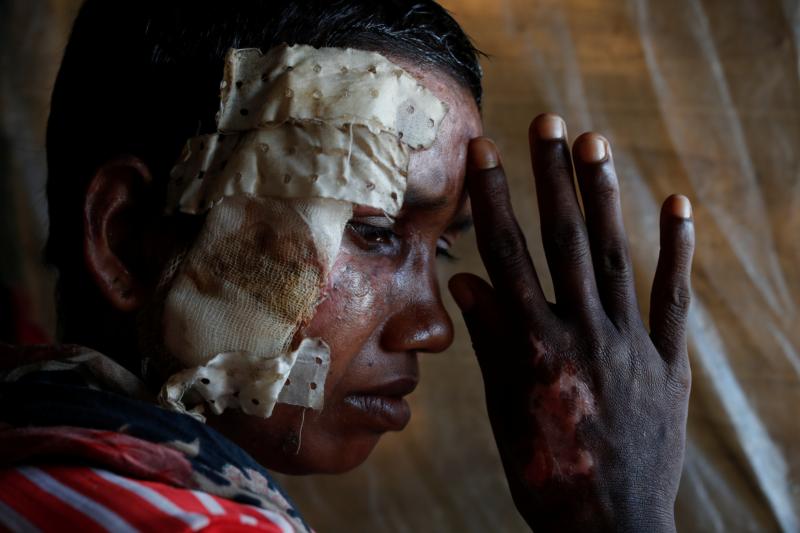 A Rohingya woman who says she was beaten and burned by soldiers in Myanmar poses for a photograph in 2017. Cardinal Charles Bo of Yangon, Myanmar, has appealed to the international community not to punish the people of Myanmar as the country faces genocide charges over the military’s 2017 crackdown on Rohingya. (CNS photo/Jorge Silva, Reuters)

YANGON, Myanmar (CNS) — Cardinal Charles Bo of Yangon has appealed to the international community not to punish the people of Myanmar as it faces genocide charges over the military’s 2017 crackdown on Rohingya.

Ucanews.org reported the cardinal urged the world to keep in mind the well-being of all the people of Myanmar as it considers what measures to take in pursuit of justice.

“In particular, I urge the international community that in their efforts to hold those responsible for crimes against humanity accountable, they do not inadvertently penalize those who are not responsible, and do not punish the people of Myanmar as a whole, who in the past seven years have seen their country take tentative, fragile steps toward opening up to the world,” Cardinal Bo said in a letter released Dec.1.

The cardinal raised his concern that the efforts of the international community could hurt the poorest in the Southeast Asian nation, which is in a fragile state after decades of military rule.

“I encourage the international community to focus their efforts in a targeted way on those directly responsible for perpetrating grave violations of human rights and gross injustices,” said Cardinal Bo, who is also president of the Federation of Asian Bishops’ Conferences.

Gambia named several leading figures, including de facto prime minister Aung San Suu Kyi, in a case filed at the International Court of Justice. Suu Kyi has vowed to attend and defend herself during the Dec. 10-12 public hearing.

A U.N. fact-finding mission found last year that the military had committed four of the five acts constituting genocide against Rohingya and called for Gen. Min Aung Hlaing and five other generals to be prosecuted for genocide and crimes against humanity.

More than 740,000 Rohingya were forced to flee Myanmar’s Rakhine state to neighboring Bangladesh after a military clampdown in August 2017; they had been subjected to violence that U.N. investigators say amounted to genocide.

Myanmar’s government and military have vehemently dismissed accusations of ethnic cleansing or genocide.

Cardinal Bo, the nation’s first cardinal, is a staunch campaigner for reconciliation in Myanmar, where peace remains elusive as fighting still rages in ethnic areas such as Rakhine and Shan states and the Rohingya crisis is unresolved.

He said he will not comment on the international legal initiatives as he is neither a lawyer nor a politician.

The cardinal acknowledged his country needs a helping hand from the world to find truth and reconciliation, as it is in a transition to democracy after emerging from decades of military rule.

He has urged the world to understand Myanmar’s delicate situation and continue to help its transition to a federal democratic union.

“I earnestly request all our friends to recognize this reality and help the people of Myanmar in resolving their problems,” Cardinal Bo said in a letter in September 2018.

“Extreme terms like genocide, ethnic cleansing and sanctions will not assist us in our journey toward peace and democracy.”