Catholic-Orthodox efforts at unity must be local, too, pope says 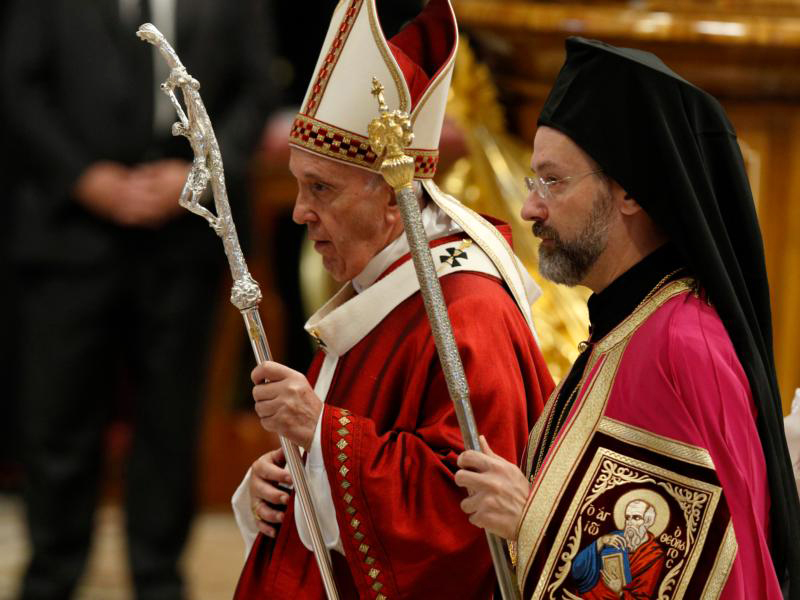 Pope Francis walks with Orthodox Archbishop Job of Telmessos as they leave Mass marking the feast of Sts. Peter and Paul in St. Peter’s Basilica at the Vatican June 29, 2019. Archbishop Job was representing the Ecumenical Patriarchate of Constantinople. (CNS photo/Paul Haring)

VATICAN CITY (CNS) — The high-level commitments of the Catholic and Orthodox churches to praying and working together for the common good should be echoed on the diocesan and parish level wherever Catholics and Orthodox live side by side, Pope Francis said.

In a letter to Ecumenical Patriarch Bartholomew of Constantinople, the pope called for the strengthening on the local level of “the daily dialogue of love and life in shared spiritual, pastoral, cultural and charitable projects.”

The pope’s letter was delivered personally to the patriarch by Cardinal Kurt Koch, president of the Pontifical Council for Promoting Christian Unity, during the celebration Nov. 30 of the feast of St. Andrew, the patriarchate’s patron saint.

“Through the delegation,” Pope Francis wrote to Patriarch Bartholomew, “I convey the assurance of the unwavering intention of the Catholic Church, as well as my own, to continue in our commitment to working toward the re-establishment of full communion among the Christians of the East and the West.”

When St. John Paul II visited the patriarchate 40 years ago, the pope said, he declared that “the question we should ask ourselves is not whether we can re-establish full communion, but rather whether we have the right to remain separated.”

Pope Francis told the patriarch, “This question, which is only seemingly rhetorical, continues to challenge our churches and demands that all the faithful respond with a renewal of both attitude and conduct.”

While the formal theological dialogue is essential for helping the churches identify their common faith and seek consensus on issues of apparent difference, Pope Francis said there also are other channels toward unity to which all Catholics and Orthodox must contribute.

“Our relations are nourished above all through authentic gestures of mutual respect and esteem” that flow from the charity to which all Christians are called, he said.

And, as Christians who share one baptism, he said, “our closeness grows and intensifies each time that we pray for one another and pray together as brothers.”

“Finally,” he said, “our relationship is seen to be mature when, obedient to the risen Christ’s mandate to take the Gospel to all creatures and to heal the sick, Catholics and Orthodox work together in proclaiming the Good News and in serving the needy.”

NEXT: Evangelizers are like angels, bringing good news to the world, pope says