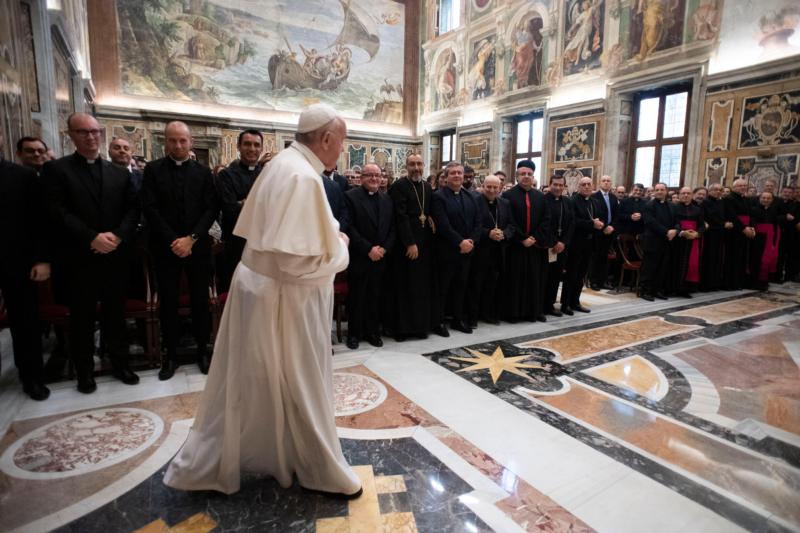 Pope Francis leads an audience with people taking part in a course on marriage sponsored by the Roman Rota, at the Vatican Nov. 30, 2019. The Roman Rota is a Vatican tribunal that mainly handles marriage cases. (CNS photo/Vatican Media)

VATICAN CITY (CNS) — The sacrament of marriage cannot be “improvised,” but must be prepared for, nourished and supported throughout the couple’s journey, Pope Francis said.

Christian couples also must be helped to pursue their “particular vocation to become missionary disciples as spouses, witnesses of the Gospel in family life, at work, in society, wherever the Lord calls them,” he said. And they must be given the space in parish ministries to fulfill that call.

The pope made his remarks Nov. 30, in a meeting with men and women enrolled in a course offered by the Roman Rota, the Vatican tribunal primarily responsible for hearing requests for marriage annulments. The course, held Nov. 26-30, was on safeguarding marriage and on the pastoral care of “wounded couples.”

“The church will never be able to go on its way, turning its head away” from those couples facing crisis, he said.

“The church, when it encounters the reality of wounded couples, first of all cries and suffers with them,” the pope said. “It draws near to them with the oil of consolation to sooth and to heal. It wants to take upon itself all the pain it encounters.”

Helping those couples and dealing with their marriage cases can never be a merely impersonal and “bureaucratic” process, the pope said; rather, it involves “entering into” their lived experience and offering compassion.

The church’s canonical and juridical processes are part of its mission “always and only to seek the good of those who are wounded, seek the truth of their love,” he said.

The church has no other intention than “to support their just and desired happiness, which, before it being a personal good to which we all humanly aspire, is a gift that God sets aside for his children and that comes from him,” the pope said.

The church, he said, must prepare and support couples so that marriage be “that which the Lord Jesus wanted it to be,” a vocation and sacrament that fills both spouses with joy and with spiritual and human fulfilment.

Married couples are the “columns” of the domestic church, he said, and they are instrumental in the church’s missionary mandate.

Marriage, he said, is a couple’s vocation, calling them to “demonstrate the beauty of their belonging to him” and to show others how faith adds to their love, which in turn can be “the epiphany in the world of Christian hope offered by Christ.”

NEXT: Catholic-Orthodox efforts at unity must be local, too, pope says