Pope blesses statues of baby Jesus, ‘face of the neediest’ 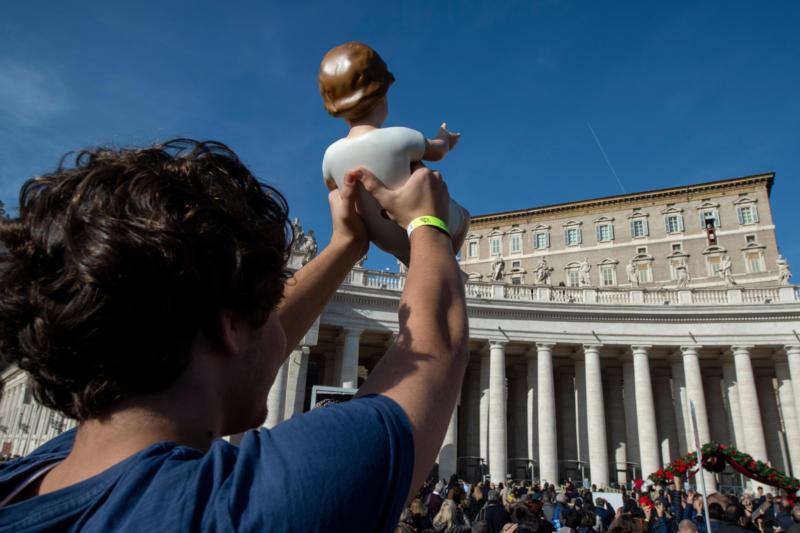 A pilgrim holds up a figurine of the Christ Child as Pope Francis leads the Angelus from the window of his studio overlooking St. Peter's Square at the Vatican Dec 15, 2019. (CNS photo/Vatican Media)

VATICAN CITY (CNS) — Pope Francis blessed hundreds of figurines of the baby Jesus — ranging from tiny plastic figures to life-sized statues — and encouraged children to make sure they have Nativity scenes at home.

After reciting the Angelus prayer Dec. 15, the third Sunday of Advent, Pope Francis did the traditional blessing of the “bambinelli,” or statues of the infant Jesus, for children to put in mangers at home, at school and in their parishes.

“Raise the statues up,” the pope told the children. “I bless them from my heart.”

Pope Francis then quoted from his new apostolic letter on the meaning and importance of the creche: “The Nativity scene is like a living Gospel. … As we contemplate the Christmas story, we are invited to set out on a spiritual journey, drawn by the humility of the God who became man in order to encounter every man and woman. We come to realize that so great is his love for us that he became one of us, so that we in turn might become one with him.”

In his main Angelus address, Pope Francis spoke about the importance of answering the Advent call to conversion in preparation for Christmas.

“We are called to recognize the face God chose to assume in Jesus Christ, humble and merciful,” he said.

“Advent is a time of grace,” the pope said. “It tells us it’s not enough to believe in God; it’s necessary to purify our faith each day.”

The Advent journey is about preparing “to welcome not a character from a fable, but the God who calls us, gets us involved and who makes us choose,” he said. “The Baby lying in the manger has the face of our neediest brothers and sisters,” who deserve the care of the Christian community.

Nativity scenes were also on the pope’s mind Dec. 16 when he met members of Italy’s Catholic Action section for 11- to 13-year-olds for his annual exchange of Christmas greetings with them.

“I’m giving you some homework,” he told them. “On Christmas Day pause in prayer and, with the same awe of the shepherds, look upon baby Jesus who came into the world to bring the love of God, who makes all things new.

“With his birth Jesus became a bridge between God and humanity, reconciling earth and heaven, restoring the unity of the whole human race,” the pope said. “And today he asks you, too, to be little bridges where you live. You know there always is a need to build bridges, right?”

“What is better, building bridges or walls?” he asked them. “Bridges,” they shouted.

Being bridges, bringing people together, “is not always easy,” the pope told them, “but if we are united to Jesus, we can do it.”

Pope Francis also asked them to think about what “Christmas” means to Mary. “She and Joseph can teach us how to truly welcome Jesus, how to adore him and how to follow him day by day.” 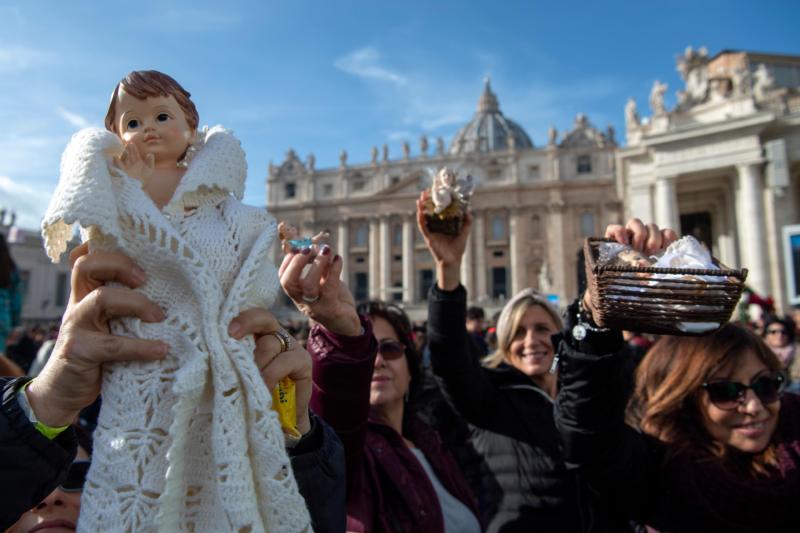 Pilgrims hold up figurines of the Christ Child as Pope Francis leads the Angelus from the window of his studio overlooking St. Peter’s Square at the Vatican Dec 15, 2019. (CNS photo/Vatican Media)