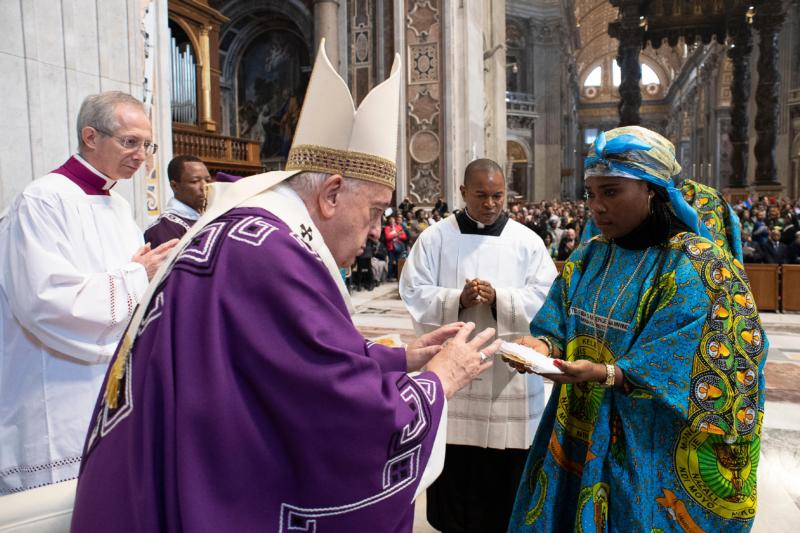 Pope Francis accepts offertory gifts as he celebrates a Mass for the Congolese Catholic community in Rome in St. Peter’s Basilica at the Vatican Dec. 1, 2019. The Mass included elements of Congolese culture. (CNS photo/Vatican Media)

VATICAN CITY (CNS) — The sounds of ululations and drums and a litany of saints filled St. Peter’s Basilica Dec. 1 as Pope Francis celebrated Mass according to what is commonly called the Zairean Rite.

Marking the 25th anniversary of the Congolese Catholic community in Rome, the liturgy combined some prayers in Italian with those from the “Roman Missal for the Dioceses of Zaire,” the former name of Congo.

The missal, which incorporates elements of Congolese culture, received formal approval from the Vatican in 1988 after a long process of inculturation encouraged by the country’s bishops, St. Paul VI and St. John Paul II.

In addition to Congolese music and rhythmic dance, the liturgy gives an important space to the litany of saints and of faith-filled ancestors, and the penitential rite and the exchange of peace take place together after the homily and before the offertory.

At the end of the liturgy, Sister Rita Mboshu Kongo, a theologian and member of the Daughters of Mary Most Holy, asked Pope Francis to visit her war-torn country and to keep pressuring the international community to intervene.

“Some of us here do not know where our relatives are or whether they are alive or dead,” she said. “With this war, our mothers are humiliated in every way, raped in the presence of their husbands and children before being murdered and eviscerated like beasts.”

“We want peace,” she said. “Nothing but peace.”

She also thanked Pope Francis for agreeing to celebrate the Mass with the Congolese. To general laughter, she shared publicly that he had specified the liturgy would not be “a long Mass of four hours like you do.” Instead, it was about 90 minutes.

In his homily for the first Sunday of Advent, Pope Francis told the Congolese that the promise of Jesus’ coming is “the root of our hope, the certainty that amid the tribulations of the world God’s consolation will be given to us, a consolation that is not just made up of words, but of presence: the presence of him who comes among us.”

Leaving their homelands and loved ones, the Congolese migrants and refugees sometimes found a warm welcome in Rome and sometimes found more difficulty, he said. “But for God, you are always honored guests. For him, we are never foreigners, but long-desired sons and daughters. And the church is God’s house, so you should always feel at home here.”

The Advent readings, he said, urge Catholics to be awake, watchful and on guard against temptation, including the temptation to think the meaning of life is to accumulate things, money and power.

“It’s up to us to unmask the deceit that those who have many things are the happy ones, to resist the dazzling lights of consumerism that shine everywhere this month,” he said. Instead, Christians must “believe that prayer and charity are never a waste of time but are our greatest treasure.”

NEXT: Pope saddened by deadly protests in Iraq