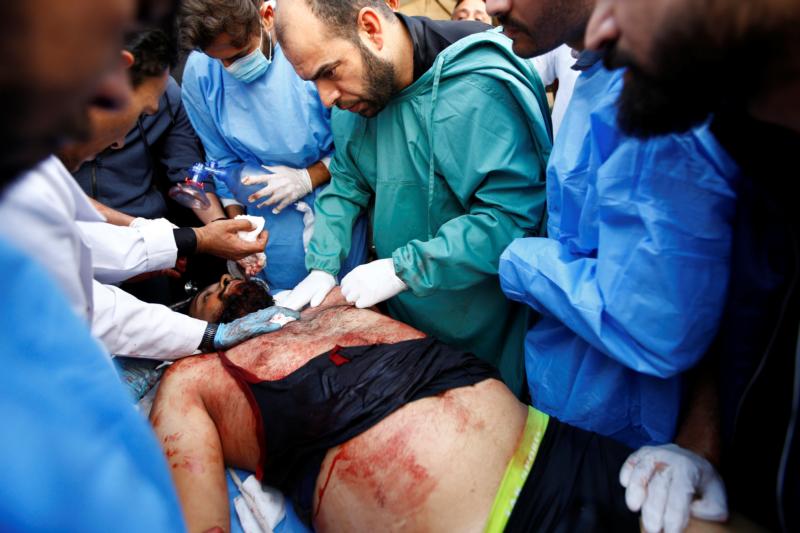 Medical crew attempt to resuscitate a demonstrator during ongoing anti-government protests in Baghdad Nov. 29, 2019. Pope Francis said after the Angelus Dec. 1 he was concerned and saddened following two months of protests in Iraq that resulted in the deaths of hundreds of people. (CNS photo/Alaa al-Marjani, Reuters)

VATICAN CITY (CNS) — Pope Francis said he was concerned and saddened following two months of protests in Iraq that resulted in the deaths of hundreds of people.

“I pray for the dead and the wounded; I am close to their families and to the entire people of Iraq, calling upon God for peace and harmony,” the pope said Dec. 1 after praying the Angelus prayer with pilgrims gathered in St. Peter’s Square.

The pope’s remarks came nearly four days after Iraqi security forces fired on unarmed protesters, leading to the deaths of 25 people and the wounding of dozens more, according to Amnesty International.

Since the protests began Oct. 1, an estimated 400 demonstrators have been killed. Protesters have expressed anger at government authorities for widespread financial mismanagement, corruption and increasing poverty in the country.

The protests resulted in the resignation of Iraqi Prime Minister Adil Abdul-Mahdi Dec. 1 and for calls by international observers for investigations into the killing of protesters.

Iraqi Cardinal Louis Sako, Chaldean Catholic patriarch, expressed his “solidarity with Iraqi Shias and Sunnis” and his concern for those who died or were wounded in the protests, said a statement on the patriarchate’s website. He asked all Catholics to pray for the country at Masses Dec. 1.

Cardinal Sako, in the statement posted Nov. 30, said he hoped that “the blood that has been shed as a price” for a free, dignified and secure life in Iraq, will be the seeds of an effort “to build a homeland of justice and independence, in which no one would be oppressed or treated unfairly.”