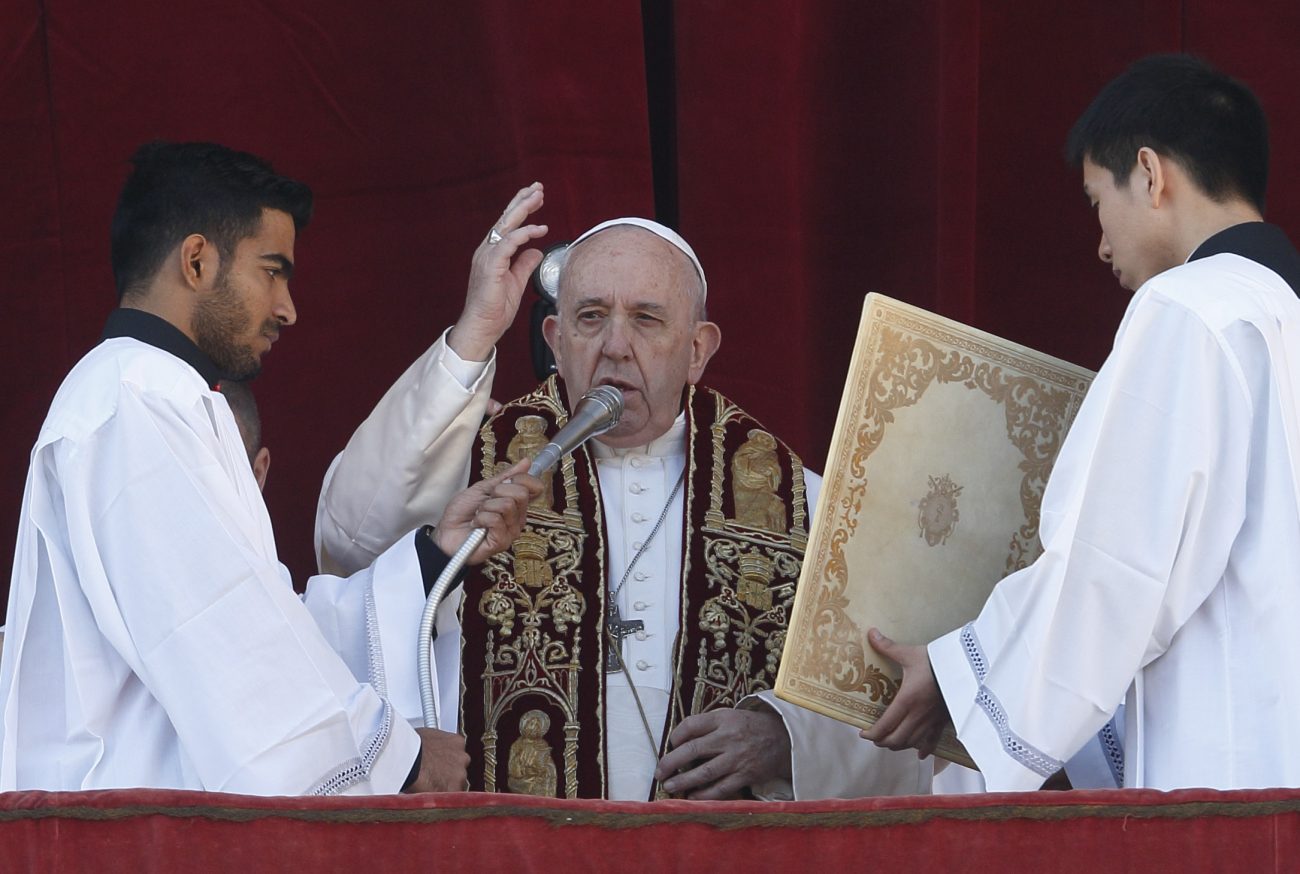 Pope Francis delivers his Christmas blessing “urbi et orbi” (to the city and the world) from the central balcony of St. Peter’s Basilica at the Vatican Dec. 25, 2019. (CNS photo/Paul Haring)

VATICAN CITY (CNS) — The light of peace, hope and salvation brought into the world with the birth of Jesus is stronger than the darkness of war and despair, but spreading that light requires the cooperation of every person of good will, Pope Francis said in his Christmas address.

From the central balcony of St. Peter’s Basilica on a brilliantly sunny and warm Dec. 25, the pope prayed that Emmanuel, God with us, would bring light “to all the suffering members of our human family.”

“May he soften our often stony and self-centered hearts and make them channels of his love,” the pope said before giving his Christmas blessing “urbi et orbi” (to the city and the world).

According to the Vatican police, there were about 55,000 people gathered in St. Peter’s Square for the blessing.

Pope Francis prayed that Jesus would “bring his smile, through our poor faces, to all the children of the world: to those who are abandoned and those who suffer violence.

“Through our frail hands, may he clothe those who have nothing to wear, give bread to the hungry and heal the sick,” he continued. “Through our friendship, such as it is, may he draw close to the elderly and the lonely, to migrants and the marginalized.”

“On this joyful Christmas Day, may he bring his tenderness to all and brighten the darkness of this world,” the pope prayed. 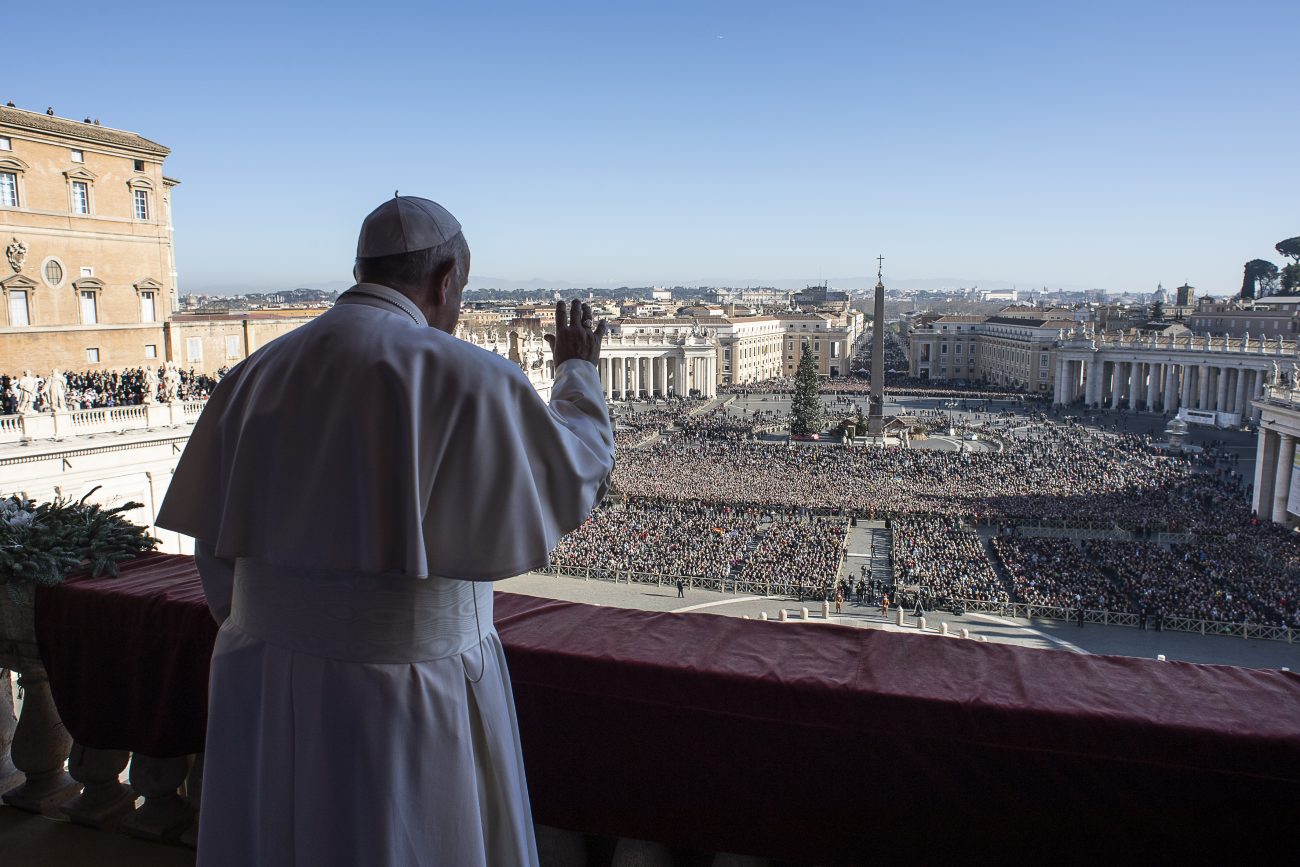 Pope Francis greets the crowd as he leads his Christmas message and blessing “urbi et orbi” (to the city and the world) from the central balcony of St. Peter’s Basilica at the Vatican Dec. 25, 2019. (CNS photo/Vatican Media)

A few hours before the pope’s midday speech and prayer, the Vatican released a message sent to the warring leaders of South Sudan by Pope Francis, Anglican Archbishop Justin Welby of Canterbury and Presbyterian Rev. John Chalmers.

The three have been praying for an end to the South Sudanese conflict, hosted a retreat for the opposing political leaders at the Vatican in April and have promised to visit the country together if the leaders fulfill their promise to form a transitional government by Feb. 20.

In their message, the three religious leaders said, “We wish to extend to you and to all the people of South Sudan our best wishes for your peace and prosperity, and to assure you of our spiritual closeness as you strive for a swift implementation of the peace agreements.

“We raise our prayers to Christ the savior for a renewed commitment to the path of reconciliation and fraternity,” they said. “May the Lord Jesus, prince of peace, enlighten you and guide your steps in the way of goodness and truth, and bring to fulfilment our desire to visit your beloved country.”

In his formal Christmas address, Pope Francis spoke about other areas of the world where Christ’s peace is needed — Syria, Iraq, Congo, Ukraine, the Holy Land — and about specific situations of poverty and oppression that require urgent action.

Pope Francis was joined on the balcony by Cardinal Renato Martino, the retired president of the former Pontifical Council for Justice and Peace, and by Cardinal Konrad Krajewski, the papal almoner, who distributes charity on behalf of the pope and is the main force behind the Vatican’s practical services like showers, medical clinics and shelters for the poor.

Cardinal Krajewski, along with leaders of the Rome-based Community of Sant’Egidio, also have been spearheading an effort to bring to Italy vulnerable migrants and refugees stuck in camps in Greece, Lebanon and other countries on the Mediterranean Sea.

Pope Francis prayed that “the Son of God, come down to earth from heaven,” would protect and sustain all those who because of war, poverty and injustice “are forced to emigrate in the hope of a secure life.”

And, he said, “it is injustice that turns them away from places where they might have hope for a dignified life, but instead find themselves before walls of indifference.”

Pope Francis also prayed that Jesus, “the tiny Babe of Bethlehem,” would “bring hope to the whole American continent, where a number of nations are experiencing a time of social and political upheaval,” especially in Venezuela.

Pope Francis also prayed that the newborn Jesus would bring “comfort to those who are persecuted for their religious faith, especially missionaries and members of the faithful who have been kidnapped.”

PREVIOUS: Christmas says, ‘You are loved,’ pope says in homily

NEXT: Pope, at Angelus, prays for Philippine victims of typhoon