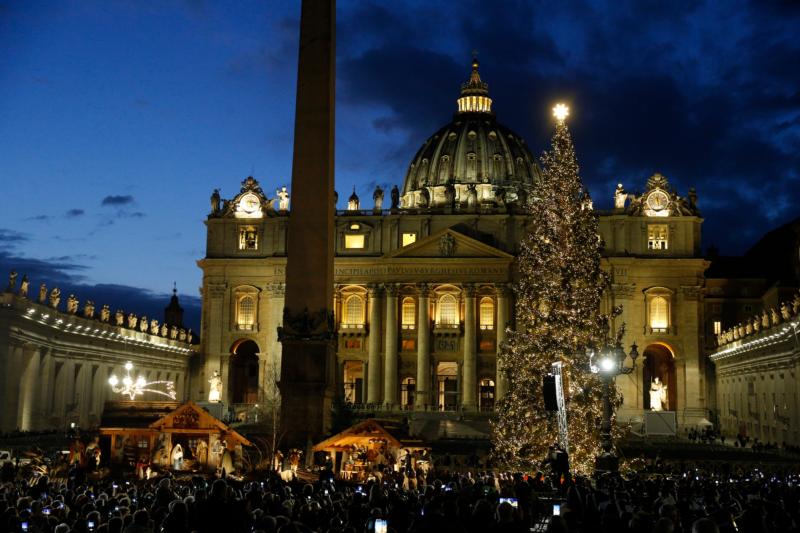 The Christmas tree sparkles after a lighting ceremony in St. Peter’s Square at the Vatican Dec. 5, 2019. (CNS photo/Paul Haring)

The 85-foot-tall spruce tree came from the forests of the Veneto region in northeast Italy and another 20 smaller trees were donated by communities in the region’s province of Vicenza.

It was adorned with silver and gold balls and “next generation” lights meant to have a reduced impact on the environment and use less energy.

The large Nativity scene in St. Peter’s Square was made entirely out of wood and replicates traditional northern Trentino-style buildings.

Some 23 life-size wooden figures — all with handcarved heads — fill the scene, representing life in a small rural village in the northern Province of Trento in the early 1900s. There is a lumberjack pulling wood with a sled and people making cheese and washing clothes. Some of the faces reproduce the faces of real Italian shepherds from the region, including a man who recently died in an accident. Some of the clothes are real outfits handed down through the generations or once worn by local shepherds.

The scene also features broken tree trunks and limbs salvaged from severe storms in the region in late 2018. About 40 trees will be replanted in the area that had been seriously damaged by hurricane-like winds and torrential rains.

A smaller Nativity scene, provided by the northern province of Treviso, was set up in the Vatican’s Paul VI audience hall; with its Gothic arches, it imitates an old style of barns and stables in the Lessinia mountains of the Veneto region.

Early in the day, Pope Francis met with delegations from the northern Italian regions responsible for the tree and Nativity scene.

Thanking the delegations for their gifts, the pope said he was happy to hear that new trees will be planted in the region to help reforest areas hit by last year’s storms.

“These alarming events are warning signs that creation sends us and that ask us to immediately make effective decisions to safeguard our common home,” he said.

The Christmas tree they donated represents “a sign of hope, especially for your forests, that they may be cleared (of debris) as soon as possible in order to begin the work of reforestation,” he said.

The pope reminded his audience of his recent letter on the meaning and importance of setting up Christmas cribs.

“It is a genuine way to transmit the Gospel in a world that sometimes seems to be afraid to remember what Christmas really is and erases Christian signs in order to keep only those of a trivial, commercial” nature, he said.

Pope Francis also asked people to pray for help in seeing Jesus in the face of those who suffer and in lending a hand to those in need.