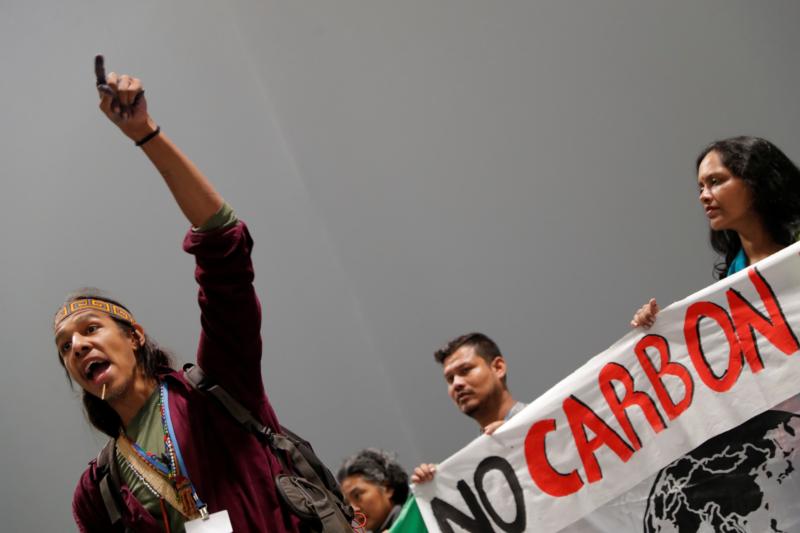 An activist gestures during a protest at the venue of the United Nations climate conference (COP25) in Madrid Dec. 5, 2019. Catholic campaigners at the conference welcome support from Pope Francis and church leaders, vowing to ensure “firm moral perspective” in the intergovernmental negotiations. (CNS photo/Susana Vera, Reuters)

Chiara Martinelli, a senior adviser to CIDSE, a network of 17 Catholic development agencies in Europe and North America, noted the importance of Catholic organizations at the talks, since more and more private sector and commercial companies attend.

“Our task is to maintain a link between what’s happening in the negotiating rooms and outside in parishes and communities across the world, where millions of alternative, sustainable pathways are already being pursued,” said Chiara Martinelli, a senior adviser to CIDSE.

Martinelli spoke at the 25th U.N. Climate Change Conference, COP 25; about 25,000 people from 196 countries attended the conference in Madrid.

The Dec. 2-13 conference will seek effective strategies for implementing the Paris Agreement, a framework of action against climate change adopted by the U.N. in December 2015.

In a statement, the Vatican-based Caritas Internationalis said it was taking a “call for unity, solidarity and justice” to COP25, at a time when the Paris commitment to keep global warming below 1.5 degrees was not being observed, and “robust rules” were needed to “ensure transparent and fair counting of carbon emissions reductions” and better protection of indigenous peoples.

In a Dec. 5 interview with Catholic News Service, Martinelli said Catholic organizations hoped to see details and specifics quickly emerging after the “big words and promises” contained in opening speeches by heads of state.

“We’ve now had 25 U.N. climate conferences, and if governments were truly listening, we wouldn’t need any more,” Martinelli said.

“But the Paris Agreement and other achievements were made possible by allowing the voices of those most impacted by climate change into the talks. Catholic development and social justice organizations like ours are prioritizing these voices, especially from the global south.”

Addressing 50 world leaders at the conference’s opening session Dec. 2, U.N. Secretary-General Antonio Gutteres urged countries to take “more ambitious steps” to confront the global climate crisis, adding that “the point of no return” was “no longer over the horizon, but in sight and hurtling toward us.”

In a letter to the climate talks, Pope Francis said current commitments to mitigate climate change and alter human behavior fell short of what was needed.

“We must seriously ask ourselves if there is the political will to allocate with honesty, responsibility and courage more human, financial and technological resources to mitigate the negative effects of climate change,” the pope said in the letter, published Dec. 4.

Martinelli said the pope’s leadership was providing an “important coordinating impulse” for Catholic civil society actors worldwide and had fueled “engagement and commitment” among church organizations in Madrid.

She added that CIDSE, Caritas, the Catholic Climate Movement and other groups had welcomed the pope’s statement on the need to “listen to the science,” as well as his emphasis on “intergenerational justice” and his appeal to governments to “listen to the young people now filling streets all over the world.”

“The language used by the pope today is very much in line with the strong words used by U.N. and European Union officials, who are now quoting his words in a way which didn’t happen in the past,” she said.

“Change has to start with us, moved by our values, and we have to inspire and empower each other toward the ecological conversion urged by the pope, beginning with daily life and behavior,” she said.

COP25 is expected to agree to new rules for carbon markets under Article 6 of the Paris Agreement. Organizers hope to lay the groundwork for stronger climate pledges in 2020 to bring emissions and temperatures back into line with 2015 commitments.

Catholic organizations were to participate in a “People’s Climate March” Dec. 6 and a Mass concelebrated by Madrid Cardinal Carlos Osoro Sierra and the Peruvian Archbishop Miguel Cabrejos Vidarte, president of the Latina American bishops’ council, known by its Spanish acronym as CELAM.

NEXT: Indonesia to deploy 160,000 people to protect churches for Christmas