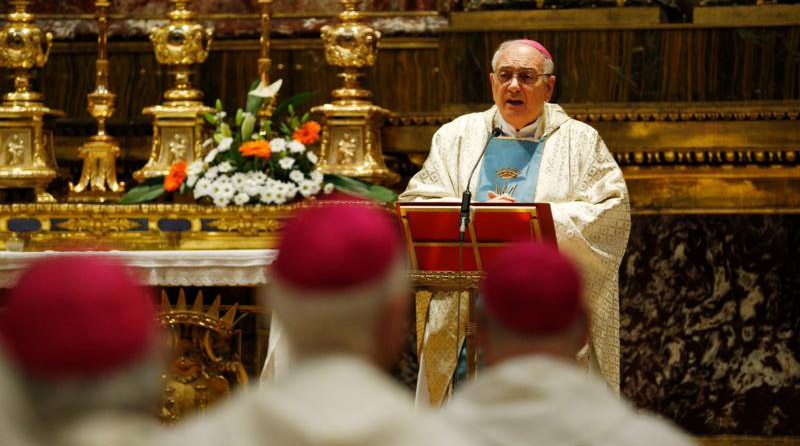 Bishop Nicholas A. DiMarzio of Brooklyn gives the homily as U.S. bishops from the state of New York concelebrate Mass at the Basilica of St. Mary Major in Rome Nov. 11, 2019. The Archdiocese of New York has confirmed opening an investigation of an abuse claim against the bishop due to an alleged incident from the 1970s. (CNS photo/Paul Haring)

WASHINGTON (CNS) — The Archdiocese of New York has confirmed it has begun an investigation of an abuse claim against Bishop Nicholas DiMarzio of Brooklyn, New York, who was threatened with a lawsuit by an attorney in November, alleging the prelate had abused a child decades ago while serving as a priest in New Jersey.

The bishop immediately denied the accusation Nov. 13, vowing to “vigorously defend” himself against the claim. Under new protocols concerning accusations against church higher-ups, the metropolitan archbishop, in this case Cardinal Timothy M. Dolan of New York, is charged with investigating any accusation made against another bishop in his region.

In a Jan. 21 statement from the Brooklyn Diocese, the bishop said he “looks forward to the investigation of the allegation made against him and having his good name cleared and restored.”

Several news stories have painted the Vatican as ordering the investigation, but the development seems to be more of a result of a new process of investigating bishops accused of abuse set forth in the papal decree “Vos Estis Lux Mundi,” or “You are the light of the world,” which outlines the protocols.

Under those new protocols, the Vatican’s Congregation for the Doctrine of the Faith asks the metropolitan of the region to begin the probe.

Though the attorney who threatened the lawsuit, Mitchell Garabedian, asked for the immediate removal of Bishop DiMarzio in November, the Diocese of Brooklyn said in a statement made available to Catholic News Service that “as the church investigation is a ‘Vos estis lux mundi’ probe, it does not require that Bishop DiMarzio step aside during the preliminary investigation. As such, his status has not changed.”

The Brooklyn Diocese said Garabedian has, to date, not filed a lawsuit. He made the allegation as the U.S. Conference of Catholic Bishops wrapped up the public portion of its fall meeting in Baltimore in late November, saying it pertained to the time Bishop DiMarzio was a priest at St. Nicholas Parish in Jersey City, New Jersey, in the 1970s. The bishop was ordained a priest for the Archdiocese of Newark, New Jersey, in 1970.

The January statement from the Brooklyn Diocese said the bishop has received “a tremendous outpouring of support” since the allegation was made public and that he has the support of “parishioners from his time as parochial vicar at St. Nicholas Church in Jersey City.”

It also said the bishop “is recognized as a leader in the fight against sexual abuse in the Catholic Church.”

“Even before the mandates of the 2002 ‘Charter for the Protection of Children and Young People,'” it continued, “Bishop DiMarzio created protocols when he was the bishop in the Diocese of Camden (New Jersey) from 1999 to 2003 to ensure that children were protected and that victims received the care they need.”

Bishop DiMarzio had been tasked with overseeing a probe concerning the handling of abuse cases in the Diocese of Buffalo, New York, where embattled Bishop Richard J. Malone ultimately stepped down in late 2019 following widespread criticism.