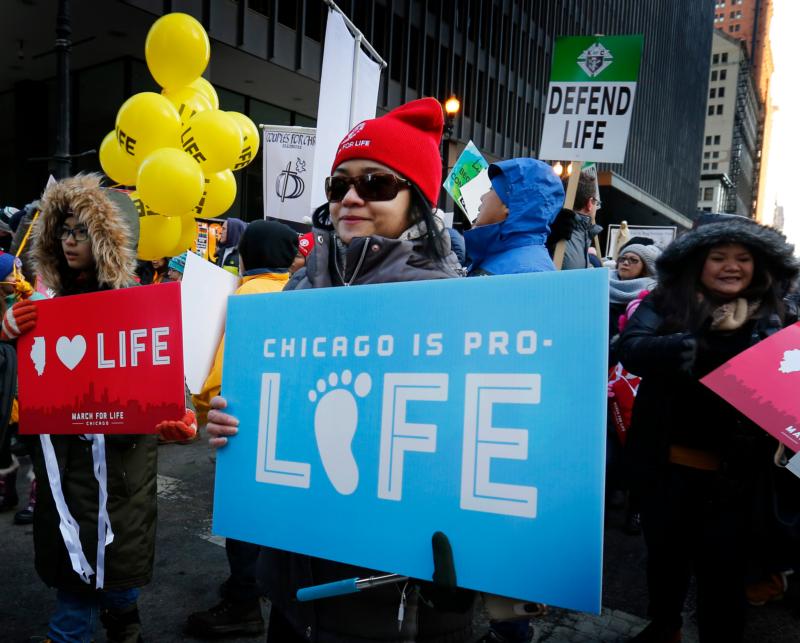 A woman carries a sign during the annual March for Life in Chicago Jan. 13, 2019. Participants in this year's March for Life, with the theme, "Life Empowers: Pro-Life is Pro-Woman," will kick off with a with a rally Jan. 11, 2020. As the annual event is attracting more people, organizers said this year's march will have many changes, starting with a new venue and a convention featuring pro-life ministries and other exhibitors. (CNS photo/Karen Callaway, Chicago Catholic)

CHICAGO (CNS) — March for Life Chicago is attracting more people each year and participants in this year’s event will notice lots of changes, starting with a new venue and a convention featuring pro-life ministries and other exhibitors.

The Jan. 11 march has as its theme “Life Empowers: Pro-Life is Pro-Woman,” and it will kick off with a rally at 1 p.m. at Daley Plaza, Chicago’s civic center.

It is preceded by a youth rally hosted by the Archdiocese of Chicago starting at 8 a.m. at the Congress Plaza Hotel, the site of the convention. The Mass for Life will be held at the hotel at 4 p.m., following the march, and the evening will feature a banquet and swing dance party.

Speakers at the outdoor rally include Chicago Cardinal Blase J. Cupich, Pat McCaskey of the Chicago Bears and Dawn Fitzpatrick, March for Life Chicago president and senior coordinator for the Archdiocese of Chicago’s Office of Human Dignity and Solidarity.

Fitzpatrick said the march was moved from Federal Plaza, a public square where it has been since 2014, to the larger Daley Plaza because organizers wanted to be able to accommodate larger crowds.

“Last year we were at a crossroads,” she said, with a crowd of over 8,000 people stretching the limits of Federal Plaza. “We’d like to break that 10,000-person ceiling this year.”

The march itself will travel from Daley Plaza to the Congress Plaza Hotel, ending just before the 4 p.m. Mass for Life.

The convention is intended to both attract more people and give them something to do. The convention, on the hotel’s ground floor will be open all day except during the march and rally. Convention attendees can register for a free fast pass to get in quickly to see the exhibits and meet fellow pro-life activists.

Kevin Grillot, executive director of WeDignify, formerly Students for Life of Illinois, said it’s especially significant that the march is drawing pro-life advocates from all over the Midwest to Illinois, which has more permissive abortion laws than most of the states around it.

WeDignify is organizing the convention, and Grillot said he hopes those who visit the exhibits find ways to continue their pro-life activism throughout the year.

“If people are looking for something other than the march they can do, this will offer that,” he told the Chicago Catholic, the archdiocesan newspaper. “They can learn about Biking for Babies and so many of the other organizations. They also can come inside, have something warm to drink and connect with the other marchers.”

Fitzpatrick agreed that the convention will allow for more networking among participants.

“This is a great entry point into the movement,” she said. “And even for people who are involved, churches can get some ideas of new things they can do.”

The banquet features speaker Claire Culwell, who survived the abortion her mother had. Her twin did not survive. The swing dance party that follows is aimed at, but not limited to, young adults.

“We really wanted to offer activities for all different age groups,” Grillot said.

The Chicago march has generally had high participation rates by youth and young adults, Fitzpatrick said, but participants range from children to people in their 90s.

U.S. Rep. Dan Lipinski, D-Illinois, who is among the scheduled speakers for the Jan. 11 rally, said in a statement he looked forward to “once again joining the growing crowd standing for life in Chicago.”

“Every January, I am proud to brave the cold and join the March for Life Chicago,” he said. “As a member of Congress, I work to protect the most vulnerable, and no one is more vulnerable than the child in the womb and that child’s mother.”

Lipinski said that when he speaks at the rally, he is “always inspired by all the young people — especially young women — who march because they understand that being pro-life is being pro-woman, and we must all do our part to support both women and their babies.”

NEXT: Flu factor: Churches act to stop virus from spreading