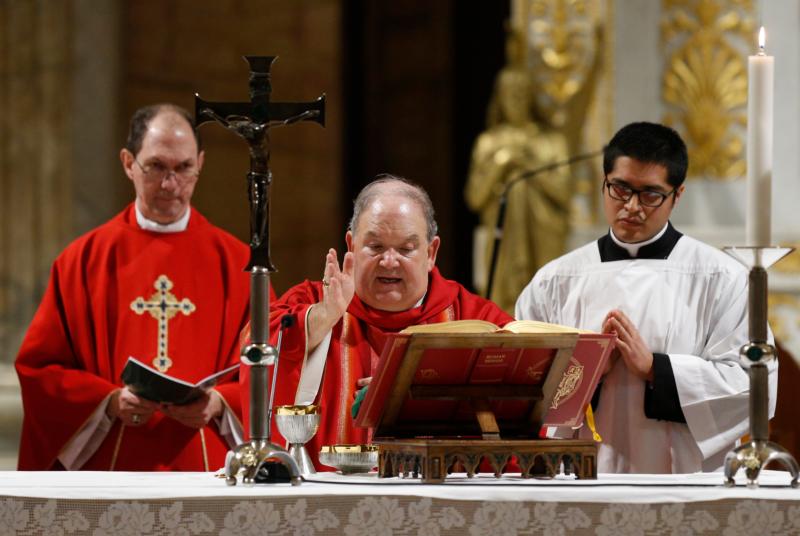 Archbishop Bernard A. Hebda of Saint Paul and Minneapolis concelebrates Mass with U.S. bishops from North Dakota, Minnesota and South Dakota at the Basilica of St. Paul Outside the Walls in Rome Jan. 15, 2020. Also pictured is Bishop John T. Folda of Fargo, N.D., left. The bishops were making their "ad limina" visits to the Vatican to report on the status of their dioceses to the pope and Vatican officials. (CNS photo/Paul Haring)

ROME (CNS) — The Catholic Church needs leaders who are willing to listen, learn, be healed and to serve and proclaim boldly what God has done in their lives, said Archbishop Bernard A. Hebda of St. Paul and Minneapolis.

“We have to remember that indeed nothing is impossible for God. No matter how low we might be, the Lord can lift us up to do that work that is his,” he said in his homily Jan. 15 during Mass at Rome’s Basilica of St. Paul Outside the Walls.

Archbishop Hebda was the principal celebrant and homilist at the Mass with the bishops of North Dakota, South Dakota and Minnesota. The bishops were making their visits “ad limina apostolorum” — to the threshold of the apostles — to report on the status of their dioceses.

The bishops rearranged their schedule of Mass celebrants so that the presider and homilist for Mass at the basilica housing the tomb of St. Paul would be the archbishop of St. Paul.

Thanking his brother bishops for giving him the opportunity for something that “seemed fitting,” Archbishop Hebda reflected on St. Paul’s reputation for being bold.

“My brother bishops know that sometimes we all want to be bold leaders, but it is hard to be bold when we are in need of healing and the church has been knocked down,” he said.

However, he said, that sense of defeat “certainly changes, my brothers, when the Lord intervenes,” as can be seen in the day’s readings — first about Samuel, a “low man on the totem pole” whom the Lord calls and lifts up to become a great prophet.

Then the day’s Gospel reading looked at St. Peter’s mother-in-law, who “allows the Lord to take her hand, to touch her, to heal her and then we read that she gets up and waits on the apostles, she gets up and serves,” he archbishop said.

St. Paul himself knows what it’s like to have been “knocked down” and blinded on the road to Damascus, “and yet it is the Lord who lifts him up to be the great teacher of the nations,” the archbishop said.

The basilica, too, was once destroyed by fire and then rebuilt, he added.

“It is possible to be knocked down, but then to be lifted up,” Archbishop Hebda said.

But every Christian must be willing to imitate St. Paul, who was so grateful for what God had done for him, including forgiving his sins, that he boldly went forward to proclaim God’s grace.

“All of us — bishops, laity, priests, deacons — we all have to be willing to imitate in that way,” the archbishop said.

“May we hear the Lord’s call clearly this day,” the archbishop said. “May we be the bold proclaimers of God’s goodness that he desires for this world” and may everyone, grateful for God’s goodness, respond by saying, “Here we are, Lord, we come to do your work.”