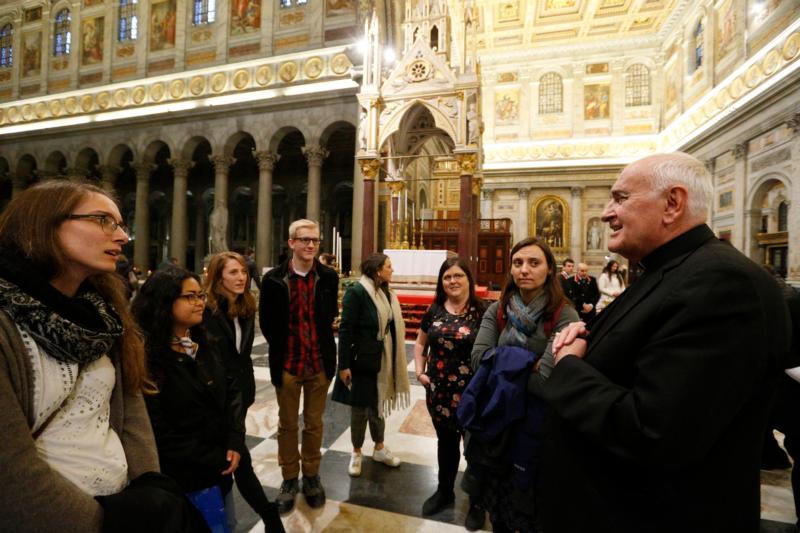 Bishop Donald J. Kettler of Saint Cloud, Minn., talks with a group of young adults after concelebrating Mass with U.S. bishops at the Basilica of St. Paul Outside the Walls in Rome Jan. 15, 2020. Young adults from the Archdiocese of Saint Paul and Minneapolis, the Diocese of New Ulm, Minn., and the Diocese of Bismarck, N.D., accompanied U.S. bishops from North Dakota, Minnesota and South Dakota on their "ad limina" visits to Rome. (CNS photo/Paul Haring)

VATICAN CITY (CNS) — Supporting and supported by their bishops, 25 young adults from Minnesota and North Dakota made a pilgrimage “ad limina apostolorum” — to the threshold of the apostles — in mid-January.

The delegation of women and men, single and married, ages 21-35 flew to Rome with the bishops of Region VIII, who are required by church law to make the “ad limina” visits to pray at the tombs of Sts. Peter and Paul and to meet with the pope and top Vatican officials.

Many dioceses offer pilgrimages to coincide with their bishops’ “ad limina” visits, but the Region VIII trip was different: Young adults were invited last May to apply to make the trip either by providing a letter of recommendation from someone who would attest to their leadership in evangelization or by writing a short essay on how Christ has worked through others to draw them closer to him.

While the region’s bishops met Pope Francis Jan. 13, the young pilgrims met him two days later after the pope’s weekly general audience. Two young men came bearing white zucchetti — the papal skullcaps — and the pope put each on his head, then handed it back as a souvenir.

Mychael Schilmoeller, 33, the pastoral care minister at St. Michael parish in Prior Lake, Minnesota, received special attention from Pope Francis. Noticing her belly, he asked when her baby is due. She told him, “St. Patrick’s Day,” and he blessed her unborn baby and gently touched her.

“I don’t usually like people touching me, but it was a beautiful blessing,” she said.

Vincenzo Randazzo of the Office of Evangelization of the Archdiocese of St. Paul and Minneapolis came up with the idea for the pilgrimage and presented it to Archbishop Bernard A. Hebda, who, he said, responded, “Let’s do it.”

“I want everything we do to be an effort to evangelization,” Randazzo told Catholic News Service. If the pilgrimage simply had a first-come-first-served sign-up policy, “we’d get the choir,” instead of a mix of young adults who are or potentially are evangelizers of their peers.

Will Herrmann, a 30-year-old computer programmer and member of St. Bonaventure parish in Bloomington, Minnesota, was the newest Catholic in the group. He entered the church last Easter.

Although he was surprised to be chosen for the pilgrimage, he said he applied because “I wanted to dive into the deep end of my faith.”

Speaking to CNS near the tomb of St. Paul, he said, “I feel like I married into this family and now I’m meeting the relatives — the saints.”

One thing the pilgrims have in common, Randazzo said, is how much of their time is spent online, including when seeking information about the faith.

As opposed to that “virtual reality,” Randazzo said, “Rome has lots of stuff” with art and architecture and the actual places where Sts. Peter and Paul and a host of other saints lived, died and were buried.

Another pilgrim, Mary Evinger, 29, the director of religious education at St. Joseph’s parish in Williston, North Dakota, is planning to bring high school students to Rome precisely for that reason.

“They’re just on their screens, and just seeing an image isn’t the same,” she said. “You don’t get that awe of being there.”

“Being there” — in the basilicas, the Vatican Museums, the Colosseum — was a big motivator for Evinger to apply for the pilgrimage, she said. But she also wanted to be with the region’s bishops and with Pope Francis.

Organizing the pilgrimage was part of the Archdiocese of St. Paul and Minneapolis’ ongoing response to young adults who wrote Archbishop Hebda an open letter in 2018 about what they want from the church, the archbishop told CNS.

The youthful pilgrims, the archbishop said, told the bishops they were making the pilgrimage “to pray for Pope Francis and then to pray for their bishops.”

Most of the pilgrims already have completed university and are “trying to figure out where they are in the church now that they are working and living on their own,” he said. They want to know where God is calling them to serve.

“It’s no secret that one of the things that the church, at least in the United States, struggles with is young people drifting at times,” Archbishop Hebda said, so when the region’s bishops met Pope Francis, they assured him “there also were young people who were very much involved in the church, who loved him and certainly the way he articulates his ministry.”

Randazzo said it is easy for Catholics to notice the scandals and the problems afflicting the church, but “it takes courage to recognize God is doing something incredible,” and the growing faith of many young adults is one of those things.