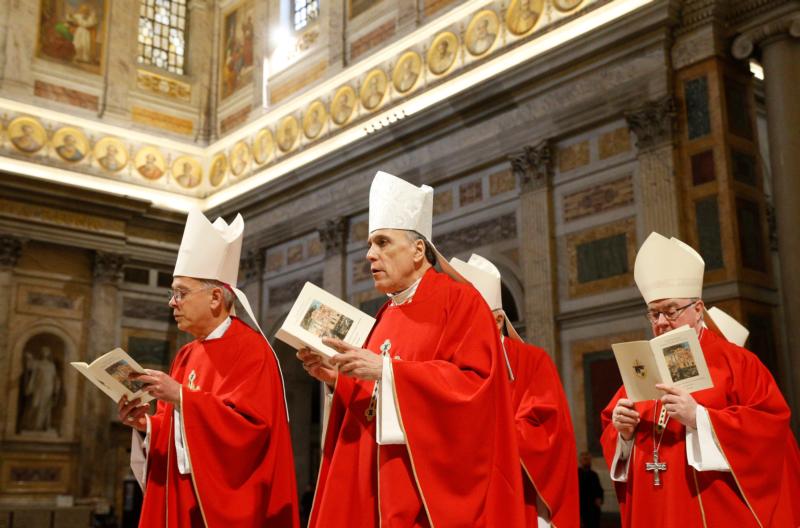 Cardinal Daniel N. DiNardo of Galveston-Houston, center, and other U.S. bishops from Arkansas, Oklahoma and Texas concelebrate Mass at the Basilica of St. Paul Outside the Walls in Rome Jan. 21, 2020. The bishops were making their "ad limina" visits to the Vatican to report on the status of their dioceses to the pope and Vatican officials. (CNS photo/Paul Haring)

ROME (CNS) — A pilgrimage to the apostles’ tombs in Rome helps bishops renew their sense of unity as well as rededicate themselves to being missionaries bringing the Gospel to the world, said Archbishop Paul S. Coakley of Oklahoma City.

“That’s what we are here to celebrate and acknowledge today — our communion with Peter and our mission ‘ad gentes’ to the nations, to the ends of the earth,” Archbishop Coakley said in his homily during Mass at the Basilica of St. Paul Outside the Walls Jan. 21.

The archbishop was the principal celebrant and homilist at the Mass with bishops from Arkansas, Oklahoma and Texas. The bishops were in Rome as part of their visits “ad limina apostolorum” — to the threshold of the apostles — to pray and also to report on the status of their dioceses in meetings with the pope and Vatican officials.

Similar to the way a centripetal force pulls an orbiting body toward the center, “St. Peter represents that center of unity for the church. Communion with Peter draws us to that center of life that ensures our unity and communion with one another and with the Lord,” he said.

And similar to the way a centrifugal force pushes an orbiting body away from the center, one can see “the mission of St. Paul, who went out beyond the Jewish world, sent to the nations, to the ends of the earth, to proclaim the Gospel, to bear witness to Jesus Christ,” he said.

“The church needs both,” he said. “We need Peter. We need Paul. We need all that they represent.”

Reflecting on the day’s first reading from the First Book of Samuel (16:1-13), the archbishop looked at the “mysterious” way God chose, from among Jesse’s sons, the leader to succeed Saul.

The sons that impressed Samuel were rejected by God, who told Samuel that humanity only sees and judges from appearances, but the Lord “looks into the heart,” according to the reading.

In fact, God chose the youngest son, David, a shepherd and “not the obvious choice,” the archbishop said.

St. Paul, too, was not an obvious choice; he persecuted Christians, and yet, God blinded him before enlightening him, “choosing him, giving him a new name and a new mission,” he said.

Reflecting on this, he said, “we cannot help but recall the way in which the Lord chose us and indicated his choice of each of us. It can probably be said that we were not all the obvious choice.”

“God chooses us not because we are worthy of having been chosen, but God has chosen us so that his power might be made perfect, might be made manifest in our weakness,” he said.

“These days we are certainly very much aware of the weakness of the church’s ministers, bishops, her priests, all of God’s people. We are weak, but God makes us strong through faith, through the power of his spirit.”

The bishops’ pilgrimage to Rome and the Vatican is a way “to renew our commitment to the call that each one of us has received.”

“This is the source of our strength, in our weakness we are strong when we trust in the Lord and recommit ourselves to the apostolic mission we have received together as successors of the apostles,” he said.