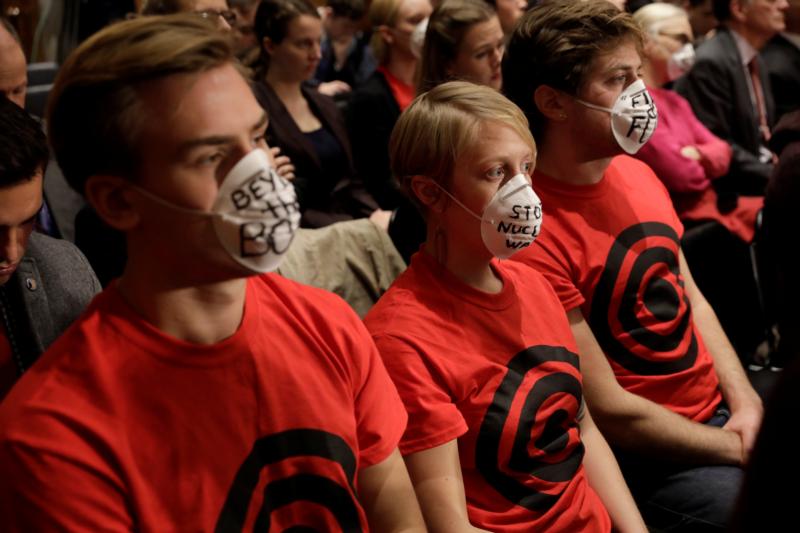 Nuclear disarmament proponents sit in a hearing of the U.S. Senate Foreign Relations Committee about presidential authority to use nuclear weapons on Capitol Hill in Washington Nov. 14, 2017. Disarmament advocates in the Catholic Church and beyond are part of a campaign to extend by five years the New Strategic Arms Reduction Treaty between the U.S. and Russia. (CNS photo/Yuri Gripas, Reuters)

WASHINGTON (CNS) — The Cold War may have ended in 1991, but nuclear disarmament advocates in the Catholic Church and beyond say nuclear weapons still pose a grave danger to humanity.

For months these advocates have been ramping up efforts to preserve the last remaining nuclear arms control pact between the United States and Russia before it expires in February 2021.

“A lot of people have put a lot of work into it,” Marie Dennis, senior adviser to the secretary-general of Pax Christi International, said of the worldwide campaign to keep alive the 10-year-old New Strategic Arms Reduction Treaty, known as New START.

Without New START being extended by next year, there would be no nuclear arms control agreements in place between the U.S. and Russia for the first time since 1972.

“The impetus from nonnuclear states and the planetary consequences (outlined) by the International Red Cross shifted the energy to where it ought to be, which is a world that is going to be affected tremendously by any exchange of nuclear weapons,” Dennis told Catholic News Service in her Washington office.

The advocates are not operating alone. They have had the words of Pope Francis to support their work, said David Cortright, director of policy studies at the University of Notre Dame’s Kroc Institute for International Peace Studies.

Throughout his papacy, Pope Francis has amplified the call of his predecessors for nuclear disarmament. His most recent public comments have staked out a higher moral ground.

During a November visit to Hiroshima, Japan, the pope said it was “perverse” to think the threat posed by nuclear weapons makes the world safer. And in an address to diplomats at the Vatican in January, he renewed his appeal for a world without nuclear weapons because “true peace cannot be built on the threat of a possible total annihilation of humanity.”

“These weapons do not only foster a climate of fear, suspicion and hostility,” he said. “They also destroy hope. Their use is immoral, a crime not only against the dignity of human beings but against any possible future for our common home.”

The challenge, arms control advocates cautioned, is that the nuclear threat is not on the public’s mind.

“People are unaware that we are in the midst of a new nuclear arms race,” said Maryann Cusimano Love, associate professor of international politics at The Catholic University of America. “The (Trump) administration is developing new types of nuclear arms under a huge spending spree to build new types of weapons” even though their numbers are capped at 1,550 deployed warheads under New START.

Nick Mele, a consultant to Pax Christi USA, said it’s as if the arms race ended with the 1991 collapse of the former Soviet Union.

“A lot of people think that somehow nuclear weapons disappeared at the end of the Cold War,” Mele said. “We have to raise public awareness and also lobby our elected officials.”

The lobbying effort took a big step Jan. 28. Seeking New START’s extension for five years was among the four major “asks” the 600 attendees of this year’s Catholic Social Ministry Gathering in Washington took to their members of Congress.

In their Capitol Hill visits, diocesan social action staff, university students, clergy, women religious and members of Catholic Campaign for Human Development-funded organizations urged Republicans and Democrats to support companion bills in the House of Representatives (H.R. 2529) and the Senate (S. 2394) that express the “sense of Congress” in supporting extension of the treaty.

The extension has bipartisan support in both chambers of Congress as well as at the Pentagon, largely because of the strong inspection and verification protocols included in the treaty.

Russian President Vladimir Putin has said he is willing to extend the pact with no conditions attached. That leaves U.S. President Donald Trump as the key to New START’s future. He has not indicated a willingness to sign an extension.

The president, however, has hinted at developing a wider agreement, one that would include China. But observers such as Thomas Countryman, a former Department of State diplomat who is chairman of the board of the Arms Control Association, said there’s not enough time to negotiate a comprehensive three-party arms control treaty.

That makes the effort on New START all the more important, he told a meeting of the U.S. bishops’ Committee on International Justice and Peace in October.

“(Trump) has to be convinced that it is a personal and political victory for him,” Countryman told CNS in mid-January. “If that means, for example, that he needs to add an additional page as a cover declaration to the extension of the treaty, that would be good.”

The recent push by the Catholic advocates falls in line with the long history of support for nuclear disarmament by the U.S. Catholic bishops. From the 1983 pastoral letter, “The Challenge of Peace: God’s Promise and Our Response,” to numerous letters to congressional leaders and presidential administrations, the bishops have maintained a consistent call that the only appropriate moral action is to work toward total nuclear disarmament.

The bishops’ most recent stance came in a Nov. 27 letter to members of Congress from Bishop David J. Malloy of Rockford, Illinois, chairman of the Committee on International Justice and Peace. In it, he called for support of the respective legislation in each chamber that the advocates addressed during their Capitol Hill visits.

“The bipartisan nature of this initiative is important,” the letter said. “Historically, nuclear disarmament as a security and moral concern has been supported by leaders of both major political parties.”

The voices of Catholic bishops and lay activists received praise from across the arms control community for having a major role in pushing the New START pact over the finish line in the Senate in December 2009.

“There’s a moral commitment to the abolition of these weapons,” he told CNS. “But we have to realize that right now all the direction is in the opposite perspective and if we don’t act now to restrain the current nuclear buildup, the upgrading of all our nuclear weapons, there’s going to be no hope of nuclear abolition.”

PREVIOUS: Priest needs liver transplant; will a donor show up in time?

NEXT: Pastor apologizes for words ‘hurtful to Muslims’ in homily