Priest needs liver transplant; will a donor show up in time? 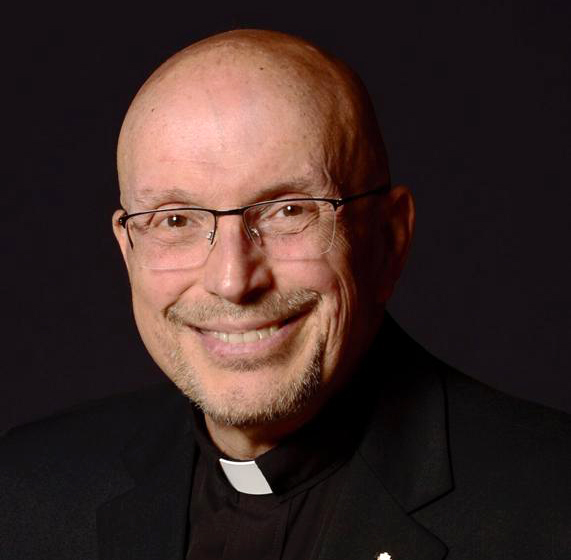 Father John P. Mack, a priest of the Diocese of Buffalo, N.Y., is seen in this undated photo. He was diagnosed with nonalcoholic cirrhosis of the liver five years ago and is in need of a transplant. (CNS photo/courtesy Keenan Communications Group)

WASHINGTON (CNS) — Father John Mack, a priest of the Diocese of Buffalo, New York, needs a liver transplant — from a living donor.

Living donors have been judged to be better donors than cadavers. The recipient receives a portion of the healthy donor’s liver (more than half usually), and typically the organ will grow back to normal size in both the recipient and the donor within several weeks. Relatives make the best donors of all.

But Father Mack, being celibate, has no children. He also is an only child.

Research indicates the best donors are between the ages of 18 and 60. And all of the priest’s cousins are older than he is — and he is 65.

Nobody knows, but Father Mack, who has been living with liver disease for the past five years — and whose manifestations really knocked him for a loop 18 months ago — could be one of the 20% to 25% of people waiting for a transplant who die before getting one.

Father Mack, in a Jan. 22 telephone interview with Catholic News Service from Christ the King Seminary near Buffalo in East Aurora, New York, where he teaches, said his prayer life changed when his health worsened in mid-2018.

Despite all of this seemingly bad news, “the miracles keep happening,” he said. Even though Father Mack has no kin eligible to donate part of their liver, enough people have learned of his plight to call the University of Rochester Medical Center to see if they are a match for the priest that appointments were backed up into mid-February, he added.

“I’m not sick enough to get a cadaver donor,” Father Mack said, adding, “There’s never enough livers. So the living donor’s liver is somebody who is, hopefully, generous and qualified.”

He said, “If they go through some testing, and if they agree (to donate), they go through the surgery.” It takes six to eight weeks for the donor to recover fully; it’s two months minimum for the typical transplant recipient, according to Father Mack, and there’s far more frequent monitoring in case the body rejects the organ.

Father Mack has nonalcoholic cirrhosis of the liver. “Fatty liver disease is the second largest disease of people going in for transplants. I was never a drinker,” he told CNS. “It’s a lot more common than it used to be. Before it was only drinkers.” It results, he said, from eating “fast foods, a lot of food.”

“I would be around 220, 225 (pounds), but when I started gaining over the summer (of 2018), I didn’t realize that I was beginning to look like a Macy’s Thanksgiving Day Parade balloon,” Father Mack added.

Then his weight went from 240 to 165 in a hurry; he’s now at 190 pounds. “People looked at me that Christmas and they were frightened,” he said.

After the first symptoms surfaced, “I learned to live with the chronic illness, and I was pretty much back to normal in terms of working,” he recalled. He would teach at the seminary, and help out at a nearby parish on weekends. “I used to be able to pack in 12-, 16-hour days. I can’t do that anymore.”

It got so drastic at one point that “there were a couple of months I couldn’t do Mass in public at all. I couldn’t be trusted. I ran out of steam,” said Father Mack.

A priest since 1985, his pastoral ministry has included several tours as a military chaplain, with deployments to Colombia, Guantanamo Bay in Cuba, Pakistan and Qatar. He’s also a book author and a fourth-degree Knight of Columbus.

Without discussing the particulars of Father Mack’s case, Dr. Mark Levstik, medical director of transplant hepatology for the UR Medicine Transplant program at the University of Rochester Medical Center in New York, said: “The organ shortage is one of the biggest struggles we face. That’s because liver transplantation has become so successful. More than 90% of people will survive liver transplantation and do well.” At the University of Rochester, he added, their success rate is 93.8%.

“The fortunate thing is this is such a good procedure. The difficulty is finding very qualified surgical, medical multidisciplinary teams that can do it,” Levstik said.

For those suffering liver failure, he added, “they’re losing quality of life for them and their family. … Not only is their income lost, but their loving, sharing and living.”

There are at least 6,500 Americans waiting for a liver transplant, and likely more, Levstik said and “no anonymous bank of willing donors sitting on the sideline.”

Father Mack said, “I’ve been living with this so long, that I’ve almost forgotten what it’s like to feel normal, but I’d like to get back to that feeling now. I really would. There’s things I’d like to do. One of them is not being sick.”

PREVIOUS: Laity said to be key as county oversight of Minnesota archdiocese ends