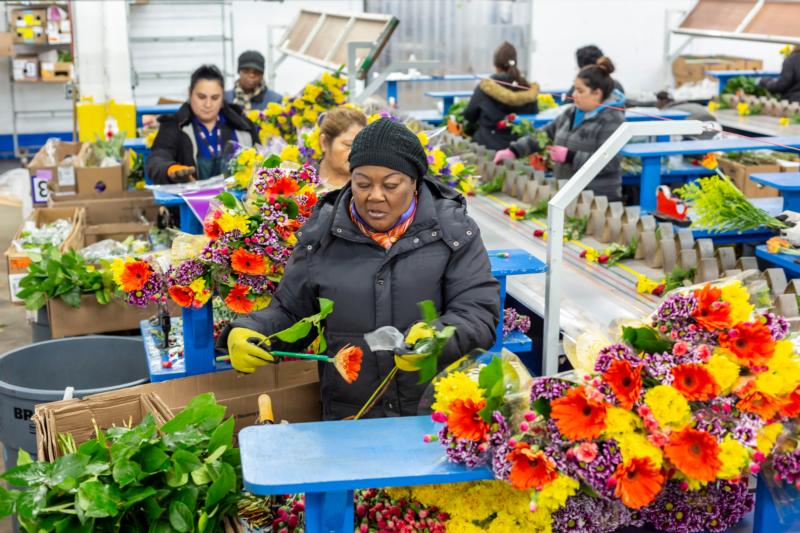 Workers process cut flowers from South America in April 2018 at a warehouse in Doral, Fla. Working in 40-degrees temperatures, women package flowers for supermarkets and other outlets and fulfill orders for online retailers. (CNS photo/Jim West)

WASHINGTON (CNS) — The gains made by some of the Washington area’s lowest-paid workers require much effort but are necessary in one of the country’s least affordable regions, two worker activists said during a Jan. 22 forum at Georgetown University.

The average pay for custodial workers in the region is $12 an hour, according to Clayton Sinyai, executive director of the Catholic Labor Network, a co-sponsor of the forum. Assuming that custodians are assigned 40-hour workweeks, that translates to $24,000 a year.

For food-service workers at the two airports in Virginia that serve the Washington region, the average pay is even less: $11.09 an hour, Sinyai said. That comes to $22,000 a year, assuming full-time work.

Tenae Stover, who works for LSG Sky Chefs at Ronald Reagan Washington National Airport, said her starting pay was $8.40 an hour, while health insurance came to $60 a week. “I was no longer able to take care of myself. I was kicked out of my place,” she said.

Stover is a member of the bargaining team for her union local, which is represented by UNITE HERE. The team, she said, is still in negotiations with LSG Sky Chefs, whose largest customer at the airport is American Airlines.

She was a late arrival to the forum, as her supervisor made her work extra. Stover explained that Wednesdays are new-employee orientation days, made all the more necessary because the low pay results in a turnover rate of 50% a year.

The forum, “Why Unions? Area Workers Speak Out: Workers and the Church in the Washington D.C. Area,” was co-sponsored by Georgetown’s Kalmanovitz Initiative for Labor and the Working Poor.

Stover backs the “Fight for $15” movement, which is arguing for a $15 hourly minimum wage for all workers. The federal minimum wage is $7.25 an hour, although most states — not Virginia — and many municipalities have enacted higher minimum wages. Sinyai said a priest from the Diocese of Arlington, where the airport is located, traveled to the state Capitol in Richmond earlier this year with others to press for raising Virginia’s minimum wage.

“The flight attendants and the pilots, they have come to our rallies” at the airport, Stover said. Airport employees need presidential permission to strike, but the food service workers have adopted the tactics of the Association of Flight Attendants union’s “CHAOS” — an acronym for Create Havoc Around Our System — to get their point across away from the bargaining table.

LSG Sky Chefs issued a statement about the negotiations in a Jan. 27 email to Catholic News Service: “Our negotiating team and a federal mediator have been working since May 2019 to negotiate in good faith with the union representing our employees. Our company has offered improvements in wages, and is discussing numerous other issues covered by our collective bargaining agreement.”

It added: “While this is a short period of time to negotiate a complex labor agreement, we feel progress is being made with the help of the federal mediator.”

At the Jan. 22 forum, Jesus Salazar, a janitor and member of a Service Employees International Union local for building service workers in the Washington area, said he came to the United States from Peru because he was blocked from going to college in his home country.

Salazar took a job as a building custodian and started at $5.40 an hour. Now he’s at $16.10 an hour. The latest contract, the major provisions of which were printed on a poster he frequently displayed during his remarks, includes sick days, vacation time, health insurance including vision and dental, and even three “grievance days” should workplace disputes require time away from the job to get them resolved.

Speaking through an interpreter, Salazar said sexual harassment is a workplace issue for both women and men in the custodial trade. In the last contract, which covers roughly 60 building owners and landlords, all agreed to a uniform system to report and adjudicate harassment allegations.

Salazar told the forum workers are organized into “brigades” to go to buildings and explain contract issues to the workers there. Salazar himself has been part of five such brigades in the past four rounds of negotiations.

A member of two parishes — one in Washington and another in Virginia — Salazar said his Catholic faith plays a big part in his activism. “I tell my priest what is going on, and he understands,” Salazar said.

In addition, Salazar helps organize religious processions common in his native Peru and replicates them in Washington. But he has involved workers from other countries and cultures in the parade as well.

John Carr, director of the Georgetown Initiative on Catholic Social Thought and Public Life and another forum panelist, spoke glowingly of the pro-worker credentials of St. John Paul II and Pope Francis.

“It wasn’t the AFL-CIO that said workers are indispensable. It was John Paul II who said that,” Carr said. And “Pope Francis is absolutely a champion of workers,” he said, adding his philosophy is “not about helping people have more, it’s about helping people be more.”

Carr recalled the time Pope Francis gave the Roman Curia a dressing-down at its annual Christmas party, then left to join Vatican workers at their own Christmas festivities.

NEXT: Pro-life leaders urged to continue to use their gifts for ‘Gospel of Life’