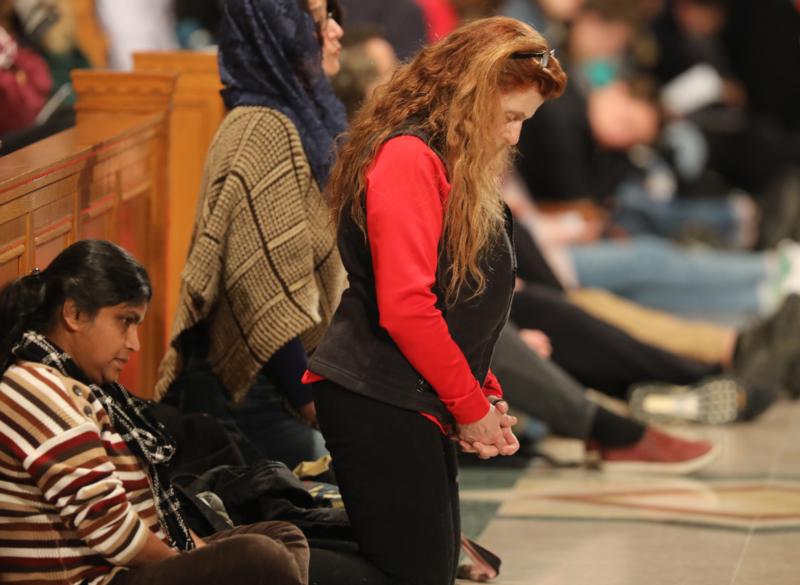 A woman kneels in prayer before the start of the closing Mass of the National Prayer Vigil for Life Jan. 24, 2020, at the Basilica of the National Shrine of the Immaculate Conception in Washington. (CNS photo/Bob Roller)

WASHINGTON (CNS) — In closing comments at a Jan. 23 Mass for pro-life leaders, Archbishop Joseph F. Naumann of Kansas City, Kansas, urged the congregation not to let “politicians divide us” and to continue working “however God is calling us to build the kingdom of God.”

The archbishop, who is chairman of the U.S. bishops’ Committee on Pro-Life Activities, acknowledged that those who attended the Mass represented fields of academia, health care, social justice and those on the front lines of the pro-life movement and stressed that everyone there in their unique way was “living out the Gospel of Life.”

He joked that the congregation of about 100 people who filled the chapel at the Washington Retreat House, near the Basilica of the National Shrine of the Immaculate Conception in Washington, probably thought they were getting a second homily when he urged them to be seated at the end of Mass.

He said he mainly wanted to thank them for the work they do in the pro-life apostolate. He also shared his own experience of his ordination to the priesthood in 1975 when he was asked how he might best use his gifts for the church. At the time, inspired by the Rev. Martin Luther King Jr., and the civil rights movement, he said he wanted to serve in the city.

Nine years later, he finally got the chance to follow this calling when he was assigned to an inner-city parish and also to work with priests serving in pro-life ministry — ministries that complemented and supported each other, he said.

The archbishop said the annual Mass, sponsored by the USCCB’s Committee on Pro-Life Activities prior to the March for Life events, is a “beautiful gathering.”

The Mass, at the retreat house run by the Franciscan Sisters of the Atonement, took place as crowds of young people were being dropped off by the busloads at the adjacent St. John Paul II National Shrine and were making their way up the street to the basilica where many were gathering for the vigil Mass the night before March for Life events.

Bishop Joseph L. Coffey, an auxiliary bishop for the U.S. Archdiocese for the Military Services, gave the homily at the pro-life leadership Mass where he urged the congregation to continue to be steadfast in their ministries, pointing out that by following the examples of the saints they should be willing to die for their beliefs.

“We have to be strong. We will have to make hard decisions,” he said, noting that this may cause some to lose friends or close relationships with family members who might say we are “unrealistic or rigid.”

“Doctors may lose patience and incomes needed for their families,” he said. “But what if any one of us in any profession, including me, is forced by the state to violate our conscience?”

“What are we prepared to face: fines, prison, what about death?” he asked.

The bishop said he believes the Catholic faith has taught us to “be ready to die for our faith.”

“Everybody in this ministry knows there is suffering involved,” he said, but he added a positive message as well, saying: “There is joy because we know we’re doing the right thing as we get ready to march in the March for Life.”

NEXT: Marching for life ‘an authentic act of patriotism,’ archbishop says