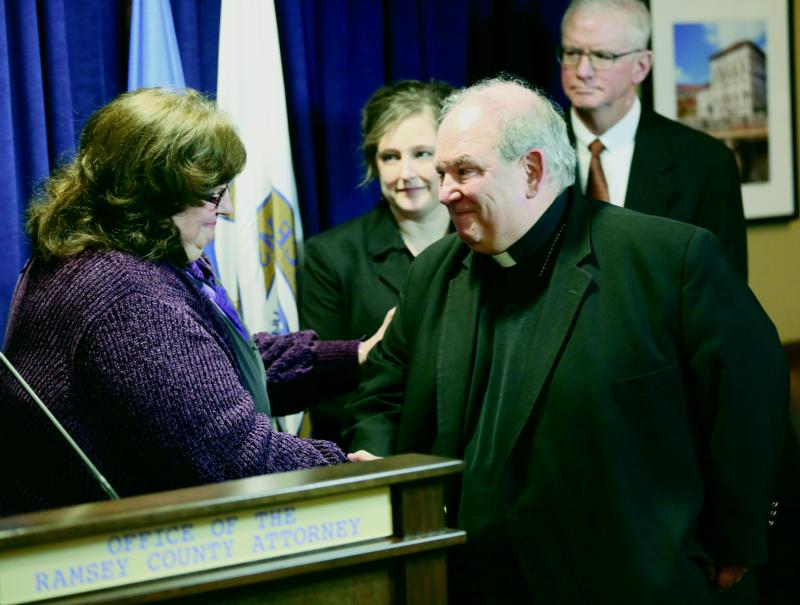 Joy Hoffman greets Archbishop Bernard A. Hebda of St. Paul and Minneapolis near the end of a Jan. 28, 2020, news conference in downtown St. Paul at the Ramsey County Attorney's Office announcing the end of a settlement agreement between the county and the archdiocese. Hoffman's three sons were abused by former priest Curtis Wehmeyer while he was pastor of Blessed Sacrament in St. Paul and she was an employee. (CNS photo/Dave Hrbacek, The Catholic Spirit)

Choi and his staff have been deeply involved in the efforts of the archdiocese to improve its policies, procedures and practices around protecting children from sexual abuse during the past four years.

His office’s oversight of the archdiocese ends Feb. 1. However, Choi is convinced that the strides taken by the archdiocese have resulted in a sustainable culture change that makes it possible for the archdiocese to continue to move in the right direction.

“(The archdiocese has) accomplished a culture in which they’re constantly evaluating themselves in terms of the settlement agreement and the promises they’ve made and the progress that they’re undertaking,” Choi told The Catholic Spirit, the archdiocesan newspaper. “Just a lot of things have changed for the better, and it wouldn’t have changed unless we would have come to this arrangement where we came to a settlement agreement.”

That doesn’t, however, mean that everything is done, Choi cautioned. “If the goal is to get to the top of the mountain,” he said, “we continue that climb.”

The county’s oversight began with the December 2015 settlement of a civil petition against the archdiocese regarding how it handled a case of clergy sexual abuse in the early 2010s. The settlement included a 24-page agreement outlining steps the archdiocese agreed to take to improve its child protection practices.

Choi announced the settlement with Archbishop Bernard A. Hebda, whom Pope Francis appointed to lead the archdiocese following the resignation of Archbishop John C. Nienstedt in 2015; Auxiliary Bishop Lee A. Piche resigned at the same time.

Archbishop Hebda and archdiocesan officials who crafted the settlement agreement with Choi’s office supported robust requirements to show that the archdiocese was serious about child protection. Church officials wanted the county to publicly vouch for the progress made, the archbishop said.

At the time, the archdiocese already was evaluating its safe environment policies. In 2013, Archbishop Nienstedt commissioned a firm to review clergy files for all abuse accusations. He also established a task force to study the archdiocese’s handling of clergy abuse and misconduct and to offer specific recommendations to improve policies and procedures.

Among the recommendations was that a layperson oversee child protection efforts and report directly to the archbishop. In 2014, Tim O’Malley, a former judge and Minnesota law enforcement leader, was appointed to the new position of director of ministerial standards and safe environment.

Meanwhile, the archdiocese had settled in October 2014 with “Doe 1,” a clergy abuse survivor who was the first to file a lawsuit against the archdiocese following the state’s 2013 lifting of the statute of limitations on child sex abuse. More than 450 victim-survivors would eventually file claims, leading the archdiocese to enter bankruptcy in 2015. It emerged from bankruptcy in December 2018.

The settlement with Doe 1 included 17 protocols the archdiocese agreed to follow that strengthen its child protection efforts.

When the archdiocese settled with Ramsey County a year later, the agreement — essentially a child protection plan — required the archdiocese to continue the 17 protocols, make them available online, increase the involvement of lay Catholics and engage in restorative justice with abuse survivors.

The agreement also gave Choi’s office oversight of the plan. The parties originally agreed to three years of oversight, but the agreement was amended and the oversight period was extended in July 2016, when Ramsey County dropped criminal charges related to the case.

Since the agreement was reached, the archdiocese has appeared before Ramsey County Court Judge Teresa Warner every six months to report on its progress. She found the archdiocese compliant at each hearing.

Both the archdiocese and Ramsey County said they are confident the agreement has served its purpose: that the archdiocese has experienced significant culture change and that child protection is an utmost priority.

In preparation for the final hearing, Choi’s office interviewed more than 50 stakeholders in the archdiocese about its culture as it relates to child protection and responding to survivors. A 25-page executive summary included assessments of different facets of the archdiocese, from priests to the laity and from seminaries to schools.

“Through its current leadership, the archdiocese has demonstrated what appears to be a very sincere institutional commitment to protecting children from sexual abuse by clergy,” the report concluded. “Safe environment efforts are quite different today than they were four years ago, and the archdiocese should be recognized for its accomplishments.”

The report included recommendations for areas of improvement, noting “there is more that can be done to protect children and provide healing.” It called for the archdiocese to make a public commitment to “continued forward movement and public accountability.”

To that end, the archdiocese filed with the court a safe environment plan that outlines its intentions to continue the policies put in place under the settlement agreement and continued oversight through regular outside audits.

As the agreement comes to a close, Choi said he is pleased with the outcome. Much of his confidence in the archdiocese’s future comes from greater lay involvement in the creation and execution of safe environment protocols, which are now carried out by two archdiocesan offices staffed by laypeople as opposed to a single priest as per past practice.

O’Malley’s team includes a past coordinator of Minnesota’s AMBER Alert program and a former superintendent of the Minnesota Bureau of Criminal Apprehension.

They are supported by the archdiocesan Office for the Protection of Children and Young Adults, which includes four liaisons who work with parishes to implement and maintain compliance with archdiocesan policies. Also in that office is an outreach coordinator for restorative justice and abuse prevention, Paula Kaempffer, herself an abuse survivor.

In addition, a Minneapolis attorney serves as an independent, volunteer ombudsman to listen to and advocate for survivors. The office also provides survivor assistance through an independent mental health care provider.

Advising the archbishop on all misconduct accusations is the archdiocese’s Ministerial Review Board, which is comprised mostly of laypeople, including abuse survivors and non-Catholics.

From the beginning, archdiocesan leaders approached the settlement agreement “as what’s the right thing to do, not necessarily what is Ramsey County going to ask us to do,” Archbishop Hebda said.

“We wanted to show our resolve and have someone be able to verify the progress that was being made. And that’s what I think we’ve seen at the end of this time period,” he said. “Hopefully we have in place a way of moving forward that has already embedded accountability into what we do.”

Trust and transparency continue to be a challenge for the church, and on the local level, Ramsey County has been the check. Without Ramsey County’s oversight, the church must hold itself accountable, Choi said, and the laity must assume that responsibility.

“That’s the critical piece of it,” he said. “If people just want to wash their hands of it and say ‘Everything is taken care of (and) I don’t have to do anything,’ that’s not going to be a recipe for success. But if people are recognizing that the church needs the help of the faithful to be successful, then that’s even better.”

Archbishop Hebda agreed with Choi that the laity has a major role to play in making sure the changed culture persists and transparency is maintained.

NEXT: Priest needs liver transplant; will a donor show up in time?