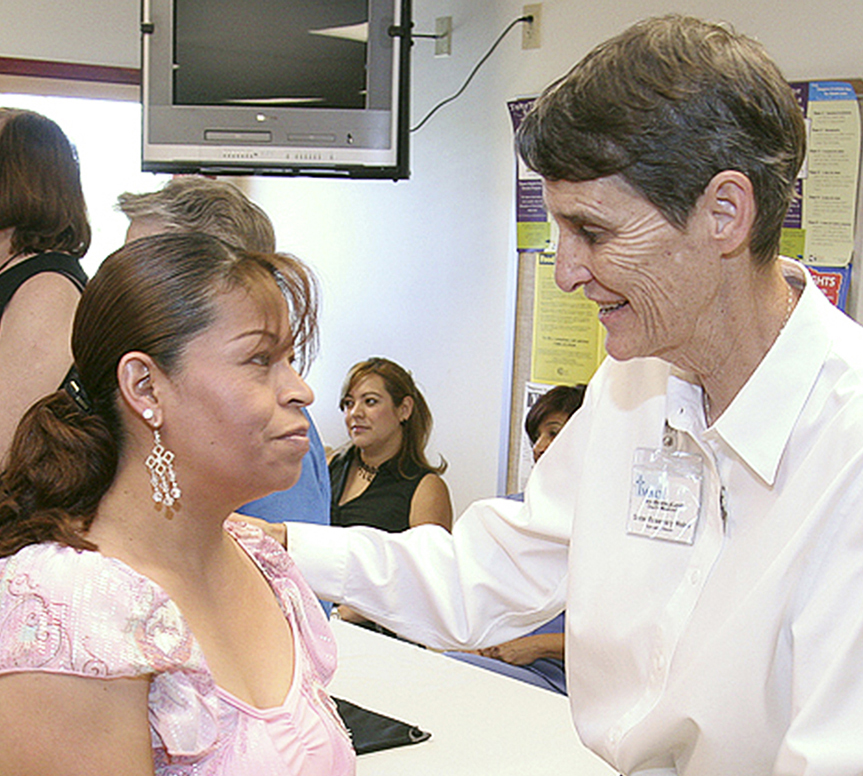 Mercy Sister Rosemary Welsh talks with a student graduate at the Case de Misericordia, (House of Mercy), in Laredo, Texas, in this 2015 file photo. The House of Mercy is a domestic violence shelter run by her order, and a health clinic that includes a van that visits 14 sites around Laredo. (CNS photo/courtesy Sisters of Mercy of the Americas)

WASHINGTON (CNS) — Mercy Sister Rosemary Welsh is a nurse and for the past 44 years she has immersed her ministry in the Latino culture.

Through the lives of thousands of migrants from Mexico and Central America as well as Texans of Hispanic descent, Sister Welsh has seen in her work in Laredo, Texas, and for a decade in Guatemala, that the needs of poor people remain much the same today as they did in 1976 when she arrived at the U.S.-Mexico border.

For that, she expressed gratitude.

“I just love it here,” she told Catholic News Service. “I love the people.”

Today, Sister Welsh, 75, works with Casa de Misericordia (“House of Mercy”), a domestic violence shelter run by her order, and a health clinic that includes a van that visits 14 sites around Laredo.

The needs of migrating Latinos are great, she said, because they arrive in the U.S. with little more than the clothes they are wearing. Her time in Guatemala from 1981 to 1991, in the midst of a violent civil war, led her to understand why people fled then and continue today to flee northward: They live in deep poverty and fear violence and they seek a safe and secure future for their families.

In recent years, however, the ministry has become more difficult. Often, migrants are afraid to come to the clinic or even seek help from the shelter because they fear being discovered by U.S. immigration agents. In years past, she said, women who would present themselves at the border as a victim of domestic violence would be let into the country. “That is not working now,” she said.

Sister Welsh said that she tells the people to whom she ministers that they will never be turned in by the Sisters of Mercy. 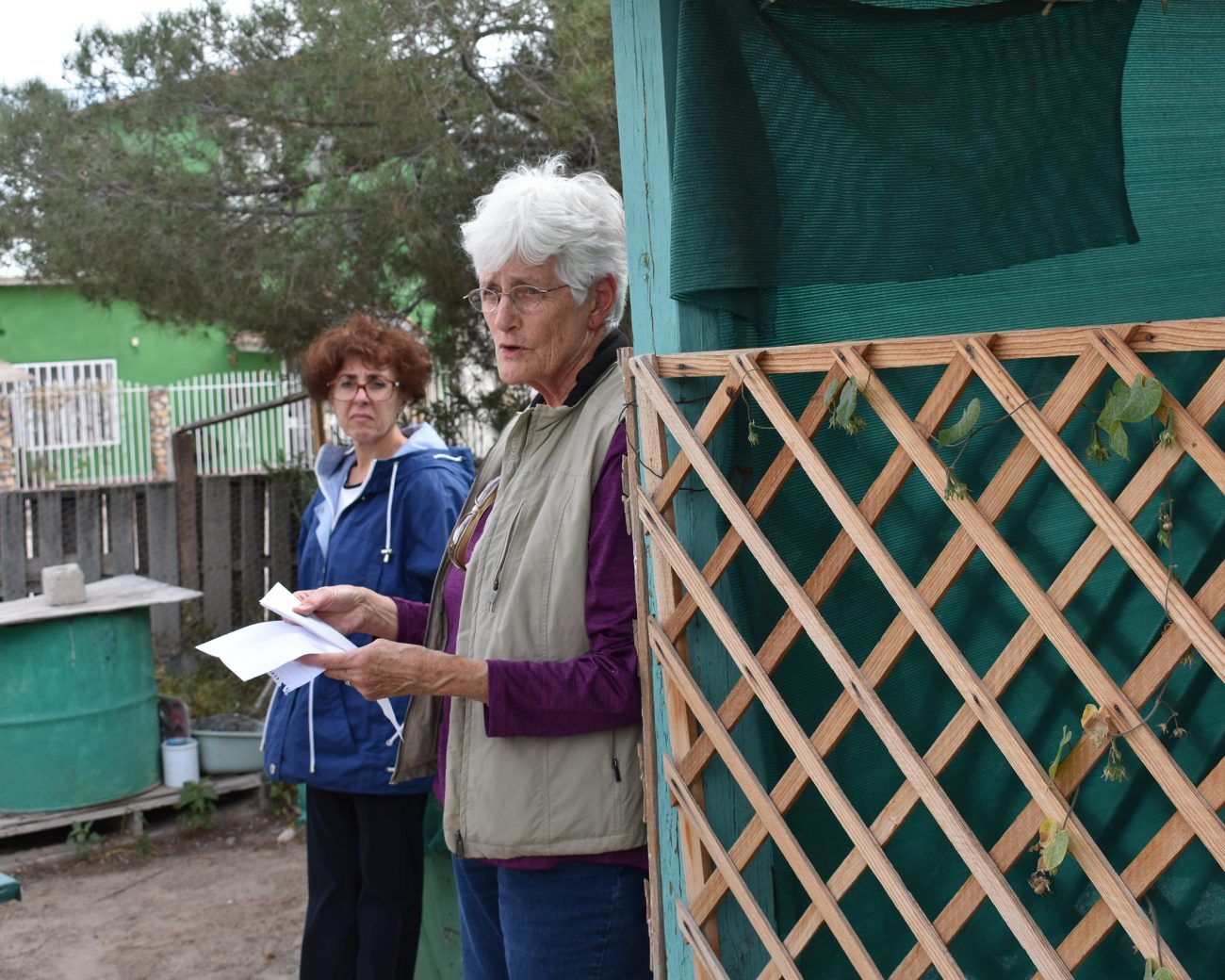 Mercy Sister Kathleen Erickson, in foreground, is seen at the Tabor House in Ciudad Juarez, Mexico, in this 2017 file photo. Since 2010 she has helped the immigrant community understand their rights under U.S. immigration law. (CNS photo/courtesy Sisters of Mercy of the Americas)

A native of Springfield, Missouri, Sister Welsh is one of three Sisters of Mercy of the Americas remaining in Laredo. But the sisters have been joined by associates of the order and co-workers who adhere to the congregation’s view of the importance that they carry out a ministry of presence in line with Pope Francis’ vision for the global Catholic Church.

The Sisters of Mercy have focused their ministries on five critical concerns: Earth, immigration, nonviolence, racism and women.

“You come to Laredo and they all come together,” Sister Welsh said.

Elsewhere in the U.S., Mercy Sisters strive to meet the needs of Latino and African immigrants who are trying to adjust to life in America and achieve citizenship at a time when the federal government is making that possibility far more difficult.

In Portland, Maine, Mercy Sister Patricia Pora, 72, works with a widespread immigrant community, visiting Latinos throughout the vast state. As director of Hispanic ministry for the Diocese of Portland, she regularly travels to places such as Lewiston (50 minutes), Waterville (90 minutes) and Bangor (more than two hours one way).

She works to meet the spiritual and the material needs of migrants.

Like elsewhere, Latino immigrants keep a low profile in Maine because they fear immigration agents will take them into custody and begin deportation proceedings, said Sister Pora, who was born in the U.S. but spent much of her childhood in Peru and Chile before returning north with her family at age 16.

Stories like the one about the young man who was returned to his home country only to be killed on arrival send fears through immigrant communities, she explained.

“Most of (the immigrants) are very peaceful. They don’t want to get into any trouble. They are trying to comply with the laws,” Sister Pora said.

However, that can be difficult, especially when it comes to court hearings and the filing of the proper forms on the road to seeking asylum. Sister Pora often finds herself navigating the legal proceedings, making sure paperwork is filed on time and accompanying people to hearings in Boston. 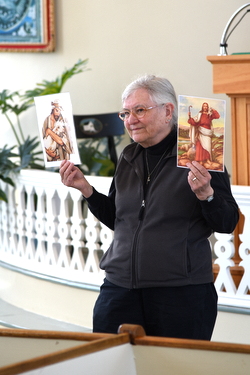 Mercy Sister Patricia Pora, director of Hispanic ministry for the Diocese of Portland, provides religious instruction at St. Michael Church in Cherryfield, Maine. She works to meet the spiritual and the material needs of migrants. (CNS photo/courtesy The Harvest)

“It’s amazing how they keep their faith in the heat of all of this,” Sister Pora said. “They try not to live in fear.”

In the center of the country in Omaha, Nebraska, Mercy Sister Kathleen Erickson has worked with Latino immigrants for years. Since 2010, she has been involved in an accompaniment program at the Douglas County Jail, where immigrants facing deportation are being held.

While the numbers have declined because construction on a new jail is underway, Sister Erickson and others in the community are helping immigrant families understand their rights under U.S. immigration law.

But there’s another equally important part of her ministry, she said.

“The other thing I try to do is raise awareness of the situation of immigrants. I have thought for years that raising awareness and getting what’s happening out into the public is very, very important,” the North Dakota native told CNS.

One step since last summer has been a weekly witness on Thursdays involving sisters living in the congregation’s retirement center in Omaha and others holding banners to passing traffic that show pictures of children detained by U.S. immigration agents along the southern border. The group has grown to 40 people since the start, weather-permitting.

In December, Sister Erickson, 78, spent three weeks in Ciudad Juarez, Mexico, across the border from El Paso. She visited Mercy Sister Betty Campbell at Tabor House and at the church-run Casa del Migrante (House of Migrants) to hear the stories of people who have been blocked from entering the U.S.

Her plan is to share their stories back in Omaha and elsewhere.

Sister Erickson had worked in ministry to migrants from 1990 to 2009 in New Mexico, not far from El Paso. She said she found the situation far more desperate today than during those earlier years.

“I think we need to begin looking at the root causes of migration and what has happened in Latin America and other countries that is the result of the United States’ and other countries’ policies and corporate practices,” Sister Erickson said.

As an example, she explained how Sister Campbell has seen handbills seeking to recruit workers for an American automobile manufacturer offering pay of about $50 a week, far below the wages in U.S. factories.

In Omaha, Sister Erickson has seen some fruits of the awareness taking root.

“People are beginning to say, ‘What can we do?’ It’s time to go beyond sending donations, although donations are important. The message has got to go to elected officials that this (detention and mistreatment of immigrants) is a disgrace. We do see that this is beginning to make a difference.”