BROOKLYN, N.Y. (CNS) — Cardinal Timothy M. Dolan of New York and Bishop Nicholas DiMarzio of Brooklyn joined about 25,000 New Yorkers who took to the streets for a Jan. 5 “Solidarity March” in protest of anti-Semitism.

The march, which made its way from Lower Manhattan to Cadman Plaza in Downtown Brooklyn, brought together Jewish and non-Jewish residents alike from the New York area, along with a host of local leaders, including Gov. Andrew Cuomo, Sen. Chuck Schumer, Mayor Bill DeBlasio, and Rep. Alexandria Ocasio-Cortez — all marching under the banner of “No Hate, No Fear.”

The march was organized by the Anti-Defamation League, the American Jewish Committee and the interdenominational New York Board of Rabbis.

Bishop DiMarzio told the crowd it was a terrible thing that those who wear religious garb “are singled out for hatred or violence.”

“We cannot let that happen in this great United States of ours. We cannot stand by and not do something,” he said. The bishop also pledged to do all he could to “change minds and hearts within our communities so that we can truly stand together against any hatred, especially any anti-Semitism and its roots.”

In his remarks, Cardinal Dolan drew from the words of St. John Paul II, who often referred to the Jews as “our elder brothers and sisters in the faith,” meaning “we are one family.”

“We are united as we acknowledge that this dismal, scary hatred and violence that has afflicted the community we love can ultimately be solved only by a conversion of heart,” he said.

The march and rally came on the heels of a spree of anti-Semitic attacks in New York, most recently on New Year’s Day when a 22-year-old Hasidic man was beaten and subjected to hate speech in Brooklyn — the 13th known attack against Jews in the New York area in less than 10 days. 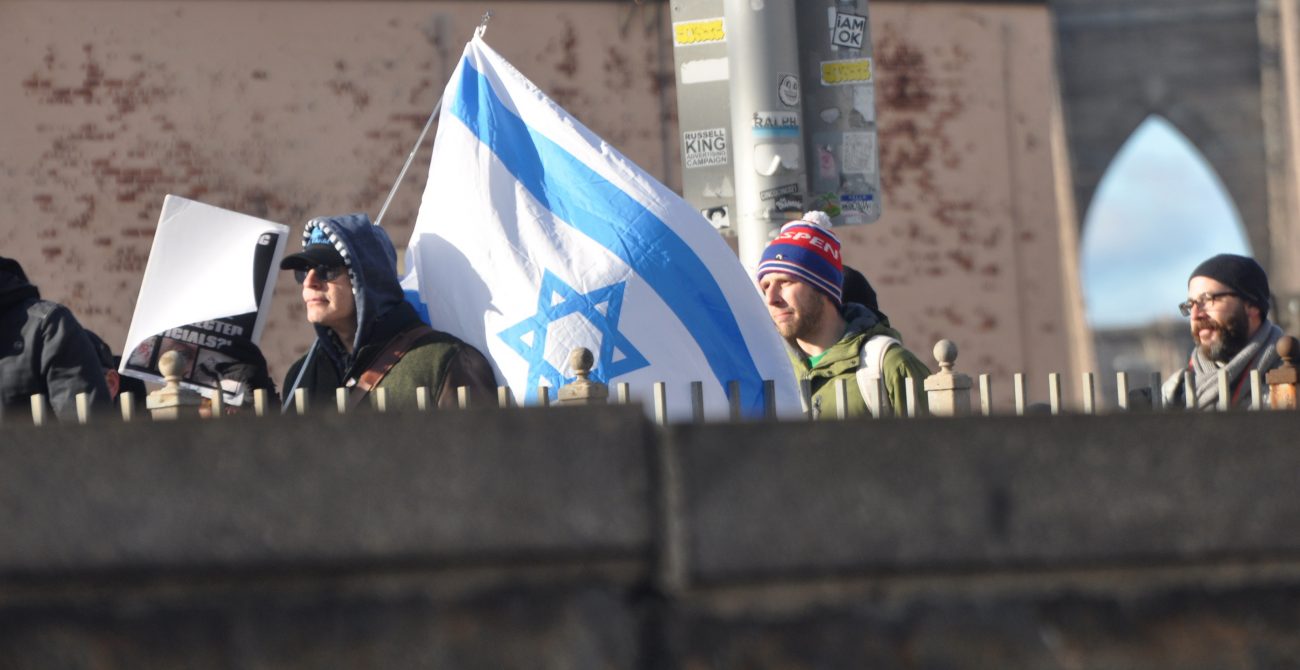 A man carries the Israeli flag as he marches across New York’s Brooklyn Bridge Jan. 5, 2020, during the massive No Hate, No Fear March from Holy Square in Manhattan to Cadman Plaza in Brooklyn. More than 25,000 marched to protest the recent outbreak of anti-Semitic incidents in the area. (CNS photo/Ed Wilkinson, The Tablet)

The violence on Jan. 1 followed the Hanukkah attack at the home of a rabbi in Monsey, where five people were stabbed in an incident that Cuomo labeled as “domestic terrorism.”

Family members of one of the victims of that attack, Josef Neumann, released a graphic photo on Jan. 1 of the father of seven children hooked up to respirators and stitched up from the multiple stab wounds he incurred. Doctors expect Neumann to be permanently paralyzed and are unsure if he will ever regain consciousness.

In response to the heinous attack, Bishop DiMarzio said: “Hate like this has no place in a civil society.

“Today we are reminded it is better to light one candle than to curse the darkness. Let us be that light as we pray for peace and practice tolerance today and always,” Bishop DiMarzio continued in a statement.

Bishop DiMarzio and Cardinal Dolan joined more than 130 faith leaders from across the state, in condemning the attack.

“Anti-Semitism, bigotry and hate of any kind are repugnant to our values and will not be tolerated in our state,” they said. “An attack against one of us is an attack against all of us. Together we will continue fighting hate and intolerance with love and inclusion.”

The attacks in New York come at a time when people of faith are facing increased violence at houses of worship across the nation.

According to the latest data from the Federal Bureau of Investigations, hate crimes in churches, synagogues, temples and mosques rose 34.8 percent between 2014 and 2018.

On Dec. 29, in Texas, a gunman fatally shot two churchgoers at West Freeway Church of Christ in White Settlement, before he was killed by a security guard on-site.

The past year proved particularly deadly for people of all faiths across the globe. Incidents included the Easter Day massacres in Sri Lanka that killed more than 250 people and attacks at two mosques in Christchurch, New Zealand, last March that killed 51 individuals.

New York has ramped up security around houses of worship, and the governor has ordered increased patrolling in Orthodox Jewish neighborhoods throughout the state.

At the Jan. 5 rally, Cuomo said that the gathering was a “remarkable show of love and solidarity.”

“That’s New York at its best,” he said of the crowd on hand, adding that the violent incidents have been “attacks on every New Yorker.”

White is a national correspondent for The Tablet, diocesan newspaper of Brooklyn.

NEXT: Migrants benefit from Mercy Sisters’ ministry of presence