Morality of drone warfare questioned after attack on Iranian general 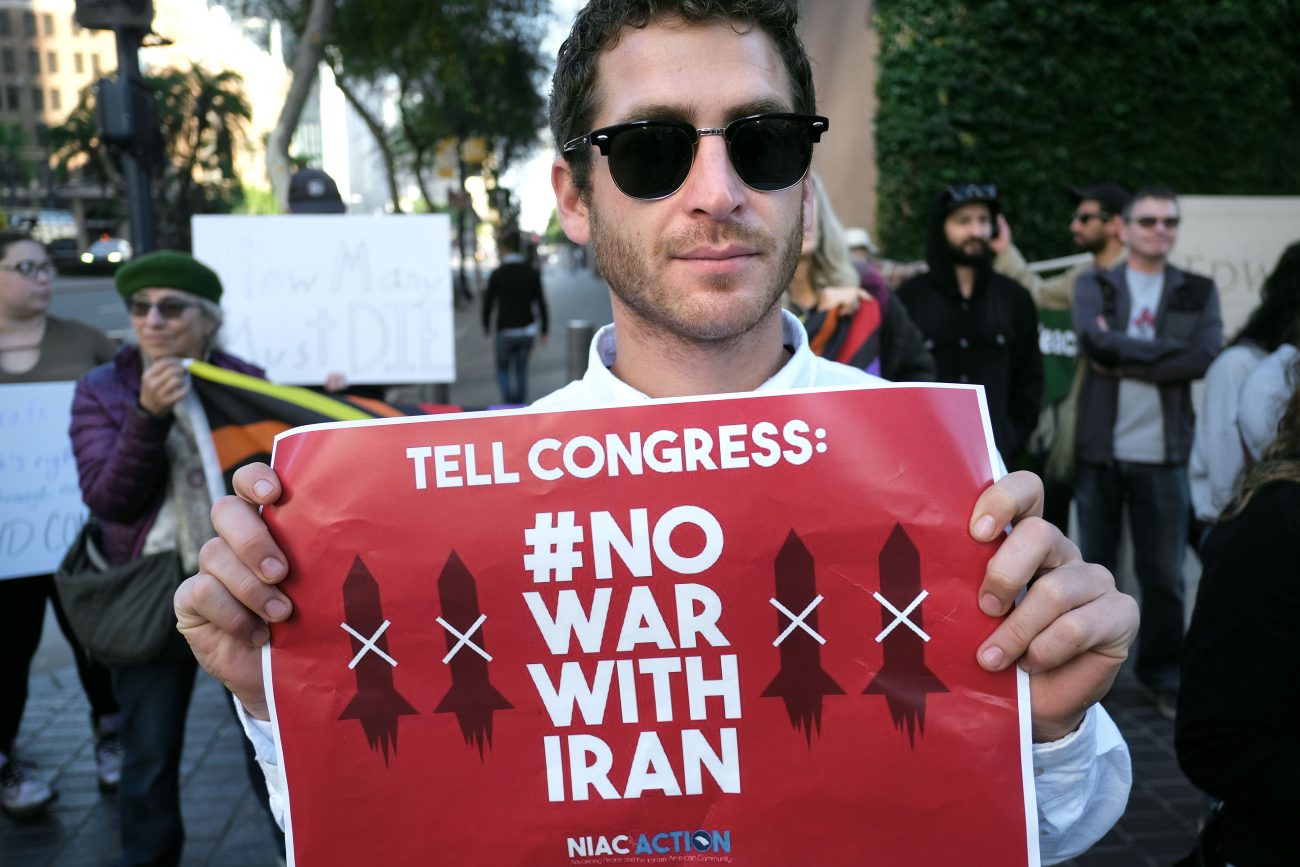 A man participates in a rally Dec. 4, 2020, in San Diego to protest after Iranian Maj. Gen. Qassem Soleimani was killed in a U.S. drone airstrike at Baghdad International Airport the previous day. (CNS photo/David Maung)

It wasn’t an unusual request from a church leader. Still, its significance stems from its context and its timing: a few hours after the overnight killing of Iran’s top military leader, Maj. Gen. Qassem Soleimani, in a U.S. drone strike in Baghdad.

“Welcome to the new year!” Bishop Stika wrote. “Congress and the President are playing with the emotions of the people of this nation. A divisive election year. North Korea is watching all this and now the assassination of the number 2 man in Iran. Prayers for the world during this time of unrest.”

Bishop Stika told Catholic News Service Jan. 6 that his tweet reflected a deep concern for uncertainty in today’s world, especially as tensions rise between the U.S. and Iran.

“It just seems it could spark something and that it could be very difficult to control the aftermath,” he said.

“I think about all of the individuals I have known who have been harshly affect by being in wars. The PTSD (post-traumatic stress disorder), lost limbs, trauma,” the bishop continued. “It concerns me it could be a dangerous thing. The uncertainty of this could blossom into something that could become horrific.”

Bishop Stika is not alone.

Catholics working to shape public policy in favor of peace, collaboration and nonviolent alternatives to war expressed concerns that the drone strike likely will fuel an escalating tit-for-tat series of responses that would engulf the Middle East in war.

They instead called for a new round of diplomacy to resolve the differences between the two nations and protect innocent civilians, particularly religious minorities.

Among those calling for a diplomatic solution were the Sisters of Mercy of the Americas, who Jan. 3 called on the U.S. government to “reject violence and militarism.”

“Our position would still be that international cooperation is the only way to be in the world. Violence begets violence,” said Jean Stokan, coordinator of nonviolence and immigration of the Sisters of Mercy’s Institute Justice Team.

“The problem with these strikes is that drone strikes are expanding war, not limiting war,” said Maryann Cusimano Love, associate professor of international relations at The Catholic University of America.

Drone attacks also can “lead to a very short-term mind frame, that you can try to target a particular person without taking those long-term considerations about how this is going to build a positive, sustainable peace and protect the most vulnerable people,” she said.

Johnny Zokovitch, executive director of Pax Christi USA, said drone attacks offer “no accountability, no sense of responsibility” in violation of church teaching on war and peace. He said the killing of Soleimani as approved by President Donald Trump “further contributes to the cycle of revenge and innocent men, women and children will suffer.”

Under the Catholic Church’s long-standing just war teaching, Love explained, an act of war “has to be the right intention, made by public authority, a positive intention to build a positive peace, that the harms from the action won’t outweigh the harms that come from the action and there must be protections for civilians.”

“All of that is called into question under drone warfare,” she said.

At the same time, Love added, the immediacy of attacking a target by drones in warfare “takes away from civilians the only means of protection they have, which is running away.”

At the same time, she said, just peace is violated because using drones does not allow for the ability to involve the people most impacted in dialogue, fails to build right relationships and does not lead to sustainable peace.

Stephen Schneck, executive director of the Franciscan Action Network, said he expects that violent retaliation eventually will be carried out by “Iran and its allied groups against Americans and U.S. interests.”

The U.S. Conference of Catholic Bishops for more than a decade has raised questions about the morality of drone warfare. In a pair of June 2018 presentations to the Interfaith Conference on Drone Warfare in Chicago, retired Bishop Richard E. Pates of Des Moines, Iowa, cited numerous reasons for concern.

Specifically, he pointed to the rapid growth in drone technology without adequate guidelines for their usage, the possibility of collateral damage, the disparity in the risk between the target and the remote operator and the possible lowering of the bar to use armed force.

He said armed drones are “changing the nature of warfare,” requiring the bishops to raise moral concerns in order to protect human life.

“We owe it to ourselves to keep asking the questions on the moral gravity involved in using drones for targeted killings. … The use of attack drones in target killings should be inseparable from the question of whether it promotes peace and security around the world,” he said.

As for U.S. relations with Iran, Archbishop Timothy P. Broglio of the U.S. Archdiocese of the Military Services, in June called on the Trump administration to seek “sustained dialogue” to resolve its differences with the Iranian government.

In letter to Secretary of State Mike Pompeo, the archbishop, then the chairman of the bishops’ Committee on International Justice and Peace, called for “a different approach” in order to head off war.

The committee’s new chairman, Bishop David J. Malloy of Rockford, Illinois, cited Archbishop Broglio’s letter in a brief statement Jan. 3 after Soleimani’s killing: “We raised our concern over the escalating tensions between the United States and Iran last summer which has only grown. Just passing the 53rd World Day of Peace, the church continues to pray for peace in our world, including a just and peaceful resolution to these growing hostilities between our two countries.”

NEXT: Catholic leaders join New Yorkers in march against hate