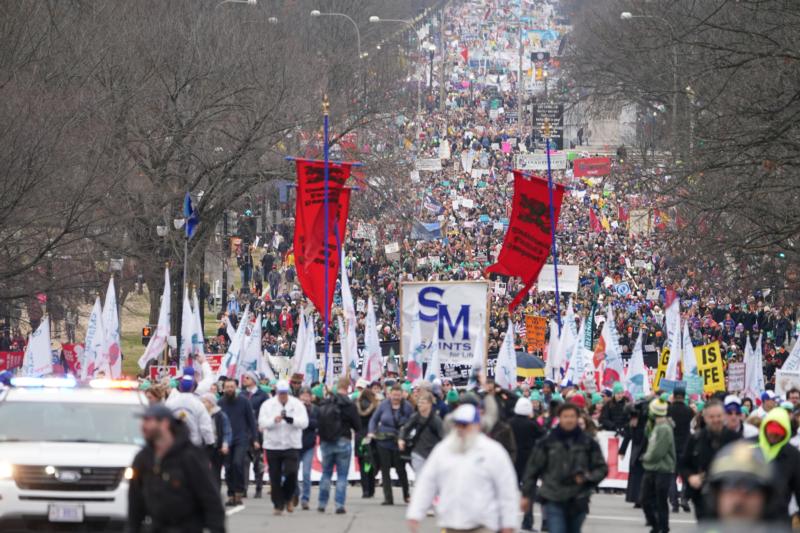 WASHINGTON (CNS) — What you don’t comprehend about the marching portion of the March for Life until you’re in it is, even though it appears somewhat unorganized at the start, is that it’s an intensely polite and orderly experience despite its immense size.

For many participants, it’s a pilgrimage. There are no raised voices, there are occasional chants from student groups, it moves very slowly — a brisk walking pace would seem like a sprint — and there appear to be as many thousands of people lining the sidewalks as there are on the street.

The throng at the pre-march rally on the National Mall doesn’t give a true sense of the sheer bigness of the march itself. Many groups, all with placards, join it midway through, and quite a few others, rather than try to squeeze in on the street, accompany it on the sidewalks.

This year, the scheduled 1 p.m. start was delayed for 50 minutes as police cleared away barriers in place as part of the security for President Donald Trump’s address at the Jan. 24 March for Life rally.

At 1 p.m., though, an immense cheer went up from the marchers waiting at the corner of Constitution Avenue and Ninth Street NW as they spotted someone on a balcony near the top floor of the Justice Department building. 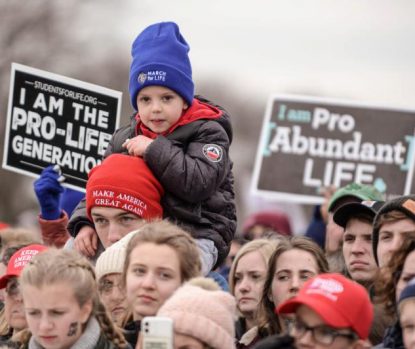 Pro-life supporters rally on the National Mall prior to the 47th annual March for Life in Washington Jan. 24, 2020. (CNS photo//Mary Calvert, Reuters)

It was Attorney General William Barr, standing impassively, and without an overcoat. He continued to receive intermittent cheers, never waving in return, for the next 30 minutes before he went inside.

No one tells the groups how to assemble. They just quietly line up. A handful of Knights of Columbus kept the front of the march somewhat tidy with rope barriers as they cleared spectators back to the sidewalks, but no one announced an order to begin. The police squad cars started to roll, there was a mighty whoop, and the walk to the Supreme Court was underway.

Anne-Marie Rimback of Laytonsville, Maryland, attended with her son Adam. She used to attend marches in the 1980s when she was in high school, and felt inspired to return after watching it on TV last year.

“In a society that’s so secular and anti-life on so many levels, we start to think that’s the reality,” she said in an interview with Catholic News Service. “That’s not the message of the younger generation, which really is the future.”

LaVonne Vogt, who had driven from Wilmington, North Carolina, with her husband, Bob, was marching for the second straight year, and marveled at the calm she sensed.

It was the first year for Drew Timmermeier, a freshman at Southern Illinois University in Edwardsville, who was part of a delegation of just over 300 representing the Diocese of Springfield, Illinois.

“People just know there was a calling to come together,” he said of the march. “It was a simple message.”

Asked about Trump’s appearance at the rally, he said, “Politics doesn’t matter to me. As long as abortion is legal, we’ll still be here.”

NEXT: Bryant relied on Catholic faith to cope in tough times