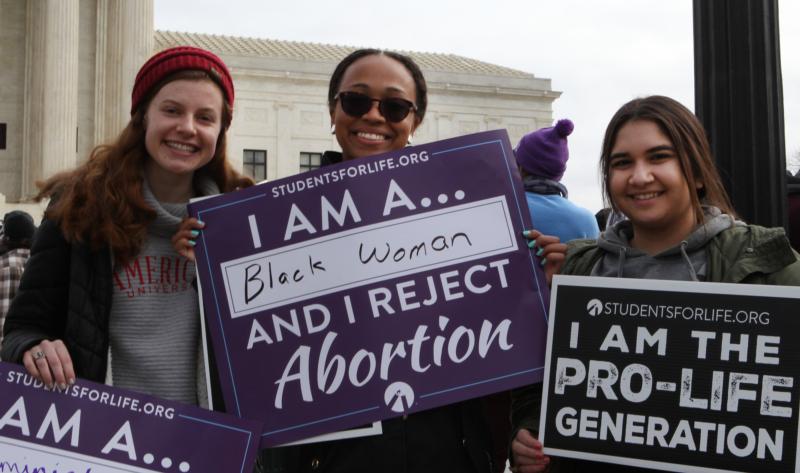 Hannah Andrews, Shideya Parrilla and Maria Goitiandia, Catholic members of the new Students for Life group at American University in Washington, stand outside the Supreme Court before the annual March for Life in Washington Jan. 24, 2020. The students said they wanted to provide a counter voice to the protesters who had gathered there the morning of the march. (CNS photo/Carol Zimmermann)

WASHINGTON (CNS) — Before they were joined by thousands of marchers Jan. 24 in front of the Supreme Court, dozens of people on both sides of the abortion debate shared the same sidewalk and chanted conflicting slogans while holding up signs reflecting opposing points of view.

Some who gathered to join the massive protest marking the anniversary of the 1973 Roe v. Wade decision that legalized abortion led a few dozen in prayer just in front of blocked off and police-guarded steps to the Supreme Court.

The group recited prayers and read Scripture passages and sang with guitar accompaniment under cloudy skies while counter-protesters made noises and waves signs in front of them that asked where the “pro-life hypocrites” were during recent events such as the climate change rallies, protests against hate rallies or against President Donald Trump’s “Muslim ban,” blocking travelers to the U.S. from some Muslim countries.

Amid the repeated bullhorn sounds and chants, the group continued praying. When they were finished, a speaker said: “We will keep coming back; we won’t go away.”

“There’s too much yelling. No one’s listening to each other, ” one man passing by said to the woman he was walking with after taking a picture of the scene.

Right in front of the street, just beside the counter-protesters with signs saying the court’s Roe decision should stay, a group of students from Students for Life of America held signs that said: “I am the pro-life generation” or placards with specific reasons for their pro-life beliefs such as: “I am a black woman and I reject abortion” or “I am a feminist and I reject abortion.”

“People think the pro-life cause is old white men. It’s not; it’s youth and I think it’s important to say abortion is not empowering us, it’s oppressing us,” said Maria Goitiandia, a junior at American University in Washington, who attended Mass on campus before coming to the Supreme Court more than an hour before the marchers would descend on the street.

She said joined other students at the court before the marchers came in order to provide a “counter voice” to those who support laws legalizing abortion.

Shideya Parrilla, a recent graduate of American University from the Virgin Islands, said one of the protesters “started educating me” about abortion which didn’t go over with her. They talked a little, but it didn’t go far.

Similarly, a protester from West Virginia holding the sign “impeach abortion” said it was hard to talk over the bullhorns and shouting but she was determined to take a stand not only against abortion but in support of all the others, especially young people, who similarly “stand for life.”

Three women standing several feet away from the mini-rally that had formed in front of the Supreme Court, held signs that said: “I regret my abortion.” They said the demonstrators supporting legal abortion were a small but loud group who would soon be overtaken by thousands of marchers.

The women, two from Charlotte, North Carolina, and one from Portland, Oregon, had been to marches before and chose this year to get to the court early to greet marchers with their signs as they arrived.

They stood next to a tree in winter coats on the cool, but not freezing day like some past march days, saying it was important to be there simply to witness to the healing they experienced decades after they had abortions.

For these women, being at the march is not about shouting, cheering or even changing minds, it is about making people realize that there is another side to issue.

Andrea Hines, from Charlotte, told Catholic News Service she never thought she would tell anyone about her abortion, but she sought help more than 20 years after her abortion and learned that it is possible to find healing and personal forgiveness.

She has always received a lot of love and support at the March for Life. She said in previous years, she has had men tell her: “me too” in response to the poster she has held saying she regrets her abortion.

She said young people in the crowd also have thanked her for what she was doing to which she has responded: “It’s in your hands now,” about the pro-life movement.

NEXT: Peaceful spirit of pro-life marchers ‘quite amazing,’ says participant