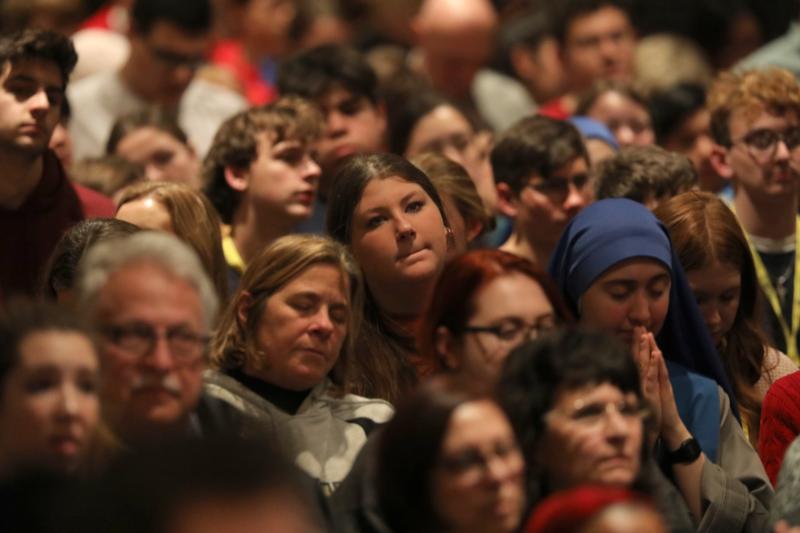 An overflow crowd is seen outside the crypt church of the Basilica of the National Shrine of the Immaculate Conception in Washington during the opening Mass of the National Prayer Vigil for Life Jan. 23, 2020. The Mass was upstairs, in the main basilica. (CNS photo/Bob Roller)

WASHINGTON (CNS) — Pope Francis “has our backs” in the pro-life cause, Archbishop Joseph F. Naumann of Kansas City, Kansas, said to applause in his Jan. 23 homily at the opening Mass of the National Vigil for Life.

During an “ad limina” meeting with bishops from Kansas, Missouri, Iowa and Nebraska the week before, Archbishop Naumann said Pope Francis had told them, “If we do not defend life, no other rights matter.”

“The Holy Father said that abortion is first a human rights issue,” added Archbishop Naumann in his homily, delivered at the Basilica of the National Shrine of the Immaculate Conception in Washington.

“Pope Francis was aware of the March for Life in the United States and was delighted to know the anticipated large numbers of pilgrims, especially the participation of so many young people,” said Archbishop Naumann, who is chairman of the U.S. Conference of Catholic Bishops’ Committee on Pro-Life Activities.

Although the “ad limina” meeting was confidential so that the pope and the bishops could speak freely, Pope Francis “encouraged me — I dare say, ordered me — ‘Please tell the pilgrims at the March for Life and the entire pro-life community: The pope is with you! He is praying for you!'” the archbishop said. 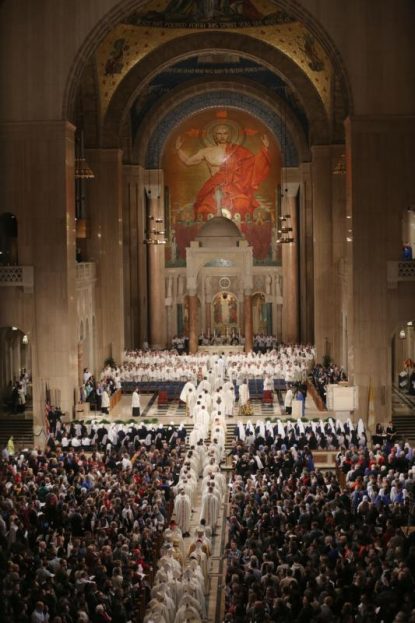 Prelates and clergymen process during the opening Mass of the National Prayer Vigil for Life Jan. 23, 2020, at the Basilica of the National Shrine of the Immaculate Conception in Washington. (CNS photo/Bob Roller)

“God and 14 other bishops are my witnesses that Pope Francis was passionate in support of the church’s pro-life efforts. The successor of Peter has our backs.”

Archbishop Naumann dwelt mainly in his homily on what he called a “moral ‘Twilight Zone,'” based on an episode of the old television science-fiction series in which surgeons worked time and again to repair a young woman’s disfigured face through plastic surgery. After the final operation, he recalled, the bandages were removed from the woman’s face and she is “stunningly, drop-dead beautiful.”

Surprisingly, the surgical team apologizes for their failure. “They remove their own surgical masks revealing their own grotesquely hideous appearance,” Archbishop Naumann said. “You begin to realize that in this fictional ‘Twilight Zone’ world, beautiful is ugly and the hideous is gorgeous.”

Such it is with abortion in American society, he asserted. “The killing of one’s child is exalted as heroic and brave,” he said. “Abortion was described by early feminists Susan B. Anthony and Alice Paul as the ultimate exploitation of women, but in this ethically topsy-turvy twilight zone, it is now hailed as the cornerstone of women’s rights.”

He told the worshippers, estimated at 10,000, inside the basilica, “Jesus never promised that discipleship would be easy. He told his first disciples that in order to follow him they must be willing to take up their cross.”

Archbishop Naumann added, “In this cultural, moral twilight zone to stand for the sanctity of the lives of unborn children, you may face ridicule and social exclusion. You may be penalized in the academy and workplace.”

But he cited “signs of hope,” garnering applause when he talked about “our nation’s youth being more pro-life than their parents.” Archbishop Naumann said, “There is also reason to hope the United States Supreme Court, which imposed by judicial fiat our current liberal abortion policy, may be poised to return to states a greater ability to protect the lives of unborn children” through the reversal of Roe v. Wade, the 1973 decision that allowed legal abortion virtually on demand.

Archbishop Naumann also heralded the 25th anniversary of St. John Paul II’s encyclical “The Gospel of Life,” St. John Paul “did not make reference to any ‘Twilight Zone’ episodes,” he noted, but he said in the encyclical, “When conscience, this bright lamp of the soul, calls evil good and good evil, it is already on the path to the most alarming corruption and the darkest moral blindness.”

“Freedom separated from truth,” Archbishop Naumann warned, “in the end creates a tyrant state that allows and even encourages the disposal of life when it is weakest.” 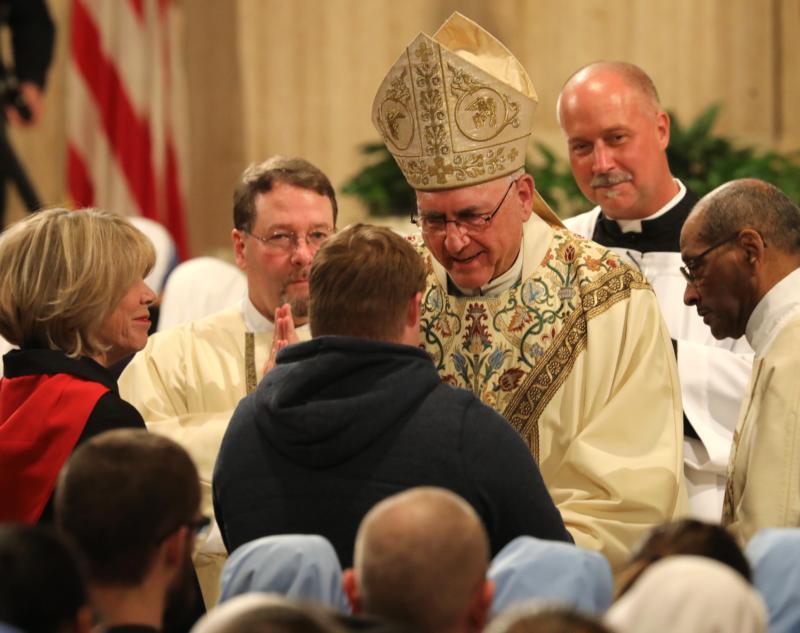 Archbishop Joseph F. Naumann of Kansas City, Kan., chairman of the U.S. bishops’ Committee on Pro-Life Activities, accepts the offertory gifts during the opening Mass of the National Prayer Vigil for Life Jan. 23, 2020, at the Basilica of the National Shrine of the Immaculate Conception in Washington. (CNS photo/Bob Roller)

NEXT: Youthful crowd seen as sign march is a hit with the young