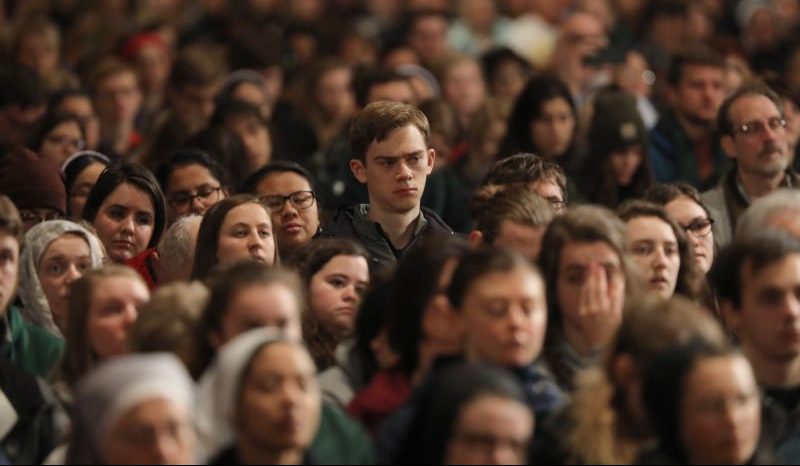 A young man is seen among thousands of pro-life advocates during the closing Mass of the National Prayer Vigil for Life Jan. 24, 2020, at the Basilica of the National Shrine of the Immaculate Conception in Washington. (CNS photo/Bob Roller)

WASHINGTON (CNS) — Taking part in the March for Life is “an authentic act of patriotism,” Archbishop Timothy P. Broglio, head of the U.S. Archdiocese for the Military Services, told 5,000 worshipers Jan. 24 in his homily for the closing Mass of the National Vigil for Life.

“Today you and I render a service to the nation we love in an authentic act of patriotism, because we march to attest to the dignity of the human person and the duty of the state to protect and foster that dignity,” Archbishop Broglio said. “It is an innate dignity, because the human person is created in the image and likeness of God.”

The issues of faith and politics are brought into sharp relief by the Mass’ Gospel passage, in which Jesus instructs Pharisees and Herodians who are out to trap him, “Repay to Caesar what is Caesar’s, and repay to God what is God’s.”

“What is the relationship between faith and the political life? What is the role of the church in civil society? Can we as the body of Christ address the problems of everyday life?” Archbishop Broglio asked. “Why does the bishop of Rome send representatives to some 183 nations throughout the world — including our own?”

“The questions are valid,” he acknowledged. “Every time a bishop or a priest speaks about social justice, we can hear a similar refrain: They are interfering in the political system or attempting to force creedal values in the public sphere.” 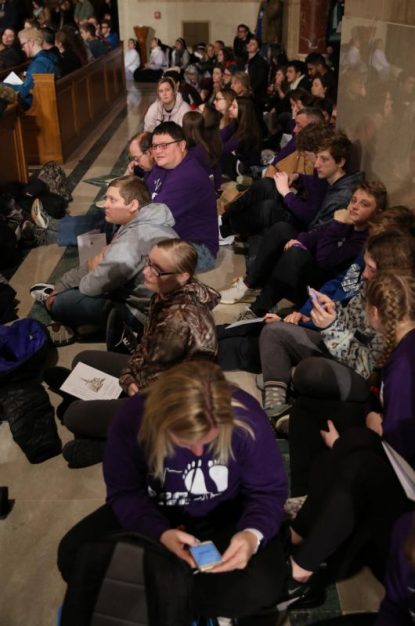 Pilgrims fill the aisle during the closing Mass of the National Prayer Vigil for Life Jan. 24, 2020, at the Basilica of the National Shrine of the Immaculate Conception in Washington. (CNS photo/Bob Roller)

Still, “let us remember that the believer is charged to be the leaven of the Gospel in our world,” Archbishop Broglio said at the Mass, which had the theme “For the Preservation of Peace and Justice.”

“At the end of the day when we examine our conscience, we want to be certain that we have given to God what is his. He has placed a law in our hearts and we believe that this natural law must also have its place in our civil society.”

Archbishop Broglio said, “Giving to Caesar and to God is not quite as simple as it seems, because our lives are not lived in compartments, but are intermingled in many aspects.” He added, “Let us accept, then, as free women and men, the political commitments which are born from the very mission entrusted by God to the human person.”

Those moments, he noted, may come along the march route should supporters of legal abortion counter the message of March for Life participants.

“Yes, we march to protect the unborn and the aged, but our demonstration of the dignity of the human person extends beyond a single day or a single issue,” Archbishop Broglio said. “When you and I treat another with respect — even if we disagree — we witness to that person’s dignity.”

During the last general intercession of the Mass and Archbishop Broglio’s prayer following it, a man began shouting from the back of the basilica, although what he said was having trouble being heard over the amplified voices praying from the sanctuary. The disruption stopped before Archbishop Broglio’s prayer had concluded, but the fate of the man doing the shouting could not immediately be determined. 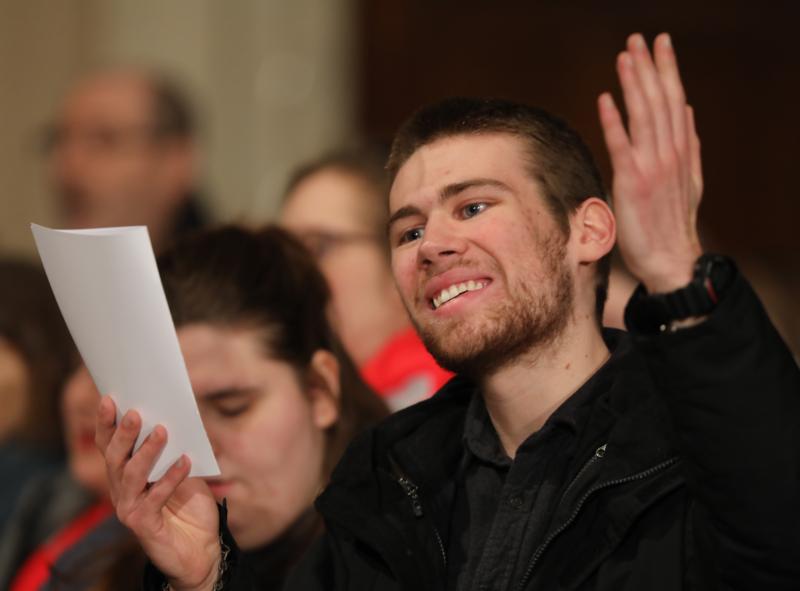 A young man sings during the closing Mass of the National Prayer Vigil for Life Jan. 24, 2020, at the Basilica of the National Shrine of the Immaculate Conception in Washington. (CNS photo/Bob Roller)

PREVIOUS: Pro-life leaders urged to continue to use their gifts for ‘Gospel of Life’

NEXT: Pope Francis ‘has our backs’ on pro-life cause, says archbishop