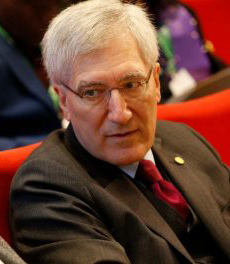 Robert George, a professor at Princeton University in New Jersey, is shown in this 2018 file photo. (CNS photo/Paul Haring)

Robert P. George, Princeton University’s McCormick professor of jurisprudence and a former chairman of the U.S. Commission on International Religious Freedom, spoke at a forum on the religious formation of “America’s rising generation” with Orthodox Rabbi Meir Soloveichik, one of his former students. The event was sponsored by the Tikvah Foundation in partnership with the Museum of the Bible.

Sounding one of his familiar themes from his books and lectures, George observed, “There is an antipathy, sometimes an open hostility to religion. Many institutions — even those identified with a faith — are suspicious, if not hostile.”

He cited the matter of scholar Anthony Esolen, who in 2017 left the Dominican-run Providence College in Rhode Island after a long debate about diversity and the college’s future. Matters came to a head in 2016 after Esolen published an essay in Crisis Magazine titled, “My College Succumbed to the Totalitarian Diversity Cult.”

Esolen wrote, “Is not that same call for diversity, when Catholics are doing the calling, a surrender of the church to a political movement which is, for all its talk, a push for homogeneity, so that all the world will look not like the many-cultured church, but rather like the monotone nonculture of Western cities that have lost their faith in the transcendent and unifying God?”

He added that he’d noted under college policy, “we are supposed to commit ourselves to welcoming the alphabet soup of cheered-on sexual proclivities. For some reason that does not include ‘F,’ for fornicators, or ‘S, for swingers, or ‘P,’ for pornographers, or ‘W,’ for sex workers, formerly called harlots, or ‘A,’ for adulterers.”

A faculty petition accused Esolen’s articles of containing “racist, xenophobic, misogynist, homophobic and religiously chauvinist statements.” After leaving Providence, Esolen took a new post at Thomas More College of Liberal Arts in New Hampshire, from which he resigned last year. He is now on the faculty and a writer-in-residence at Magdalen College of the Liberal Arts, which also is in New Hampshire.

Even at Catholic universities, George observed, “there is a profound ignorance, and often animosity to, faith.” He called secular progressivism “a competing faith which has gained dominance, or what our friends on the left would call a hegemony.”

Further, he described it as “not an ideology that in practice welcomes the presence of competing viewpoints,” and it operates “very much like a religion, with holidays, saints and its own eschatology.”

Devout Catholics, he added, “want to hear viewpoints outside their own faith,” including from Jewish and Protestant thinkers, and this can be possible at any Catholic institution of higher learning. “It’s just that there’s a spirit of openness and an understanding that there are things to be learned from all faith traditions.”

Rabbi Soloveichik, who teaches at Yeshiva University in New York, attacked the theory of intersectionality, often used to identify discrimination against women, “which proclaims a culture of victimhood.”

Under interpretations of intersectionality, he said, “Jews are excluded,” and “Israel has been prejudged as an outpost of Western colonialism.”

“The truest threat to people of faith in the modern university, from my perspective … is the culture of hedonism as part of student life. Ultimately, it’s not what is happening in the life of the mind, but in the life of the soul.”

He also bemoaned that “openly traditional religious” on campuses are viewed “as relics, and not just as relics, but bigoted relics.”

As bulwarks for students of faith, George called for funding “good chaplaincies” and what he described as infrastructure for students of faith at secular universities “that do what the university used to,” including the promotion of free exchange of ideas and “an openness to challenges and being challenged.”

He also stressed the importance of targeting giving in higher education, describing unrestricted giving as “the devil incarnate,” since “you can be sure that they’re going to use it for something against your values, including religious values.”

NEXT: Marchers for life praise ‘great gift’ of children for future