Marchers for life praise ‘great gift’ of children for future 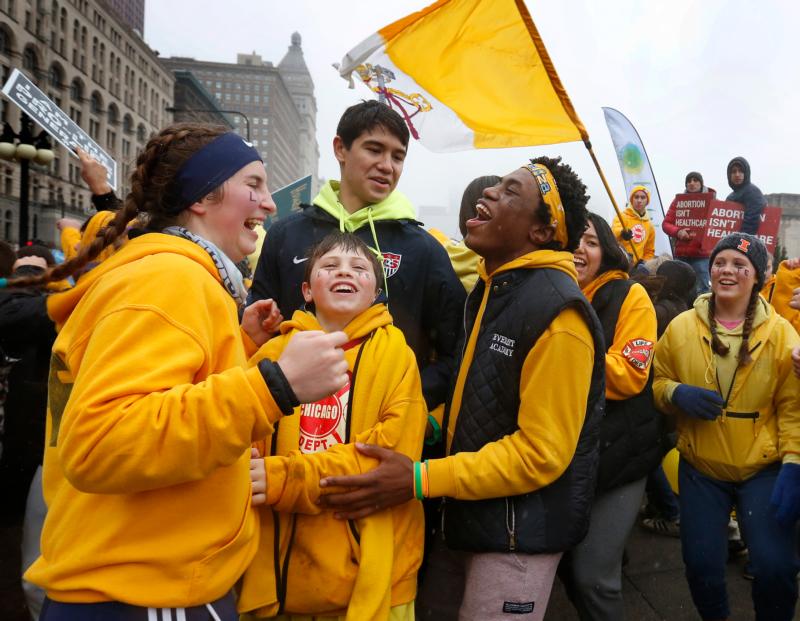 Members of the "Crusaders for Life" from St. John Cantius Parish in Chicago cheer Jan. 11, 2020, at the end of March for Life Chicago. (CNS photo/Karen Callaway, Chicago Catholic)

CHICAGO (CNS) — Despite high winds, freezing precipitation and cold temperatures, thousands turned out for the seventh annual March for Life Chicago, which kicked off in Daley Plaza Jan. 11.

The march, with the theme “Life Empowers: Pro-Life Is Pro-Woman,” proceeded east on Washington Avenue and south on Michigan Avenue, where it ended at the Congress Plaza Hotel. A youth rally hosted by the Archdiocese of Chicago took place at the hotel before the march, along with an expo of pro-life groups sponsored by WeDignify.

The “Mass for Life” was celebrated at the hotel following the march, and the evening featured a banquet and swing dance party.

“When a child is born into the world, it is a great gift, not just for the child but for a whole family, a family that sees a legacy carried on and can see in the eyes of that child the future,” Cardinal Cupich told the gathering.

Participants came from Illinois, Indiana, Michigan, Wisconsin, Iowa and Missouri. Among them was Jonathan Olesen, a sophomore at the University of Illinois at Urbana-Champaign. He came from Batavia, Illinois, for the event.

He is a member of WeDignify, the organization formerly known as Students for Life of Illinois, and was one of the people selected to carry the “March for Life Chicago” banner at the beginning of the march.

“I’m a Roman Catholic and I respect life and I really do think abortion is an evil that has come upon the country,” said Olesen, who also attended the expo prior to the march. “It wasn’t always on my radar, but it really became more apparent as I went to college and things started coming up.”

He was looking forward to leading the march with fellow college students.

“I’m nervous, but I’m excited for it. I’ve never been on a march before so this should be fun,” he told the Chicago Catholic, the archdiocesan newspaper.

In May 2019, Illinois passed legislation that permits abortion at any stage of pregnancy and for any reason. That action has recommitted many to support life at all stages, including Willows Academy senior Tess Birmingham.

“We care a lot about saving the babies. We’re unhappy with the legislation in Illinois that allows abortions, that allows this kind of thing to happen. We want to march to support life at every age and every stage,” said Birmingham, who attended with Kailey Mongoven from Arlington Heights, Illinois.

Mongoven, a freshman at St. Louis University, is involved with the pro-life group on her campus but couldn’t attend the upcoming national March for Life with them, so she wanted to show her support by attending the event in Chicago.

“Each and every single human being deserves the right to live their life, to have the opportunity to have a life and not have that taken away. We all have human dignity. That’s important to every single person no matter what,” Mongoven said.

Before the march started, Jim Holuj from Knights of Columbus Council 10926 in New Lenox, Illinois, passed signs out to participants.

Seeing all the young people at the march is “very encouraging,” the father of six said.

“That’s where it’s at,” Holuj said. “They give us the vitality to continue.”

Holuj has been involved in pro-life efforts for eight years.

“Life matters. Without that, without family, we have nothing. We need young life to continue. It’s not rocket science,” he said.

The national March for Life has been held annually in Washington since 1974 near the Jan. 22 anniversary of the U.S. Supreme Court’s Roe v. Wade decision that legalized abortion in 1973. Tens of thousands are expected to participate in the national march Jan. 24 this year. Groups from the Archdiocese of Chicago also will be in attendance. 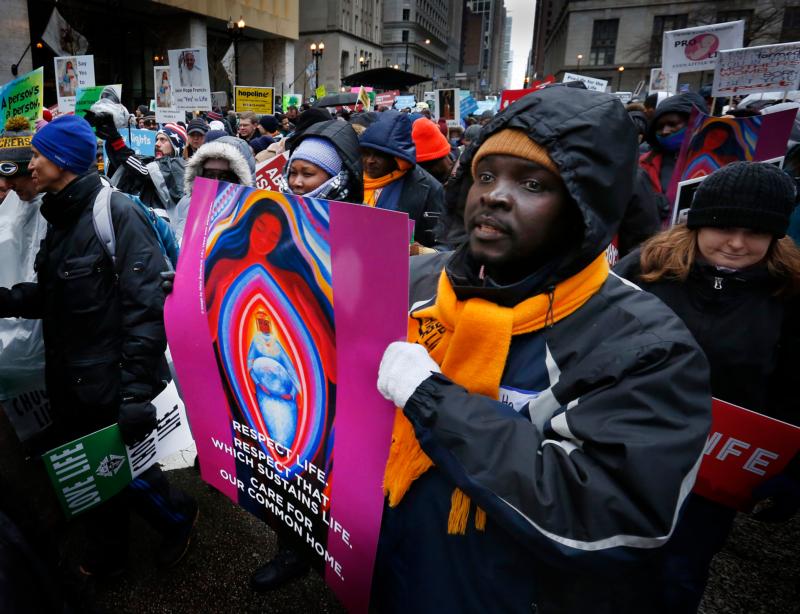 NEXT: Knights, New York Archdiocese and others providing aid to quake victims