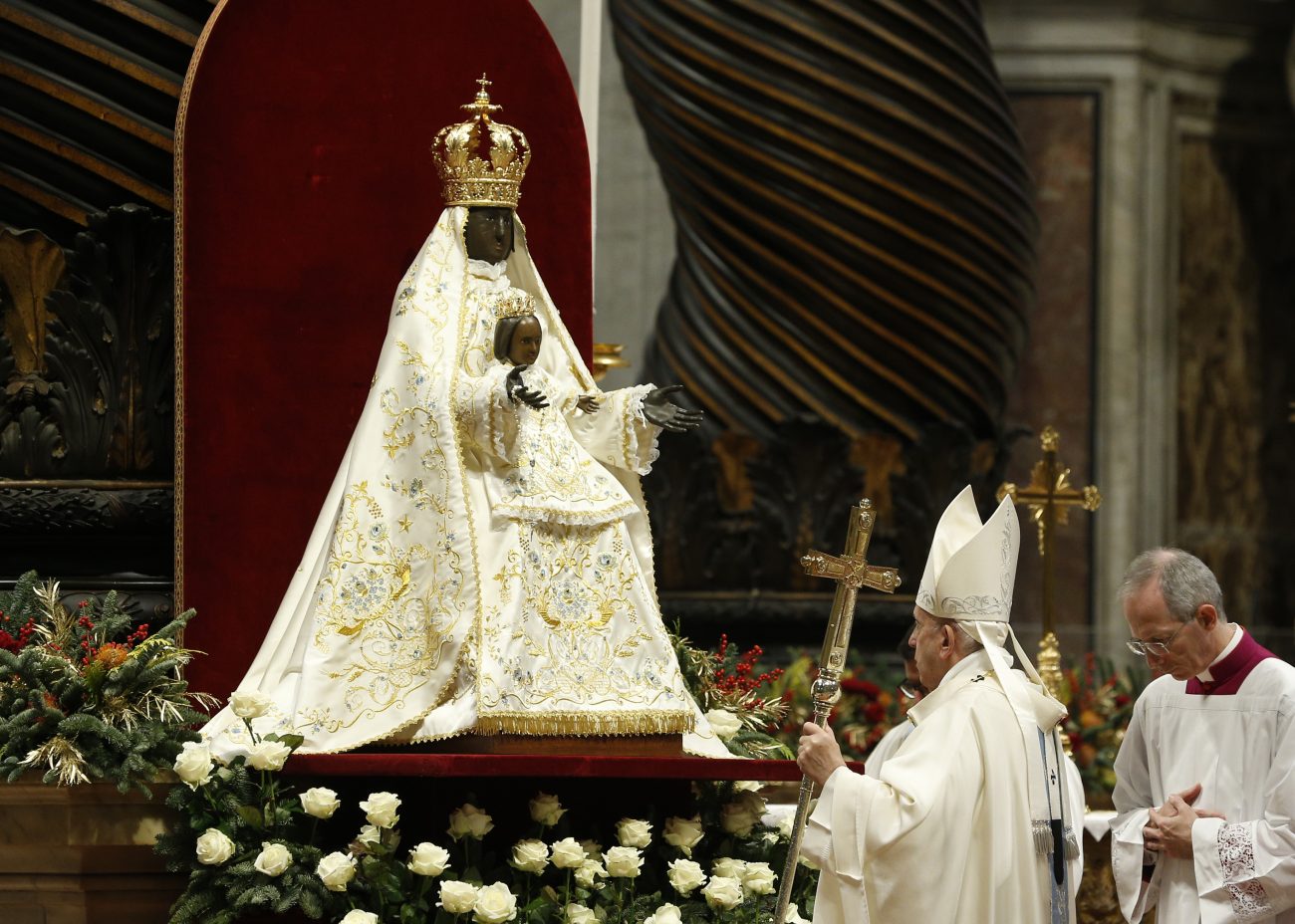 Pope Francis prays in front of a statue known as Mary Mother of God, Crowned, at the conclusion of Mass on the feast of Mary, Mother of God, in St. Peter’s Basilica at the Vatican Jan. 1, 2020. The Marian statue was brought to the Vatican from Foggia in southern Italy. According to legend, Mary appeared to a nobleman in the year 1001 and showed him the dark wooden statue. (CNS photo/Paul Haring)

VATICAN CITY (CNS) — The world will not know peace unless there is an end to violence against women, the exploitation of their bodies and the denial of their dignity, Pope Francis said on the feast of Mary, Mother of God.

Celebrating Mass Jan. 1 for the feast day and the World Day of Peace, the pope said: “If we want a better world that is a house of peace and not a courtyard of war, we must take to heart the dignity of every woman.”

Jesus, the prince of peace, was born of a woman, he said. “The woman is a giver and mediator of peace and must be fully involved in decision-making processes because when women can share their gifts, the world will find itself more united and more at peace.”

The Christmas season and the feast of Mary, Mother of God, he said, are celebrations of the great gift of God sending his son into the world as a human baby, born of a woman so that he would have the same human flesh of all those he came to save.

Catholics begin the new year honoring Mary, the “woman who wove the humanity of God,” the pope said. “If we want to weave humanity into the plot of our days, we must start from the woman.”

“Women are the source of life, yet they are continually offended, beaten, molested, coerced into prostitution and to terminate the life they carry in their wombs,” the pope said.

“Every violence inflicted on a woman is a profanation of God, who was born of a woman,” he said. “Humanity’s salvation was accomplished through the body of a woman; how we treat a woman’s body is an indication of our level of humanity.”

It’s not just violence, the pope said. “The body of the woman is sacrificed on the profane altars of advertising, profit, pornography, exploited like a thing to use.”

“Today maternity is humiliated because the only growth that interests people is economic growth,” he said.

Pope Francis also drew attention to migrant women, “mothers who risk arduous journeys desperately seeking a better future only to be judged as excess numbers by people who have a belly full of things and a heart empty of love.”

The newborn Jesus received his first caresses from Mary and exchanged his first smiles with her, the pope said. “With her, he inaugurated the revolution of tenderness. The church, looking upon baby Jesus, is called to continue it.”

By drawing closer to Mary, he said, the church will become more of what it is meant to be, more focused on Jesus and more united.

“The enemy of human nature, the devil, seeks to divide it,” the pope said. The devil entices people to put their “differences, ideologies, thoughts of sides and parties” first.

“Structures, programs and tendencies, ideologies and functions” may tell people something about the church, he said, but those are not “the heart of the church, because the church has the heart of a mother.”

“We her children today invoke the Mother of God who unites us as a believing people,” he said, praying: “O Mother, generate in us hope, bring us unity. Woman of salvation, we entrust this year to you, watch over it in your heart.”