Amid threat of war, world must not give up hope, pope tells diplomats 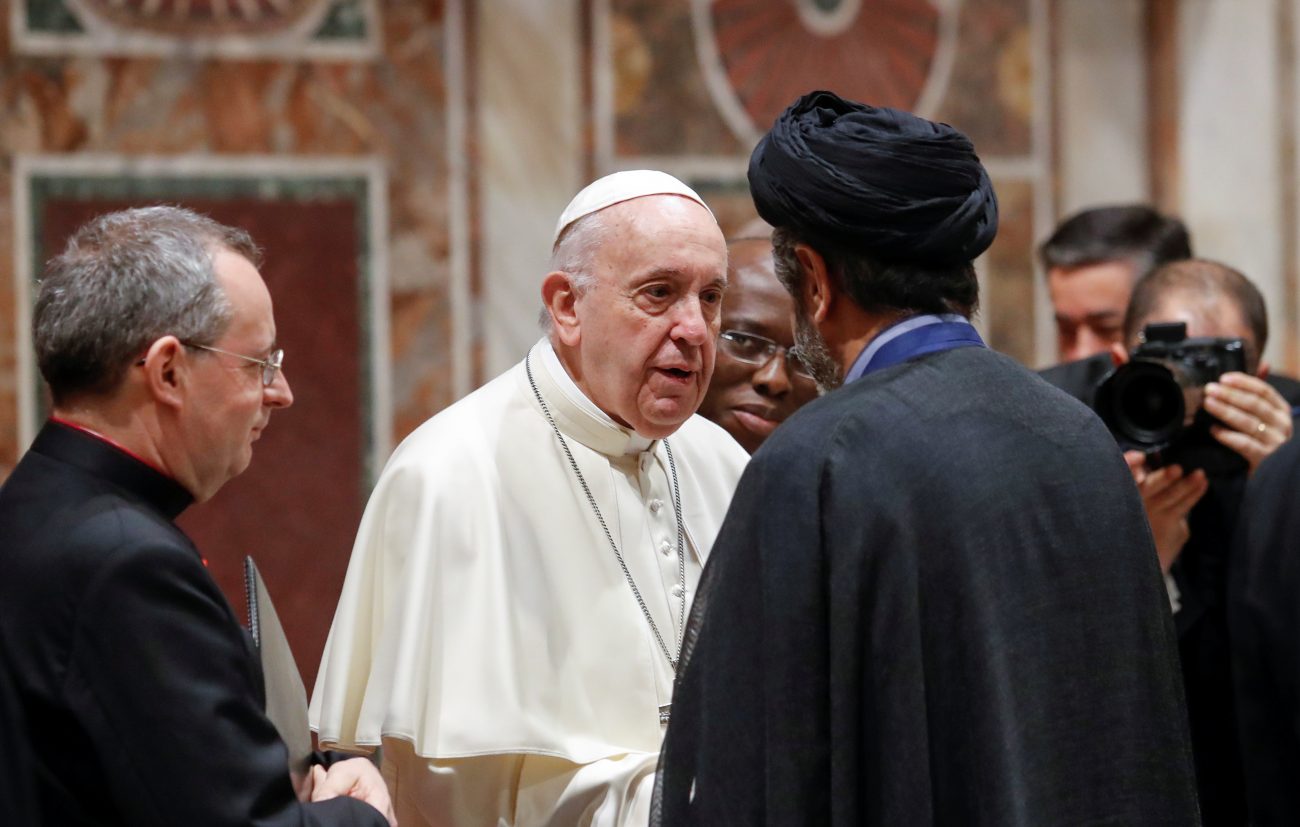 Pope Francis speaks with Iran’s ambassador to the Holy See, Seyed Taha Hashemi, during an audience for the traditional exchange of new year’s greetings in the Sala Regia at the Vatican Jan. 9, 2020. (CNS photo/Remo Casilli, Reuters pool)

VATICAN CITY (CNS) — Hope is the virtue needed to approach the coming year, especially when the looming threat of war surrounds a humanity scarred by violence, Pope Francis said.

During his annual address to diplomats accredited to the Vatican, the pope said that with heightened tensions and acts of violence on the rise, the “new year does not seem to be marked by encouraging signs.”

Nevertheless, acknowledging the challenges confronting the world today and courageously finding ways to resolve them open a path to hope, he said in his speech Jan. 9.

“Precisely in light of these situations, we cannot give up hope,” the pope said. “And hope requires courage. It means acknowledging that evil, suffering and death will not have the last word and that even the most complex questions can and must be faced and resolved.”

Among the most “troubling” conflicts emerging, he noted, are the increasing tensions between the United States and Iran, which not only compromise the efforts to rebuild Iraq, but also set “the groundwork for a vaster conflict that all of us would want to avert.”

“I therefore renew my appeal that all the interested parties avoid an escalation of the conflict and keep alive the flame of dialogue and self-restraint, in full respect of international law,” he said.

In his nearly one-hour speech to the diplomats, the pope reflected on the foreign trips he made over the previous year, as well as the major events and issues that emerged in 2019.

While his visit to Panama last January for World Youth Day highlighted the joy brought by young people “brimming with dreams and hopes” for the future, the pope said the Vatican summit on clergy sex abuse the following month painfully showed how young people can be robbed of that future.

Sexual abuse committed by members of the clergy and laity “are crimes that offend God, cause physical, psychological and spiritual damage to their victims and damage the life of whole communities,” he said.

The pope renewed the church’s commitment to not only bringing to light past cases of abuse, but also to ensure that such cases are dealt with in “accordance with canon law and in cooperation with civil authorities on the local and international level.”

Young people, he continued, also have brought significant attention to the issue of climate change, which “ought to be a concern for everyone and not the object of ideological conflict between different views of reality or, much less, between generations.”

“The protection of the home given to us by the Creator cannot be neglected or reduced to an elitist concern,” the pope said. “Young people are telling us that this cannot be the case, for at every level we are being urgently challenged to protect our common home and to bring the whole human family together to seek a sustainable and integral development.”

He also addressed the political crises in Latin America, including Venezuela, where he said he hoped “efforts to seek solutions will continue.”

“Greater polarization does not help to resolve the real and pressing problems of citizens, especially those who are poorest and most vulnerable, nor can violence, which for no reason can be employed as a means of dealing with political and social issues,” he said.

Pope Francis also expressed concern for conflicts in the Middle East, particularly in Syria and Lebanon, where growing tensions risk “endangering the fragile stability of the Middle East.”

He also called the international community to task for the “general indifference” toward the conflicts in Yemen and Libya, where intense violence “provides fertile terrain for the scourge of exploitation and human trafficking.”

Another sad consequence of such conflicts, he lamented, are the thousands of people requesting asylum who often risk their lives “in perilous journeys by land and above all by sea.”

“It is painful to acknowledge that the Mediterranean Sea continues to be a vast cemetery,” the pope said.

However, he said, the church is hopeful of efforts “made by countries to share the burden of resettling refugees, in particular those fleeing from humanitarian emergencies.”

Turning his attention to Africa, the pope expressed his concern for the “continuing episodes of violence” against Christians, especially in Burkina Faso, Mali, Niger and Nigeria.

He also expressed hope for the resolution of conflicts in Sudan and Central African Republic. The pope also said he hoped to visit South Sudan this year.

Recalling his final trip of 2019, which took him to Japan, Pope Francis renewed his appeal for a world without nuclear weapons because “true peace cannot be built on the threat of a possible total annihilation of humanity.”

“These weapons do not only foster a climate of fear, suspicion and hostility,” he said. “They also destroy hope. Their use is immoral, a crime not only against the dignity of human beings but against any possible future for our common home.”

NEXT: New Year may bring new opportunities for women at Vatican