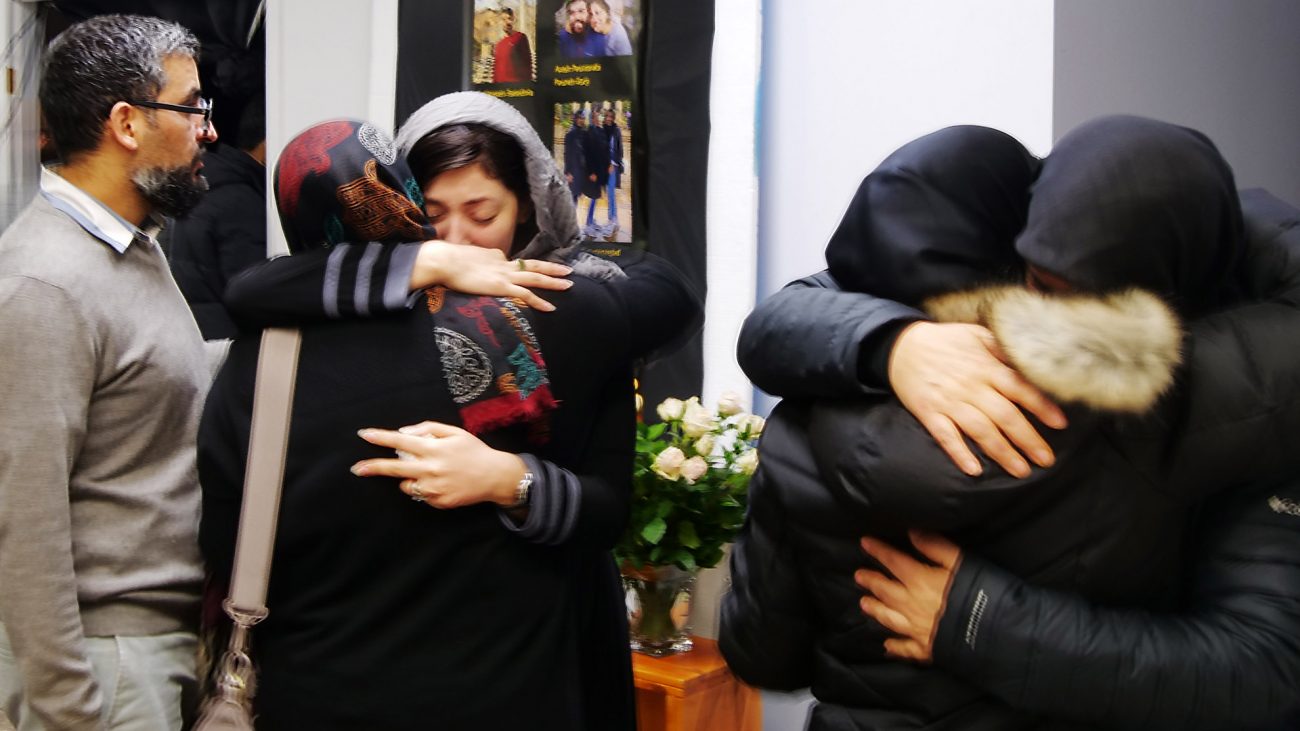 EDMONTON, Alberta (CNS) — If grief is a journey, this is the first painful step: searing heartache.

More than 2,500 people filled the Saville Community Sports Centre at the University of Alberta Jan. 12 to remember the lives of 13 Edmontonians and 163 others lost when Ukrainian Airlines International Flight PS752 was shot down by a missile shortly after takeoff from Tehran. All 176 people onboard were killed in the Jan. 8 crash, including 57 Canadians.

A day later, more than 2,000 miles away, a solemn vigil for seven students began with two students singing the haunting words of Simon and Garfunkel’s “The Sounds of Silence.” Among those they remembered were Dorsa Ghandchi, a grade 11 student at Jean Vanier Catholic High School in Richmond Hill, who was traveling with her mother, Faezeh Falsafi, and 8-year-old brother Daniel. They also remembered Dr. Farhad Niknam, a dentist who was an adult English as a Second Language student of the York Catholic District School Board. Staff members and families connected to the board also lost loved ones.

The Edmonton victims were of Iranian descent, and their lives were recalled by family and friends at the memorial, which included Persian poetry and song. They were cherished as paragons of Iranian virtues — education, patience, humor and a welcoming spirit.

They were physicians, engineers and students. One couple had just been married. Another entire family was lost. Pedram Mousavi and his wife, Mojgan Dansehmand, both engineering professors at the University of Alberta, were killed with their daughters Daria, 14, and Dorina, 9.

Hossein Saghlatoon said he has suffered other losses in his life, but the loss of Mousavi hits harder. Mousavi was his professor through his Ph.D. studies and, after graduation, they were partners in a company with other engineers.

“He was more than a boss or a friend to me. He was like a father to me. He was an important part of my life here in Canada,” Saghlatoon said.

“I’m an immigrant, and I left everyone and everything I knew or had … and he supported all the time all of us, every person who has been in his group. Everyone who, in any way, dealt with him, he was always supportive. He tried to help us, and we are missing him so much.”

The university is a particular draw for Iranian students, and the campus as a whole has come together in solidarity at this time, said Mona-Lee Feehan, the Catholic chaplain at the University of Alberta.

“There’s a huge sense of loss, but there’s also a huge sense of pride at what has been happening on our campus, about the caring and people holding each other and people looking out for each other,” said Feehan, who is also campus minister at St. Joseph’s College, the Catholic college on campus.

“It’s been an amazing show of concern and compassion that crosses boundaries of race, culture and faith.”

Feehan added: “Things are created that are not the best for us, but we have the great capacity to choose good in all of those situations. In this instance, something bad has happened, and we’ve chosen the good.”

The university memorial capped a week of remembrance, including a Jan. 11 memorial service at the Imam Hussein Islamic Society mosque, where many of the victims were regular worshippers. Amid the Muslim call to prayer, they hugged and shed tears. They paused at a memorial with photos of the victims and comforted each other in grief as they held tight to their strong Shiite Muslim faith.

“I don’t know what I would do without my faith,” said Mohi Mahmoudi, a Ph.D. student at the University of Alberta who knew the victims and had initially planned to return to Iran over Christmas. She would have been on the ill-fated flight.

“We felt that we had lost everything after that news. It was not only friends, it was family. Our faith kept our hope that we can survive through this time,” Mahmoudi said. “We all saw their pictures and we all thought we might have been on the plane. We ask God to help them through this devastating time.

“It is really a great loss for the Iranian community.”

Trudeau promised a full investigation in the crash. After days of denial, Iran has admitted that the plane was mistakenly shot down with a missile amid rising hostilities with the U.S. government.

Mahmoudi said the Iranian community was devastated when they heard the news.

Among the victims was Shekoufeh Choupannejad and her daughters, Saba and Sara. The Edmonton obstetrician was well-known in the Iranian community and delivered some of their children.

“When everybody came here to Canada and needed to visit a doctor, she was there for everyone,” Mahmoudi said.

Most mosque members knew the victims personally and their violent deaths came as a shock, said Ali Zakerhaghighi, president of the Imam Hussein Islamic Society.

“For these individuals, there is no doubt that they are blessed,” Zakerhaghighi said. “Hopefully we can have the message of patience for their families and for their friends.”

“I would say the faith of knowing that there will be life after death and all we do here, for our very short time, is to actually seek the plans for the hereafter. There is no doubt that this tragedy was something that will really take time for us to not to be emotional about anymore, but there is no way that will forget these people.”

In Richmond Hill, Ab Falconi, director of education for the York Catholic board, called it a tragedy that so many “bright lights with so much to contribute” died in such a senseless way.

Falconi said the Catholic community is praying for all the victims and “in your grief, we do stand with you.”

Board chair Maria Marchese expressed gratitude for the large number who gathered to remember victims “so young, with so much to give.”

Contributing to this story was Mickey Conlon in Richmond Hill, Ontario. Ehrkamp is news editor of Grandin Media, news website of the Archdiocese of Edmonton. Conlon is a reporter for The Catholic Register, Toronto.

NEXT: Quebec to take ethics, religious culture out of school curriculum