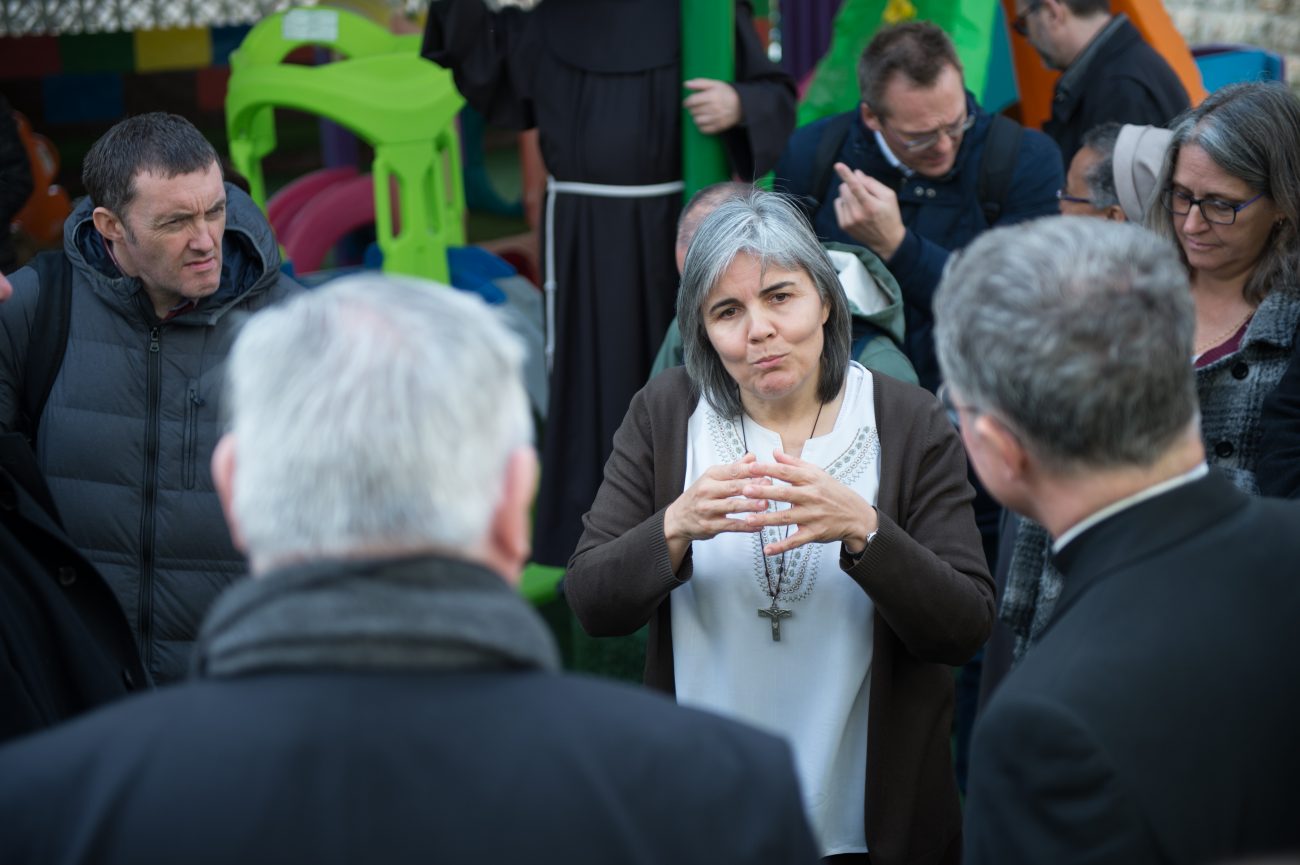 BETHANY, West Bank (CNS) — Their convent is surrounded on three sides by the Israeli separation wall, but the Comboni Sisters told visiting bishops they are trying to build bridges of peace rather than walls.

The convent, which serves as a spiritual retreat and includes the St. Mary Kindergarten, was founded in 1966 and has gone through numerous political changes since its founding on what was then Jordanian territory. But in 2004, following the outbreak of the second Palestinian uprising, the sisters were cut off from half of the population they serve by the Israeli barrier, a series of cement slabs, barbed wire fences and security roads snaking across part of the West Bank.

Two sisters live in a Christian housing project just on the other side of the wall to maintain a presence and to serve the few Christian families who have remained in the project.

A small “door” was initially opened in the wall to allow the children of the kindergarten to be passed through to the convent, but that was eventually blocked, and parents on the other side of the wall needed to take two buses, stand in line at a checkpoint, then walk 30 minutes to get to the kindergarten. It became too arduous a journey, and parents sought alternative kindergartens for their children.

The wall and military towers loom above the convent on all three sides, including over the kindergarten playground, which has been covered by a fireproof roof because of the Molotov cocktails thrown over the wall by Palestinian demonstrators during clashes with Israeli soldiers. Previous shelters have caught on fire from the Molotov cocktails, said Sister Vacas.

She said the wall near the convent is easier to jump than other spots, and Palestinians jump the barrier to reach family, jobs or health care on the other side, which is under Israeli control. This often makes the convent a flashpoint for confrontations.

“This creates a very difficult situation; soldiers come by here twice a day, and any time of the day people jump over the wall to get over to the other side,” said Sister Vacas. “But we are missionaries, and missionaries are normally on the border. It is not by chance that we are here. We are here to attempt to make ‘holes’ in the wall. Our sadness is that the soldiers are the only experience the children have of Israelis.”

The responsibility of keeping the children safe under such circumstances is very great, she added.

Sister Azezet Kidane briefed the bishops on the other work carried out by the sisters, including work with especially vulnerable Bedouin communities on the other side of the wall and working with Eritrean refugee women, trafficking survivors, in Tel Aviv. In both projects, they partner with Israeli groups and individuals, she said.

“It is very encouraging for us that you are here,” Sister Kidane told the bishops. “We see on both sides, the good and the bad. Everyone struggles, everybody wants peace. The separation from one another continues to create more fear … we try to break this wall through our works. Pray for Israelis and Palestinians to find a way to coexist. We need to be bridges.”

Archbishop Richard Gagnon of Winnipeg, Manitoba, told the sisters: “You have shown what it is to live the Gospel when there are no real answers, in circumstances beyond our control. Pope Francis spoke of going to the periphery, and you have not only gone to the periphery, but you are right there at the wall.

“You are an example of love and joy which lifts us up,” he said.

Auxiliary Bishop William Kenney of Birmingham, England, told Catholic News Service the political situation has continued to cause human suffering for Muslims, Christians and Jews, with Israelis having a deep concern for their safety.

“There is no progress, and every year I go back less hopeful than the time before,” said the bishop, who has gone on several of the annual trips, designed to show support for Christians in the Holy Land.

People-to-people connections must be created so that people can see each other in a similar light, and women can be leaders in those connections, he said.

As someone born in Northern Ireland, Bishop Alexander McGuckian of Raphoe, Ireland, said he was aware of the difficulties of divided societies.

“Authentic Christians always are in relations with both sides, as are the Comboni Sisters here right up against the wall to maintain relations with both Palestinians and Israelis. This may not seem like anything, but this is respecting the human, respecting the good in both,” he said. “We need to stand for the good in the other, always in truth. We are bringing a complex message, yet this must be at the heart of it.”

U.S. Archbishop Timothy Broglio of the Archdiocese for the Military Services noted the importance of teaching children about “the other” at an early age.

“We need to stop building walls and start reaching out together. It is incumbent on the Western world to be instruments of dialogue, so that some sort of lasting solution can be found,” he said. “This wall will continue to be a tinderbox until people can learn to live together.”