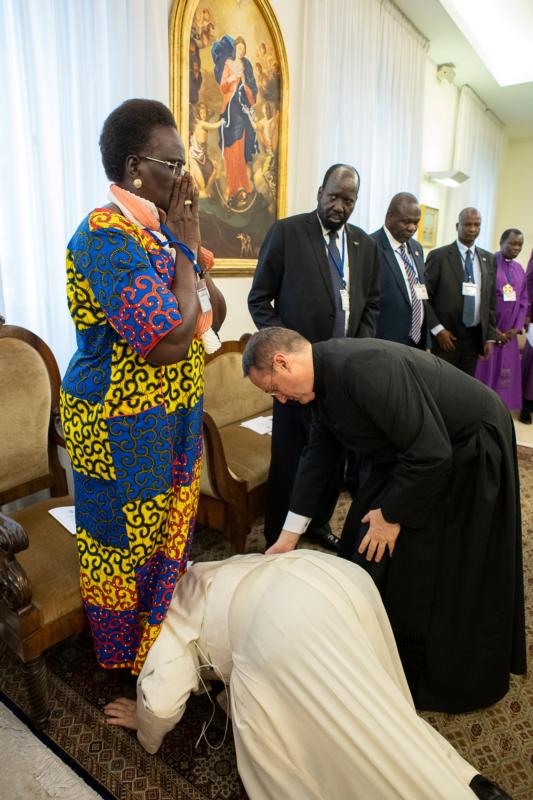 ROME (CNS) — A newly brokered peace deal between the government of South Sudan and opposition leaders increased the chance of a papal visit to the African nation.

The agreement signed in Rome Jan. 13 was significant because it involved opposition leaders who had not signed previous peace deals, said John O’Brien, country representative for Catholic Relief Services in South Sudan.

The Rome-based Sant’Edigio Community brokered the talks in Rome Jan. 11 and 12, and the agreement took effect Jan. 15. Signers included representatives of the government and the South Sudan Opposition Movements Alliance.

Pope Francis and Anglican Archbishop Justin Welby of Canterbury, spiritual leader of the Anglican Communion, have said they would travel together to South Sudan if the country’s leaders fulfill their promise to form a transitional government by late February.

The joint trip to South Sudan has been a hope of both Pope Francis and Archbishop Welby since 2016, when South Sudanese leaders of the Catholic, Anglican and Presbyterian churches visited them to explain the ongoing tensions in South Sudan. Last April, in an effort to encourage peace, Pope Francis and Archbishop Welby hosted South Sudanese President Salva Kiir and four of the nation’s would-be five vice presidents for a retreat at the Vatican. At the end of the retreat, Pope Francis knelt at their feet, begging them to give peace a chance and to be worthy “fathers of the nation.”

South Sudan’s war, which broke out in 2013, two years after the country achieved independence, has left nearly 400,000 dead and displaced nearly 4 million people.

Under the terms of a peace agreement signed in September 2018, South Sudan’s vice presidents were to take office together last spring, sharing power and ending the armed conflict between clans and among communities. The formation of the government was delayed until Nov. 12, but just five days before the deadline, South Sudanese President Salva Kiir and opposition leader Riek Machar announced a further delay until February. This was agreed to by international leaders.

In the agreement signed Jan. 13 in Rome, the South Sudanese said they were “humbled by the relentless spiritual and moral appeal for peace, reconciliation and fraternity by Pope Francis” and other religious leaders.

Barnaba Marial Benjamin, head of the government delegation, told Vatican Radio the leaders could feel the spirit of Pope Francis in the room as the agreement was being discussed.

He told Vatican Radio leaders must find solutions to crucial questions regarding elections, boundaries, good governance, accountability for crimes committed, transparency in the management of resources in the country and fighting corruption.

NEXT: Comboni Sisters in West Bank build bridges amid walls