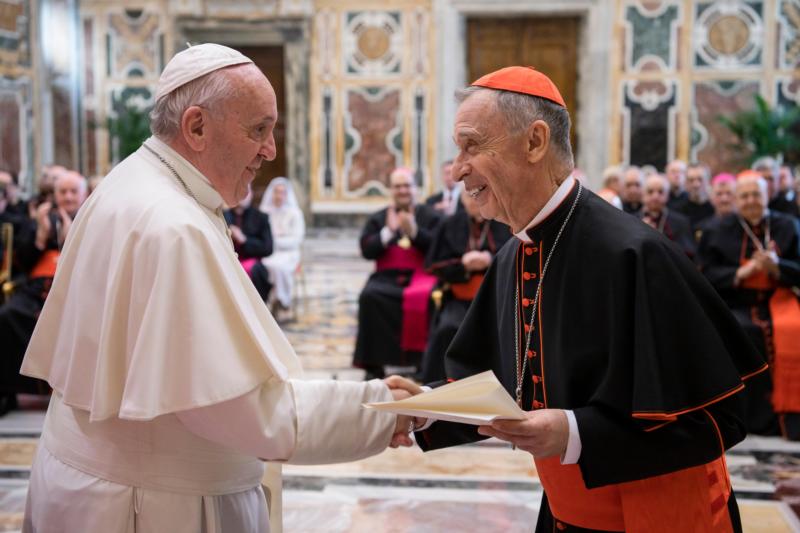 Pope Francis greets Cardinal Luis Ladara, prefect of the Congregation for the Doctrine of the Faith, at the Vatican Jan. 30, 2020, during the congregation's plenary meeting. (CNS photo/Vatican Media)

VATICAN CITY (CNS) — Christian doctrine is not modified to keep up with passing times nor is it rigidly closed in on itself, Pope Francis told members and advisers of the doctrinal congregation.

“It is a dynamic reality that, staying faithful to its foundation, is renewed from generation to generation and is summed up in one face, one body and one name — the risen Jesus Christ,” he said.

“Christian doctrine is not a system that is rigid and closed in on itself, but neither is it an ideology that transforms with the changing of seasons,” he said Jan. 30, during an audience with cardinals, bishops, priests and laypeople who were taking part in the plenary assembly of the Congregation for the Doctrine of the Faith.

The pope told them that is was thanks to the Risen Christ that the Christian faith throws its doors wide open to every person and his or her needs.

That is why handing on the faith “demands taking into account the person receiving it,” and that this person be known and loved, he said.

In fact, the congregation was using its plenary to discuss a document on the care of people experiencing the critical stages of a terminal illness.

The aim of the document, said Cardinal Luis Ladaria, congregation prefect, is to reiterate “the fundamentals” of church teaching and offer “precise and concrete pastoral guidelines” regarding the care and assistance of those at a very “delicate and crucial” stage in life.

Pope Francis said their reflections were essential, particularly at a time when the modern era “is progressively eroding the understanding of what makes human life precious” by judging the value or worthiness of life according to how useful or efficient that person may be.

The story of the good Samaritan teaches that what is needed is conversion to compassion, he said.

“Because many times people who look don’t see. Why? Because they lack compassion,” he said, noting how often the Bible repeatedly describes Jesus’ heart “being moved” with pity or compassion for those he encounters.

“Without compassion, people who see do not get involved with what they observe, and they keep going. Instead, people who have a compassionate heart are touched and engaged, they stop and take care” of the other, he said.

The pope praised the work done by hospices and asked them to continue to be places where professionals practice a “therapy of dignity” with commitment, love and respect for life.

He also underlined how important human relationships and interactions are in caring for the terminally ill, and how that approach must operate from a duty “to never abandon anyone facing an incurable disease.”

The pope also thanked the congregation for its work studying the revision of norms concerning “delicta graviora,” that is, “more grave crimes” against church law, which include the abuse of minors.

The congregation’s work, he said, is part of an effort “in the right direction” of updating norms so that procedures can be more effective in responding to “new situations and issues.”

He encouraged them to continue “with firmness” and proceed with “rigor and transparency” in safeguarding the sanctity of the sacraments and those whose human dignity has been violated.

In his opening remarks, Cardinal Ladaria told the pope that the congregation has examined “a project of a revision” of St. John Paul II’s motu proprio, “Sacramentorum sanctitatis tutela,” which gave the doctrinal congregation responsibility to deal with and judge allegations of the sexual abuse of minors by clergy and other serious crimes in the realm of canon law.

The cardinal said they also discussed during the plenary the work carried out by the disciplinary section, which handles abuse cases and has seen a noticeable increase of cases in the past year.

Msgr. John Kennedy, head of the section, told the Associated Press Dec. 20 that the office registered a record 1,000 reported cases for 2019.

The huge number of cases has “overwhelmed” the personnel, he said.

Telling the pope about some of the documents the congregation has published the past two years, Cardinal Ladaria also said it had issued a “private,” that is, unpublished, clarification on “some canonical questions regarding transsexuality.”

NEXT: Pope meets president of Argentina; no news of papal trip home