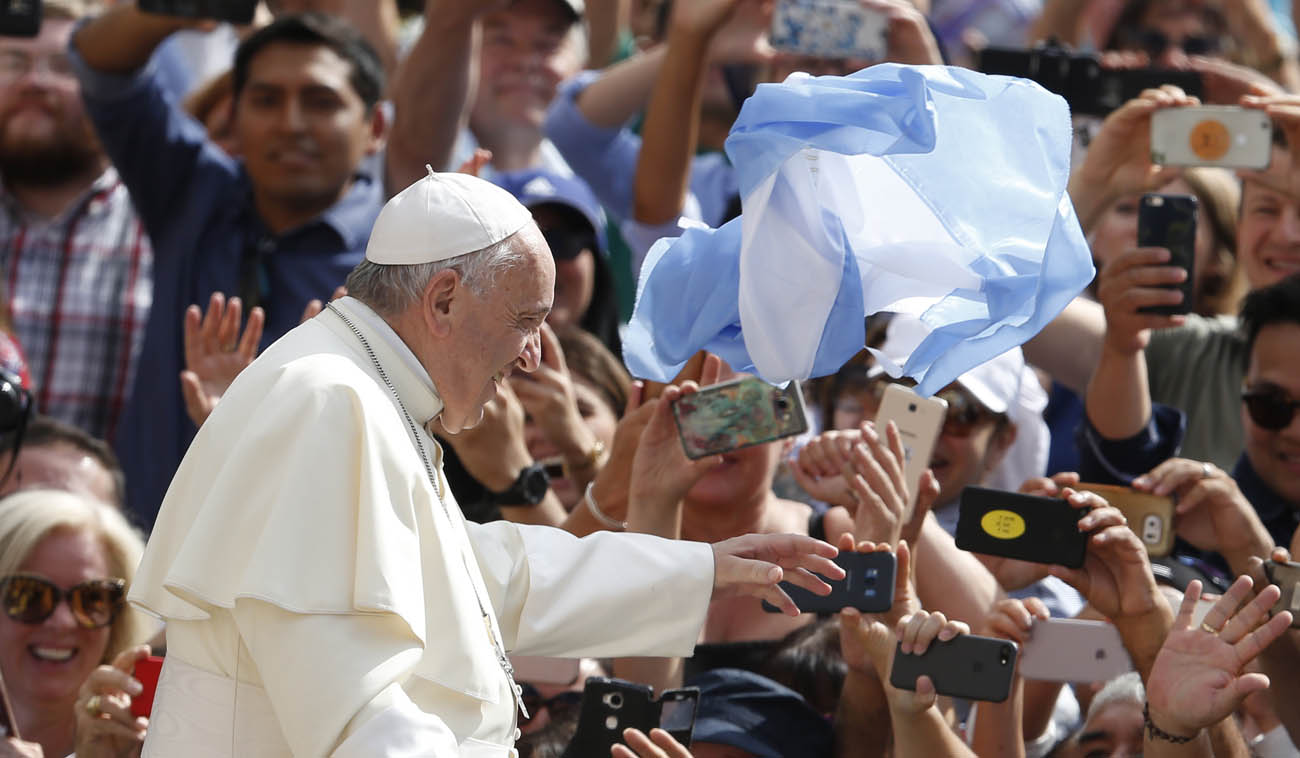 An item with the national colors of Argentina is thrown at Pope Francis as he greets the crowd during his general audience in St. Peter’s Square at the Vatican June 13, 2018. The pope, a native of Argentina, has not returned to his homeland since his election in 2013. (CNS photo/Paul Haring)

VATICAN CITY (CNS) — Pope Francis met Argentina’s new president, Alberto Fernandez, amid widespread speculation that they would talk about the pope finally returning to his homeland for a visit.

Fernandez told reporters later Jan. 31 that they did not discuss a trip during their 45-minute private conversation, since the pope knows he is welcome home any time. Pope Francis left in March 2013 to attend the conclave to elect a successor to Pope Benedict XVI and has not returned since he was elected.

According to a Vatican statement, the two spoke about “problems such as the economic-financial crisis, the fight against poverty, corruption and drug trafficking, efforts to build up society, and the protection of life from conception.”

The summary Fernandez offered focused on his country’s economic crisis and divisions within Argentine society.

Reporters present in the papal library before and after the private meeting described the mood as friendly and relaxed.

And, in fact, after giving Fernandez a collection of the documents he has written, Pope Francis opened his apostolic exhortation, “Rejoice and Be Glad,” and went directly to the footnotes, where he quoted St. Thomas More’s “Prayer for Good Humor.”

The pope read the entire prayer out loud:

“Grant me, O Lord, good digestion, and also something to digest. Grant me a healthy body, and the necessary good humor to maintain it. Grant me a simple soul that knows to treasure all that is good and that doesn’t frighten easily at the sight of evil, but rather finds the means to put things back in their place. Give me a soul that knows not boredom, grumbling, sighs and laments, nor excess of stress, because of that obstructing thing called ‘I.’ Grant me, O Lord, a sense of good humor. Allow me the grace to be able to take a joke and to discover in life a bit of joy, and to be able to share it with others.”

NEXT: French cardinal to offer resignation, despite abuse acquittal