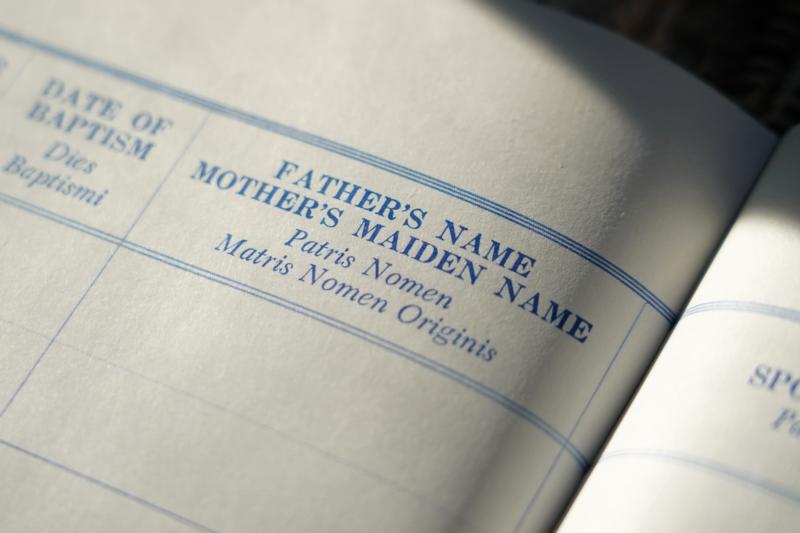 Pictured is a blank page from a traditional baptismal register. The French bishops' permanent council has approved a recommendation to remove gender references for parents on baptismal certificates so the church complies with equality laws. (CNS photo/Gregory A. Shemitz)

Bishop Joseph de Metz-Noblat of Langres, president of the French bishops’ Council for Canonical Questions, said the changes were made to bring baptismal practices into line with new gender-equality laws.

In a letter to bishops dated Dec. 13, 2018, and published at the end of 2019, Bishop Metz-Noblat said the “ever-more-complex situation of families in France” had made compiling Catholic documents “sometimes difficult,” especially with baptisms.

He added that his council had worked with the two other bishops’ conference commissions to produce a new baptismal formula, referring to “parents or other holders of parental authority.”

The reformulation was designed to avoid any moral judgment and help dioceses confronted with problems of vocabulary, the bishop said. He added that the reformulation had now been approved by the bishops’ permanent council.

“According to canon law, ministers cannot refuse sacraments to persons who opportunely ask for them, while children cannot be held responsible for the situation of their parents,” Bishop Metz-Noblat said. “This is why we are recommending you adopt this formulation, which seems more suited to our epoch.”

However, some French Catholics have criticized the new recommendations.

“It’s strange the church is being advised to adapt to state laws this way — I see no need for it,” said Antoine Renard, honorary president of the Federation of Catholic Family Associations. “The church teaches families are created by fathers and mothers, and that other forms are not families. Lesbian and other couples could demand otherwise, but this won’t be accepted by the church.”

In a Jan. 10 interview with Catholic News Service, Renard said the church could not “refuse baptisms,” but required parents seeking the sacrament to commit to “raise children according to church rules.”

Msgr. Claude Barthe, editor of the conservative Catholic Res Novae monthly, said in late-December article that some French dioceses would probably ignore the recommendation. He said the Catholic Church appeared to be anticipating legal problems it had “not yet encountered,” adding that the proposed changes risked “turning the exception into the norm.”

Same-sex marriage and child adoption were legalized in France in May 2013. A bioethics law allowing state-funded medically assisted procreation for single mothers and lesbian couples was approved in the National Assembly in October, despite opposition by the Catholic Church.

French media said civil birth registries had not yet been substantially adjusted to the new laws, although some politicians had proposed inserting the terms “parent 1” and “parent 2.”